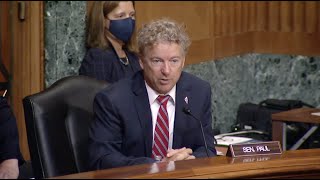 Sen. Rand Paul, R-Ky., on Sunday claimed statistical “fraud” was found in four states where President Donald Trump lost in the presidential election during supposed “data dumps” in the middle of the night and early morning.

“Interesting . . . Trump margin of “defeat” in 4 states occurred in 4 data dumps between 1:34-6:31 AM,” the Republican Senator tweeted. “Statistical anomaly? Fraud? Look at the evidence and decide for yourself. (That is, if Big Tech allows u to read this)”

By Sunday afternoon, the tweet was flagged with the warning: “This claim about election fraud is disputed.”

The tweet included a link to an article, “Anomalies in Vote Counts and Their Effects on Election 2020,” which aimed to demonstrate how Democratic candidate Joe Biden supposedly received “vote spikes” in the early hours of Nov. 4, 2020.

These supposed “vote spikes” occurred in Michigan, Wisconsin, and Georgia, according to the analysis. It goes on to argue, that these vote spikes in favor of Biden cut into Trump’s lead – claims that echo the president’s own unsubstantiated claims.

Biden earned 306 electoral votes to Trump's 232, the same margin that Trump had when he beat Hillary Clinton in 2016, which he repeatedly described as a "landslide." (Trump ended up with 304 electoral votes because two electors defected.) Biden achieved victory by prevailing in key states such as Pennsylvania, Michigan, Wisconsin, Arizona and Georgia.

Trump's allegations of massive voting fraud have been refuted by a variety of judges, state election officials and an arm of his own administration's Homeland Security Department. Many of his campaign's lawsuits across the country have been thrown out of court.

No case has established irregularities of a scale that would change the outcome. Lawsuits that remain do not contain evidence that would flip the result.