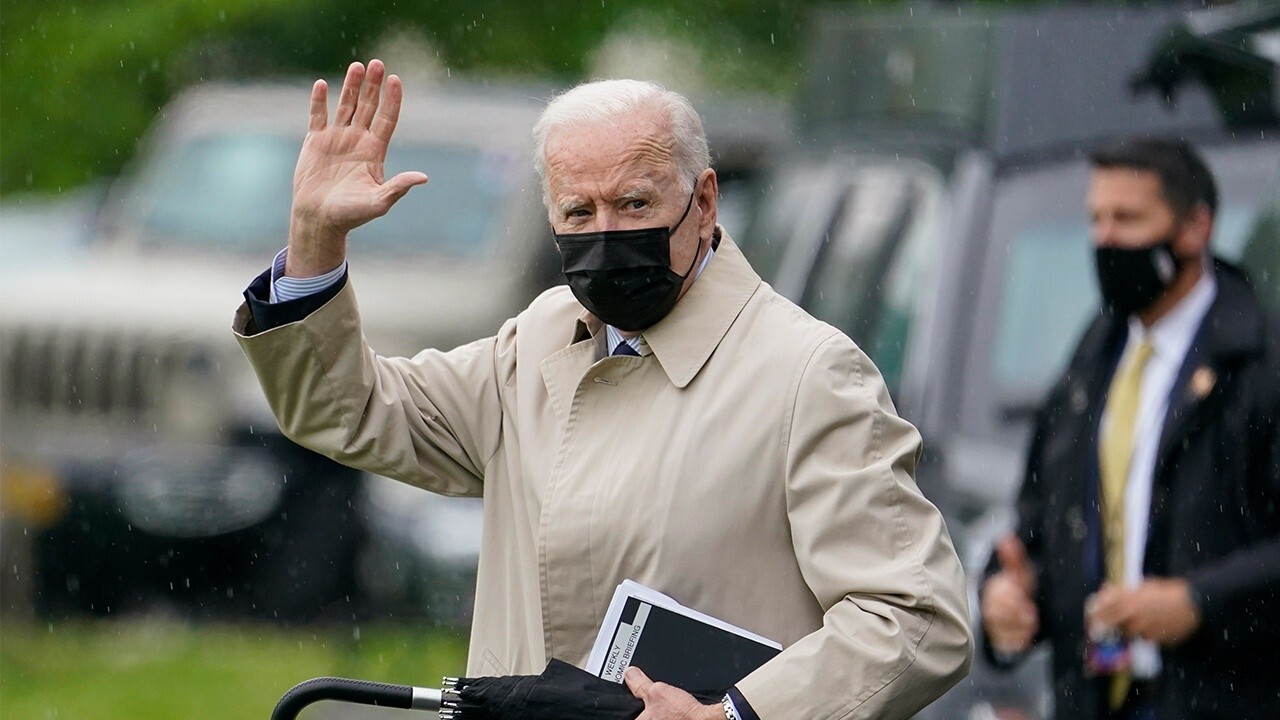 A massive blue bin, stuffed with plump, ridged pumpkins appeared in a basement hallway of the U.S. Capitol shortly after President Biden began a conclave with House Democrats about his struggling domestic agenda late last week.

Three junior aides pushed the bin down the dark, dingy corridor, just past where the leader of the free world made his appeal to Democrats to pass an infrastructure bill and his $1.75 trillion social spending package.

"We badly need a vote on both of these measures," the president implored his fellow Democrats. "I need you to help me. I need your votes."

There was no explanation about the destination of the pumpkins appearing just outside of the very room where the president beseeched his colleagues for help.

But there were jokes about the massive, winter squashes showing up just as Biden spoke a few feet away.

Perhaps if lawmakers didn’t vote soon, the bills would turn into a pumpkin.

It’s rare for a president to come to Capitol Hill to meet with members of his own party – and then lawmakers not vote on a major initiative. It’s even rarer for that to happen twice in as many months. Such was the case during Biden’s return visit to the Capitol last week. The president made a similar entreaty in late September when everyone thought the House would vote on the infrastructure and social spending bills then.

Shakespeare wrote about "the winter of our discontent." For Democrats, try autumn. Or, it may in fact be winter at this rate.

House Democrats left the meeting last Thursday hoping they would vote by nightfall on the infrastructure plan and even the social spending plan.

"I’ve got the impression they want to get everything done today," said Rep. Mike Quigley, D-Ill., as he walked out of the session.

That would have been a Herculean task – especially without the final bill text and a price tag from the Congressional Budget Office. That’s to say nothing of progressives arguing that they lacked a commitment from Sens. Joe Manchin, D-W.Va., and Kyrsten Sinema, D-Ariz.

"We need something a little bit more than just something on the back of an envelope," said Rep. Alexandria Ocasio-Cortez, D-N.Y. "There’s been so many changes in this process. So many people doing the Hokey Pokey. One foot in and one foot out."

That’s what it’s all about.

"We need both of the bills to ride together. And we don’t have that right now," complained Bush. "Also, I feel a little bamboozled because this is not what I thought was coming today."

OSSOFF, WARNOCK PUSH MEDICAID EXPANSION IN RECONCILIATION BILL: ‘NO SENATOR’S VOTE SHOULD BE TAKEN FOR GRANTED'

Bush should have waited until Monday afternoon.

That’s when Manchin called a rare press conference in the Senate Radio-TV Gallery Studio of the Capitol.

You know how flocks of birds and geese are so big when they migrate south that meteorologists actually see them on the radar? The perpetual, mobile scrum of reporters that follows Manchin around Capitol Hill these days is so large it’s a wonder those reporters haven’t shown up on the Doppler of one of the Washington, D.C., TV stations.

Manchin has made various, if at times, vague statements, about where he stands on the social spending package. A case in point came last week. Liberals were trying to shoehorn a provision into the bill to slap billionaires with a surcharge. Manchin said he opposed taxing billionaires that way because it singled them out. He also thought such a tax would penalize them from investment. Later in the day, Manchin appeared to switch his stance.

"No. No. No. No. Listen," Manchin implored reporters. "The only thing I can tell you is that everyone should pay."

Rep. Alexandria Ocasio-Cortez arrives for a meeting on Capitol Hill in Washington on Oct. 1, 2021, with President Biden and Democratic lawmakers to discuss his bipartisan infrastructure bill. REUTERS/Tom Brenner

So, after weeks of progressives holding the infrastructure bill hostage until they got signoff from the Senate, Manchin boomeranged the tactic on members of his own party.

He wanted everyone to hear directly what he was saying. This wasn’t some off-hand comment in the hall or by the Senate elevator that was subject to interpretation. That’s why Manchin called a press conference – where he gave a brief, blunt statement and took no questions.

Manchin used most of his time at the lectern to upbraid his colleagues on the left.

"It’s time to pass a bill and quit playing games," said Manchin of the infrastructure package. "It’s obvious compromise is not good enough for a lot of my colleagues in Congress. It’s all or nothing. And their position doesn’t seem to change unless we agree to everything. Enough is enough."

Manchin argued that he needed a final price tag on the social spending package from the Congressional Budget Office (CBO), worrying that "shell games" and "budget gimmicks" could double the price of the bill.

The move was vintage Manchin.

Time and time again, on major bills over the past few years, people on Capitol Hill have thought a bill was almost on the precipice of passing – only to have Manchin swoop in at the final moment and make demands. Then, after some handwringing, Manchin would walk away a few days later with what he could present as changes that were essential to secure his vote.

Progressives thought they were ready to go on the infrastructure and social spending bills. Progressives finally signed off on the plan.

House Progressive Caucus Chairwoman Rep. Pramila Jayapal, D-Wash., began to soften her stance about not having a final agreement with the Senate first. Rather than insisting on an agreement signed in all but Senate blood, Jayapal shifted her attention to President Biden.

"We are ready to say we trust you, Mr. President," said Jayapal. "You said you could get 51 votes and we've got enough of the other information that we are ready to go forward with that."

House Budget Committee Chairman John Yarmuth, D-Ky., said it would take a week to 10 days to get a full score from the CBO.

"I don’t know what he’s talking about," said Durbin. "I say, at some point, close the deal."

"Trust is a hard thing," offered Sen. Jon Tester, D-Mont., "You don’t want to give people excuses to vote against the (infrastructure bill) or against reconciliation (the social spending bill). So let’s just get it done."

If Manchin can slow down the process, he can present that as a victory for him. If they make some changes, Manchin can argue that he was the one who improved the bill. Moreover, there is an optics opportunity in this turn of events for Democrats. The party can look as though they softened the bill at the behest of moderates, not beefed it up at the wishes of progressives.

Manchin can also suggest he rolled liberals rather than the other way around. That’s good for the party.

This is why there’s a dispute between both wings of the Democratic Party on Capitol Hill.

This is what drives the left crazy about Manchin – even though they need his vote so much.

"It’s a clever strategy by people who are elected. They make commitments to their constituents and they figure in the end, ‘Here’s my opportunity to get my idea in there or get something out of it,’" said Thomas Kahn, a distinguished fellow at American University and longtime former House Budget Committee aide. "Frankly, I think the longer this drags out, the more opportunities people will see to do that."

This is why whatever the House passes, probably gets altered by the Senate. That’s because of special Senate budget rules. That means the House and Senate aren’t in alignment. The Senate must then ship the social spending package back to the House with its changes. It’s unknown if that could create problems for final passage.

Won’t the bills have turned into a pumpkin by then?

At this rate, they’ll be wheeling those pumpkins through the basement of the Capitol again. Perhaps for pumpkin pie at Thanksgiving. Or, even Christmas.

And frankly, that’s probably the new timing on finishing the social spending bill.