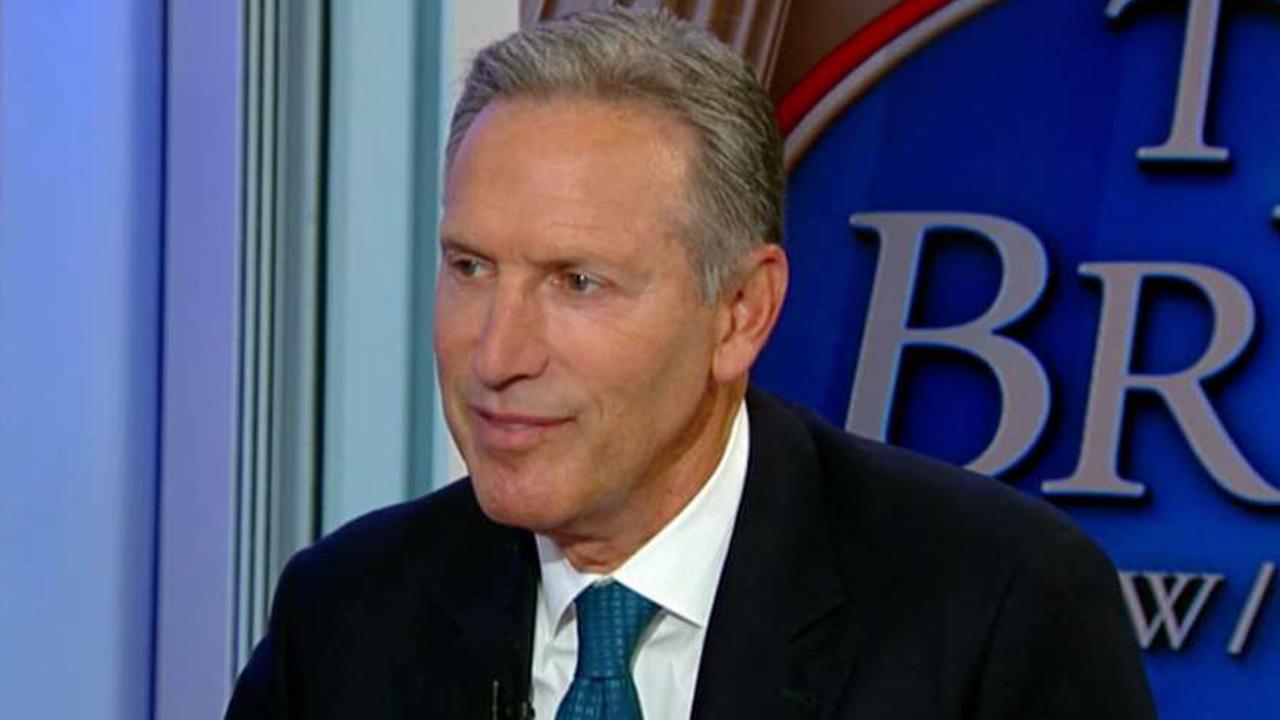 Former Starbucks CEO Howard Schultz says that if he launches an independent White House run it is more likely that lifelong Republicans would vote for him than Democrats.

Back in January FOX Business reported that Howard Schultz was getting burned like a bad cup of Starbucks coffee and it may force him to rethink his presidential aspirations. But for now, he is still a potential contender for 2020 and will speak at a town hall in Kansas City which will air on Fox News Channel at 6:30 P.M. ET on Thursday.

As previously reported, the billionaire and former Starbucks CEO has told advisors that he was shocked by the stridency of the attacks made by Democrats following the announcement he was seriously considering running for president as an independent in the 2020 election, and is now said to be looking more closely at whether he wants to go through with the effort, the FOX Business Network has learned.

Schultz has been the recipient in recent days of an angry backlash by leading Democrats after he announced he was exploring running as an independent last Sunday during a 60 Minutes interview. Schultz once described himself as a lifelong Democrat but said he now may break with his old party because he feels it has moved too far to the left on spending and taxes, while promoting programs that will saddle future generations with enormous debt.

The reason for the rapid, and at times, nasty Democratic response is less about what Schultz stands for, and more about how he might impact the 2020 election: If he runs for president as an independent, Schultz is expected to draw votes from the Democratic nominee because of his progressive social positions, thus aiding Republican President Donald Trump’s re-election effort when the president suffers from chronically abysmal approval ratings.

Among Schultz’s most prominent critics has been fellow billionaire and former New York City Mayor Mike Bloomberg, himself a possible 2020 Democratic contender. Bloomberg, who also once considered an independent presidential bid, issued a statement that said if Schultz goes that route it will “just split the anti-Trump vote and end up re-electing the president.”

The intense nature of the criticism stunned Schultz, people close to him tell FOX Business. While he expected some carping, he did not foresee the ferocity of some of the vitriol, particularly from the party’s top officials and operatives. In addition to the barrage of criticism from leading Democrats, Schultz was also blindsided by the grass roots blowback, including being heckled during an event in New York City to promote his new book.

One person with knowledge of Schultz’s reaction to the attacks said he is “freaking out” about the criticism; another person described Schultz as being “surprised” by the severity of the Democratic Party backlash.

According to Schultz advisor Bill Burton, “There is a big difference between the noise coming out of the beltway and what the American people are telling us. And while there has been a lot of shouting from the professional political class, Howard is undeterred. These issues are too important to let to let the loudest voices decide them before the American people have their say.”What people who have spoken with Schultz agree on is that he is now readjusting his message about the likelihood of an independent presidential campaign. During the 60 Minutes interview, Schultz seemed to be leaning in the direction of entering the race, stating the he is “seriously thinking of running for president…as a centrist independent.”

But a senior advisor to Schultz told FOX Business on Thursday that Schultz’s decision is far from final—and he won’t make up his mind until at least the summer. This person, who spoke on the condition of anonymity, said Schultz is weighing several factors including how people outside the “Washington to New York Amtrak corridor” react to his ideas during events as he sells his new book, "From the Ground Up: A Journey to Reimagine the Promise of America." Schultz’s memoir describes his working-class upbringing, business career, and the philosophy that underpins his beef with the political extremes he believes control both parties to the detriment of the country and may prod him to run for president.

The advisor added that Schultz has studied one of the barriers to entry for any independent candidate: The laborious process of getting on all the state ballots and he said Schultz believes that won’t present a significant obstacle. The bigger issues for Schultz is whether his message will resonate and whether he will win.

Schultz, 65, is a New York City native who grew up in subsidized housing in the borough of Brooklyn. He went to college on a football scholarship, joined Starbucks in the early-1980s and was soon named its marketing chief, before rising to the position of chief executive. As CEO, he transformed the coffeehouse chain into one of the country’s fastest growing companies.

He left Starbucks for good in 2018, but was already commenting on political issues before then—in 2016 he endorsed Hillary Clinton over Trump in the 2016 presidential election—foreshadowing a career in politics.

Schultz has been a vocal critic of Trump, mainly of his fiscal policies as they relate to the ballooning budget deficit, but he has made his biggest headlines recently opposing the Democratic Party’s embrace of progressive causes, such as universal health care and efforts to ramp up taxes on the rich.

He has said the major reason for his possible third-party candidacy is that most Americans don’t agree with the extremes of both parties that currently control the political debate.

That was the message he presented when he announced his possible candidacy as an independent. The message he got back from his old friends in the Democratic Party was swift and direct: Don’t do it because you will be messing with our best chance to win in 2020.

*This article, originally published on 1-31-19, has been updated.