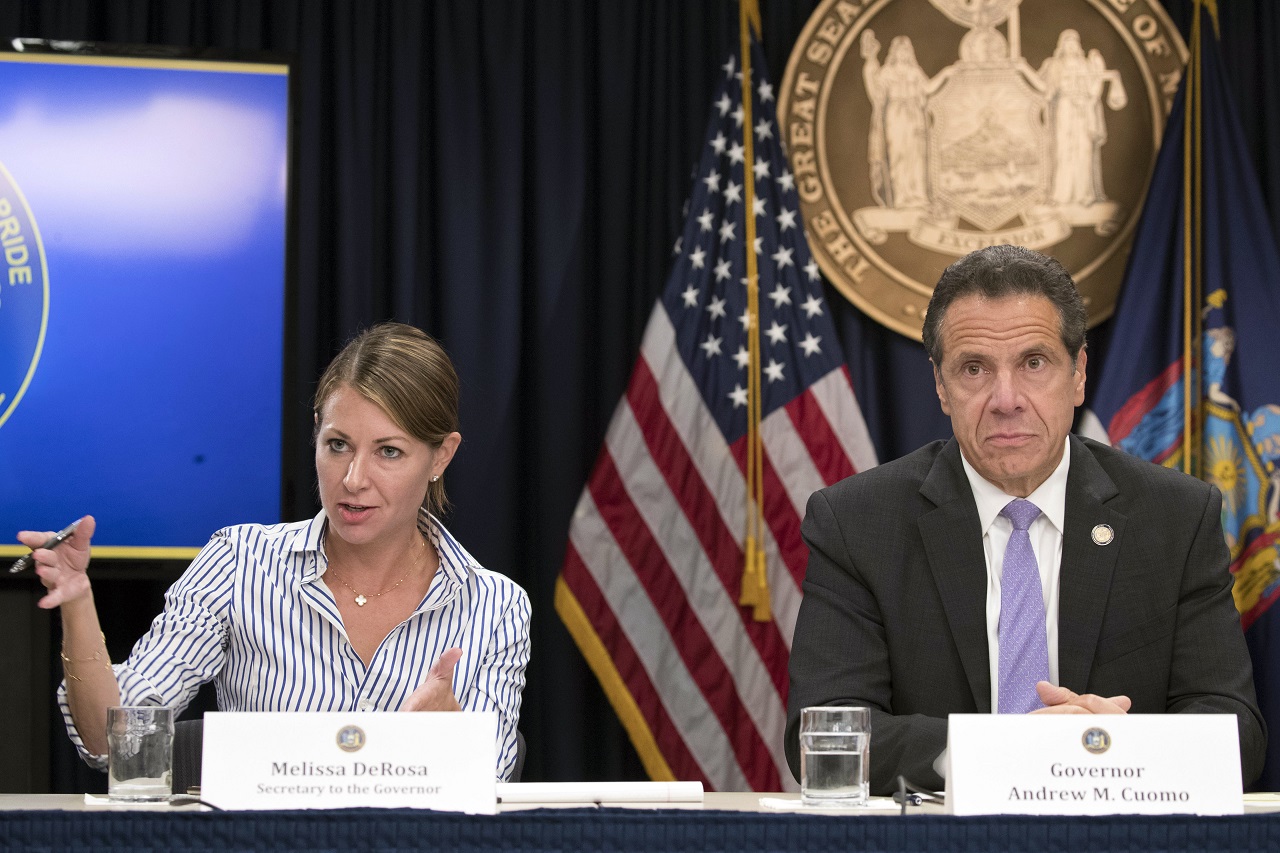 In the days after New York Gov. Andrew Cuomo was first accused of sexual harassment by a former aide, the governor's office called at least six former employees either to find out if they had heard from the accuser or to glean information about her in conversations that some said they saw as attempts to intimidate them.

Some of the people who received the calls said they hadn't heard from the administration in months before getting the call about the accuser. One said a caller encouraged them to give reporters any information discrediting the accuser, Lindsey Boylan, who worked as an economic adviser for the Cuomo administration between 2015 and 2018.

"I felt intimidated, and I felt bewildered," said Ana Liss, a former aide to the governor who received one of the calls.

In this Sept. 14, 2018 file photo, Secretary to the Governor Melissa DeRosa, is joined by New York Gov. Andrew Cuomo as she speaks to reporters during a news conference, in New York. (AP Photo/Mary Altaffer, File)

Ms. Liss, who earlier this month accused Mr. Cuomo of inappropriate behavior, said that Rich Azzopardi, a senior adviser to Mr. Cuomo, phoned her on Dec. 21. The call came eight days after Ms. Boylan said in a post on Twitter that the governor sexually harassed her.

Ms. Liss hadn't worked for the governor in more than five years and couldn't remember the last time the administration had been in touch, she said.

She said Mr. Azzopardi reminded her on the call of how much she had accomplished during her time working for the governor and asked her if she had received a message from Ms. Boylan. She told him she hadn't and said the conversation ended on a friendly note.

Mr. Azzopardi said the calls weren't coordinated by Ms. DeRosa. "There was no directed effort -- this outreach happened organically when everyone's phone started to blow up." He added that they didn't intimidate anyone.

In Twitter posts after this story was published, Ms. Boylan said she didn't reach out to anyone in December and didn't have a lawyer at the time.

Three former employees from his time as governor and one current aide to Mr. Cuomo have accused the governor of inappropriate behavior or sexual harassment in the workplace, prompting calls from Republicans and high-ranking state Democrats for him to resign.

Democrats who dominate the state Assembly have launched an impeachment investigation that will look at the allegations as well as how the Cuomo administration handled Covid-19 in nursing homes. State Attorney General Letitia James is now overseeing an investigation into the accusations made by the former aides and how Mr. Cuomo's office handled the complaints.

Mr. Cuomo has denied touching anyone inappropriately and has apologized for any behavior that might have been misinterpreted. He has also called for New Yorkers to withhold judgment until Ms. James's investigation is complete.

Ms. Boylan has said Mr. Cuomo tried to kiss her on the lips in his office and, during a 2017 flight on his plane, suggested they play strip poker.

A spokeswoman for Mr. Cuomo has denied Ms. Boylan's allegations.

Another former aide, Charlotte Bennett, said Mr. Cuomo asked about her sex life and whether she had relationships with older men. Ms. Liss has said he asked her if she had a boyfriend, touched her on her lower back at a reception and once kissed her hand when she rose from her desk. A fourth woman this week accused the governor of touching her inappropriately during an encounter at the Executive Mansion last year.

In a statement on Wednesday, Mr. Cuomo said: "As I said yesterday, I have never done anything like this. The details of this report are gut-wrenching. I am not going to speak to the specifics of this or any other allegation given the ongoing review, but I am confident in the result of the Attorney General's report."

The governor, in previous statements, has encouraged women to come forward and said his office would cooperate with Ms. James's inquiry.

But Mr. Cuomo and his aides have gone after accusers and rivals in the past, according to court documents and former staffers.

In October 2000, Mr. Cuomo, when he was the secretary of the Department of Housing and Urban Development, was accused of sex discrimination and harassment in an internal memo filed by Susan Gaffney, a former HUD inspector general. She accused Mr. Cuomo and other HUD officials of intimidation and harassment after she launched a congressionally requested audit into some of the work Mr. Cuomo had overseen.

Ms. Gaffney testified to Congress in 1998 that Mr. Cuomo's aides attempted to smear her, including publicizing an anonymous letter that Mr. Cuomo had allegedly received saying she was targeting minorities.

At one point, Mr. Cuomo assured her that he had nothing to do with the actions by key aides, she said. "I suggested that, if his key aides were acting without his approval, he should fire them; the Secretary did not respond," she said in the 1998 testimony, adding that tactics used by Mr. Cuomo and his aides were "dirty tricks" to force her to resign.

After Ms. Boylan tweeted her account in December, she said in a Feb. 24 Medium post that media outlets received "parts of a supposed confidential personnel file" from her time with the administration. Ms. Boylan said in the post that she had never seen the file and that it was an effort to smear her.

In response to Ms. Boylan's claim about her personnel record, Beth Garvey, the acting counsel to the governor, said: "With certain limited exceptions, as a general matter, it is within a government entity's discretion to share redacted employment records, including in instances when members of the media ask for such public information and when it is for the purpose of correcting inaccurate or misleading statements."

Ms. Boylan also said in the Medium post that "the Governor's loyalists called around town, asking about me."

One recipient of a call said the caller asked in December if Ms. Boylan had been in touch with the recipient, and what the recipient thought of her claims.

Another recipient of a call said that a caller, a current official in the Cuomo administration, asked if reporters had been contacted about Ms. Boylan and wanted to confirm the nature of the recipient's experience with Ms. Boylan. "The subtext was clear: I was being asked to dish dirt on her," the recipient said.