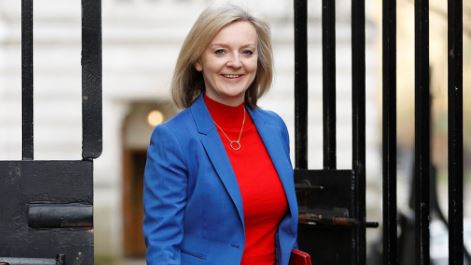 Truss made the pledge in an op-ed for the Telegraph published Sunday. Her piece comes after the U.S. said last week it would maintain 15% tariffs on Airbus aircraft and 25% tariffs on other goods from the European Union.

Britain's Secretary of State of International Trade and Minister for Women and Equalities Liz Truss is seen outside Downing Street in London.  (Reuters)

“I will fight to consign these unfair tariffs to the bin of history,” Truss wrote, while slamming Brussels for supposedly failing to protect British and Scottish interests.

“U.S. tariffs on Scotch whisky are unacceptable and unfair. I cannot be clearer about that,” Truss wrote. “Whisky-making is one of our great industries and a jewel in our national crown.”

Britain had previously demanded that the U.S. drop its tariffs on Scotch whisky. Truss said she will bring up the matter with her U.S. counterpart, Robert Lighthizer, when they meet in the coming weeks to discuss tariffs and other issues.

“I firmly believe free and fair trade remains the best way forward for the world and for Britain,” Truss said.

The U.K., meanwhile, is currently in a transition period whereby it remains part of the EU's tariff-free arrangements until the end of the year. The future economic relationship has yet to be agreed upon, meaning tariffs could be imposed on traded goods between the two sides come the start of next year — a development that most economists think would further hobble an economy struggling to recover from the coronavirus pandemic.