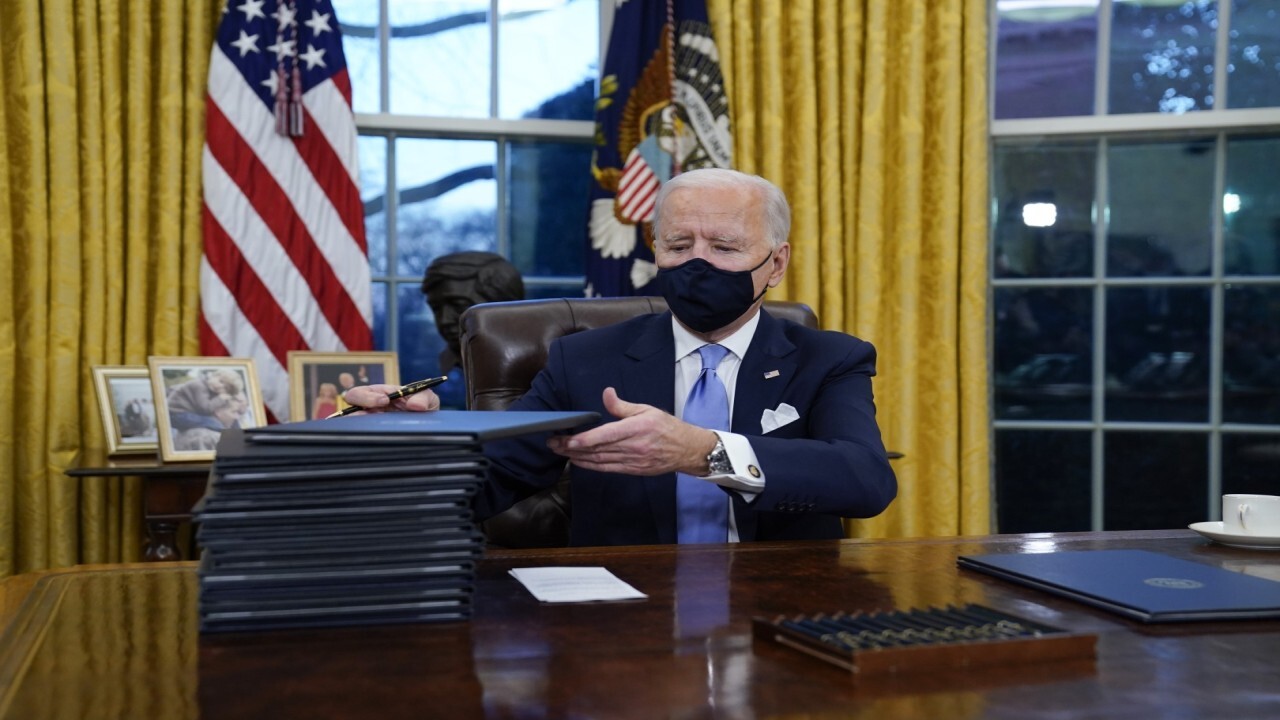 President Biden is set to take “aggressive action” Wednesday to tackle climate change and is expected to take a number of executive actions focused on jobs, “equitable” clean energy and “restoring” scientific integrity across the federal government.

The order will expand on his move last week to rejoin the Paris climate agreement. His review of “harmful rollbacks of standards” that protect air, water and communities is set to direct federal agencies to “eliminate fossil fuel subsidies as consistent with applicable law and identify new opportunities to spur innovation, commercialization, and deployment of clean energy technologies and infrastructure.”

On the campaign trail, Biden called for the U.S. to phase out its dependence on fossil fuels.

Biden’s order on Wednesday is set to "empower" American workers and businesses to “lead a clean energy revolution” that would achieve a carbon pollution-free sector by 2035, while putting the U.S. on an “irreversible path to a net-zero economy by 2050.”

The order, according to the White House, clearly establishes climate considerations as an “essential element” of U.S. foreign policy and national security.

The order affirms that the U.S. “will exercise its leadership to promote a significant increase in global ambition,” while making clear that “both significant short-term global emission reductions and net-zero global emissions by mid-century—or before—are required to avoid setting the world on a dangerous, potentially catastrophic, climate trajectory.”

The order will also commit Biden to hosting a Leaders’ Climate Summit on Earth Day, April 22, 2021; the U.S. to reconvene the Major Economies Forum; and to underscore the administration’s commitment to elevating climate in U.S. foreign policy.

Biden, last year, announced that former Obama Secretary of State John Kerry would serve as special presidential envoy for climate and will sit on the National Security Council — the first time that the NSC will include an official dedicated to climate change.

Meanwhile, the order also directs Director of National Intelligence Avril Haines to prepare a National Intelligence Estimate on the security implications of climate change, the State Department to prepare a transmittal package to the Senate for the Kigali Amendment to the Montreal protocol, and all agencies to develop strategies for integrating climate considerations into their international work.

The order also formally establishes the White House Office of Domestic Climate Policy, creating a central office in the White House that is charged with coordinating and implementing Biden’s domestic climate agenda.

As for jobs, the order, according to the White House, is “consistent with the goals of the President’s Build Back Better jobs and economic recovery plan,” saying that clean energy jobs is a “central pillar.” The orders direct federal agencies to procure carbon pollution-free electricity, and clean, zero-emission vehicles to create good-paying union jobs and “stimulate clean energy industries.”

The order also “requires those purchases to be Made in America,” while “strictly” enforcing wage and benefits guidelines.

“These actions reaffirm that agencies should work to ensure that any jobs created with funds to address the climate crisis are good jobs with a choice to join a union,” the White House said.

The order also “catalyzes” the creation of jobs in construction, manufacturing, engineering and the skilled-trades by directing steps to ensure that every federal infrastructure investment reduces climate pollution and that steps are taken to accelerate clean energy and transmission projects under federal siting and permitting processes in an environmentally sustainable manner.

With regard to agriculture, the order directs the secretary of agriculture to to “collect input from farmers, ranchers, and other stakeholders” on how to use federal programs to “encourage adoption of climate- smart agricultural practices that produce verifiable carbon reductions and sequestrations and create new sources of income and jobs for rural Americans.”

Biden’s order also directs the secretary of the interior to pause on entering into new oil and natural gas leases on public lands or offshore waters to the extent possible, launch a rigorous review of all existing leasing and permitting practices related to fossil fuel development on public lands and waters, and identify steps that can be taken to double renewable energy production from offshore wind by 2030.

The White House says the order “formalizes” Biden’s “commitment” to making environmental justice part of the mission of each federal agency, by directing them to develop programs, policies and activities to address the disproportionate health, environmental, economic, and climate impacts on disadvantaged communities.

The order creates a government-wide “Justice40 Initiative” with the goal of delivering “40 percent of the overall benefits of relevant federal investments to disadvantaged communities.” Meanwhile, Biden is also set to sign a presidential memorandum on Wednesday focused on scientific integrity, in an effort to “send a clear message” that his administration “will protect scientists from political interference” so that they can “think, research, and speak freely to provide valuable information and insights to the American people.”

Biden, on Wednesday, will also sign an executive order to re-establish the President’s Council of Advisors on Science and Technology.