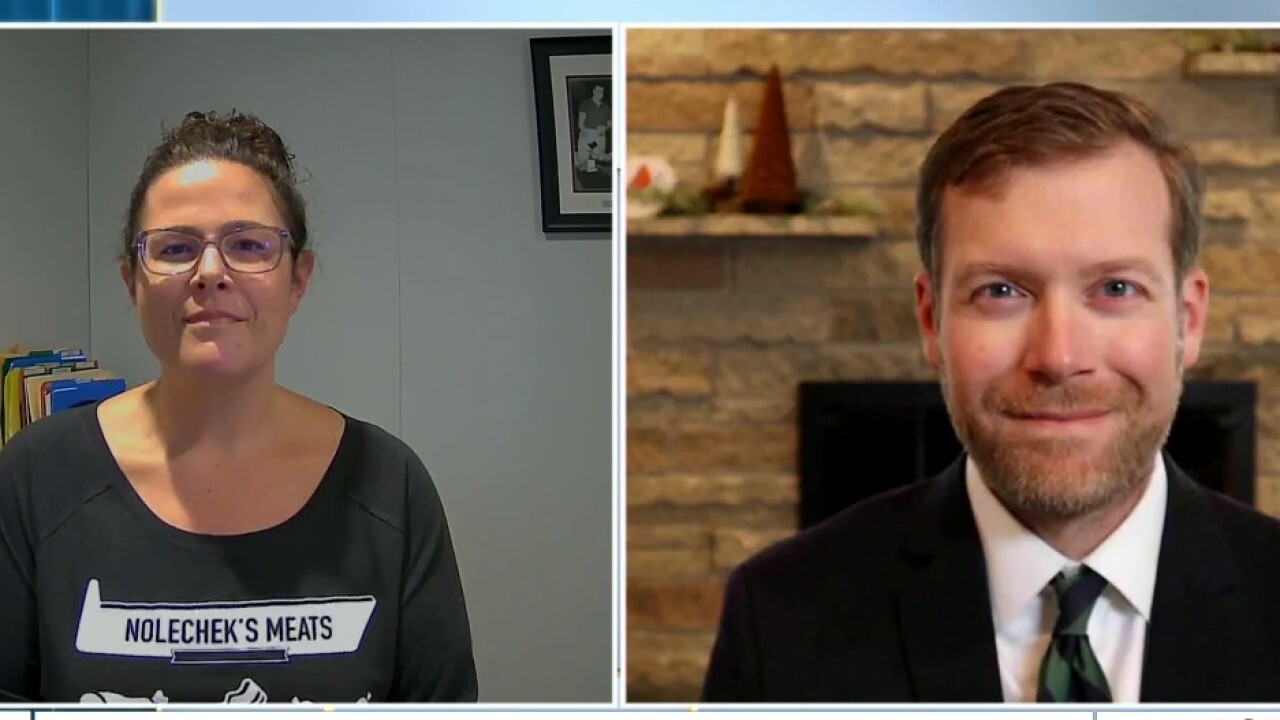 Lindsey Fox, Nolechek's Meats co-owner, and her attorney Daniel Suhr are suing the Biden administration over the USDA's mask mandate requirement, arguing that the government is 'overreaching' with 'yet another illegal mandate.'

President Joe Biden on Monday unveiled his administration's plans aimed at bringing down surging meat prices, with a major focus on stepping up regulations on meat packers and offering up more federal dollars in an effort to increase competition in the market.

President Joe Biden listens during a virtual meeting about reducing the costs of meat through increased competition in the meat processing industry in the South Court Auditorium at the Eisenhower Executive Office Building on January 3, 2022 in Washin (Photo by Sarah Silbiger/Getty Images / Getty Images)

The White House vowed to issue "new, stronger rules under the Packers and Stockyards Act" targeted at major beef, pork and poultry packing firms along with a dual initiative between the DOJ and USDA to launch a portal for "reporting concerns about potential violations of the competitions laws," arguing that the spike in prices was due to the companies paying less to producers and charging more to grocers.

The administration also dedicated $1 billion of American Rescue Plan funds in the way of grants, loans, and worker training to help small meat processors on top of the $500 million the USDA made available in July for "expanded meat and poultry processing capacity as part of efforts to increase competition."

The president has faced heat from Republicans and in the polls over soaring prices across several industries, and the administration has pointed the finger at companies in other arenas such as oil and gas with accusations of price gouging – dismissing critics' claims that government spending has contributed to inflation across the board.

Congress spent trillions in 2020 to provide aid after lockdowns and job losses brought on by COVID-19 under President Trump, and authorized spending billions more after Biden took office. Now, the Biden administration is pushing to spending further trillions for social programs paid for in part through further tax collection by bolstering the IRS.

But the Biden administration placing the blame of rising meat prices on large packers is getting some pushback, particularly from a group that represents such entities of all sizes.

The White House said in a fact sheet that "four large meat-packing companies control 85 percent of the beef market," and the president pointed to them – without naming names – when discussing rising prices with independent farmers during a remote meeting on Monday.

Sarah Little, spokesperson for the North American Beef Institute told FOX Business in a statement that this is nothing new, saying, "There have been 4 firms operating in the fed cattle market for nearly 30 years."

"Why inflation now?" Little asked rhetorically. "Labor remains the biggest challenge. Our members of all sizes cannot operate at capacity because they cannot employ a long-term stable workforce. New capacity and expanded capacity created by the government will have the same problem."

Little argued, "All of the aid announced will do little to help producers or packer processors now."