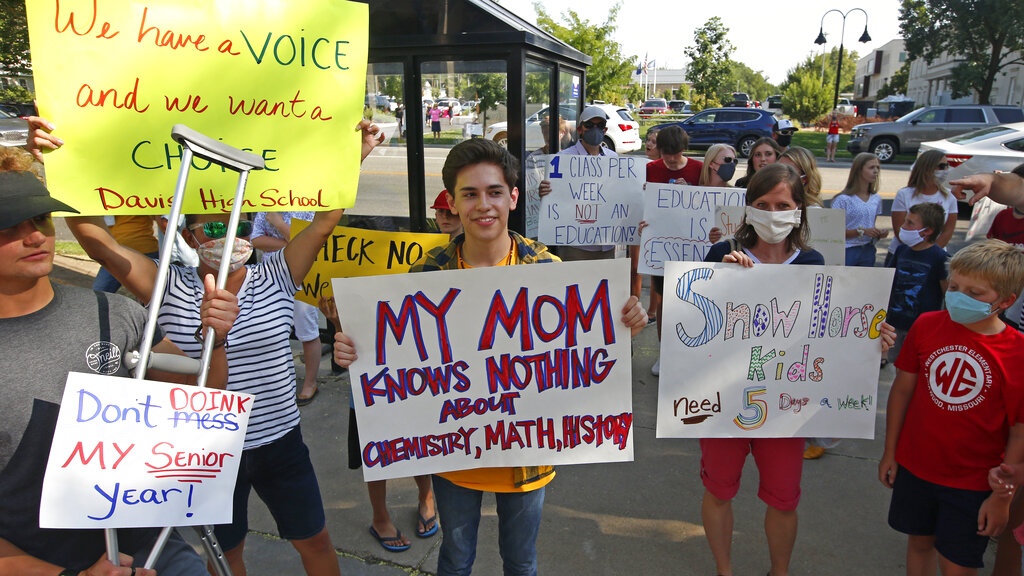 Working parents going on six months without school or camp are about to take another hit: rising child-care costs.

Parents with school-age children are hiring sitters or paying for online classes they wouldn't need if their children were in school. Some are lining up tutors or switching to private schools that plan to open for in-person learning. Parents with younger children are bracing for potentially higher charges at their day cares, which are straining to pay for protective gear and additional cleaning.

Child care and its costs might seem incidental in a global pandemic, but they are integral to the economy. For individual families, higher child-care expenses can range from troublesome to financially debilitating. Rising costs divert money from other purchases or investments, and many working parents said child-care costs prevent them from saving for a home. Yet without child care, parents are less productive at work -- not to mention more stressed and tired.

"Here's the deal," said Misty Heggeness, an economist who wrote about the pandemic's effect on working mothers for the Federal Reserve Bank of Minneapolis. "If you care about U.S. economic growth...this should be one of the first areas of concern for you."

John Ross and his son David talk about their concerns for school reopening in the fall. The father of three said of his children struggled to do their work this spring over a spotty cellphone connection. (AP Photo/Bryan Woolston)

When schools closed in the spring, parents started to piece together ad hoc care, finishing work late at night or setting their children in front of the TV throughout the day. Many parents who work front-line jobs, from bank tellers to doctors, don't have even that option. Some parents have dropped out of the workforce altogether.

Donna Medrek tutored her son through the end of kindergarten, often rising at 4 a.m. so she could squeeze in some work for her employer, legal consulting firm BlueStar Case Solutions. She can't imagine keeping that same schedule again in the fall, especially now that she is in the office a couple of days a week.

Chicago recently announced that schools will open online only, so Ms. Medrek and her partner, Chris Mullaney, plan to send their 6-year-old to a program at a local gym part time. The cost is steep -- about $100 for six hours of care.

They know many parents couldn't afford that. When their son FaceTimed with other kindergartners in the spring, Ms. Medrek would catch glimpses of their moms and dads. "They were panicking," Ms. Medrek said. "You can tell they're thinking, 'I can't FaceTime, I've got to keep my job.'"

Even under normal circumstances, paying for child care can be a struggle. Day care for a single child can easily cost $10,000 a year -- about the average price of tuition and fees for a year at a public, in-state university -- and more in big cities. The cost of child care and nursery school has risen at roughly twice the pace of inflation since 2000, according to the federal Consumer Price Index.

As the pandemic drags on, more parents are in the market for child-care services. School-age children now need sitters during the day. Many day cares have closed. Grandparents can't fly in.

Taylor Lopez protests with others in front of the Davis School District Office Aug. 4 Ii Farmington, Utah. Parents protested the hybrid reopening plan because they would prefer their children to attend school five days a week. (AP Photo/Rick Bowmer)

CORONAVIRUS COULD PUSH US BANKRUPTCIES TO WORST LEVELS IN 10 YEARS

Kara Fastuca, a special-education teacher in New York City, was expecting her daughter to attend free prekindergarten in September. But she feels the hybrid learning model the city is offering, with children likely in school one or two days most weeks, is inadequate. So she plans to send her daughter -- and her infant son -- to a babysitter.

That will nearly double the child-care costs she was expecting to pay this fall. A single mother, Ms. Fastuca will be covering the bills on her public-school salary. She saved as much money as she could over the spring and summer to prepare. "It's still going to be tight," she said. "But I have to do what I have to do."

There isn't definitive data yet on how much parents are paying for child care in the pandemic. But many companies and policy makers have been slow to grasp that child care is in crisis, economists say. Remote work has been a success for American corporations, even if remote learning has been a slow-motion disaster for many children and parents.

Melissa and Jonathon Williams continue to pay for part-time day care for their 2-year-old daughter, even though Mr. Williams was recently laid off from his job at a chamber of commerce in Southern California. Ms. Williams, a financial-aid administrator at a university, is back in the office.

They feel stuck. Coming up with $725 a month is difficult, but it is relatively cheap for their area, and they will lose their daughter's spot if they pull her out.

Ms. Williams also has custody of her 8-year-old niece, who currently spends the day with Ms. Williams's mother. They aren't sure what they will do in the fall, when her school is expected to open online only.

Those measures could also help child-care providers that faced lean months earlier in the pandemic, when many either shut down or saw enrollment plunge.

Senate Republicans have proposed $15 billion to stabilize the child-care industry as part of the next coronavirus relief package. House Democrats, with some Republican support, recently passed two child-care bills. One proposes $50 billion in funding; the other includes tax subsidies for working families and other measures. Neither appears close to becoming law.

In a June survey from the National Association for the Education of Young Children, some 40% of child-care providers said they expected to close permanently if they don't get additional public assistance.

Those that stay open could be forced to raise prices.

Funtime Preschool and Afterschool in Clinton, Miss., has new coronavirus protocols. Children are met at the entrance by one set of employees, who are suited in protective equipment, then deposited with their classroom teachers. The additional labor and equipment adds up to about $1,000 a week, or $5 per child. That isn't a trivial amount to parents she serves, said Lesia Daniel Hollingshead, who owns the business with her brother.

Ms. Hollingshead and her brother plan to absorb the expenses for 2020. She isn't sure if they can afford to do that next year.