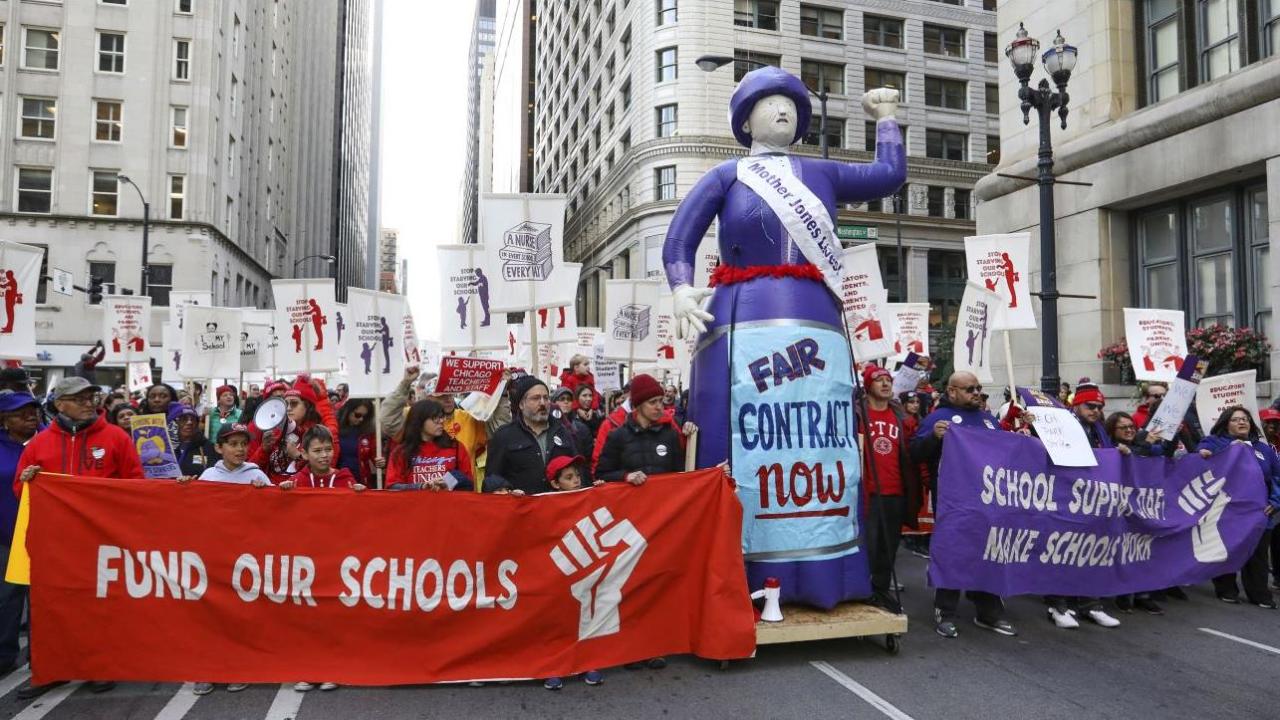 Parents in Chicago scrambling to find childcare amid teachers strike

Thousands of students are out of school as Chicago teachers go on strike. FOX Business' Lauren Simonetti with more.

CHICAGO (AP) — Chicago's mayor on Tuesday accused leaders of the city's powerful teachers union of using "political" issues to hold up a contract agreement to end a strike that has blocked students from classrooms for nine days.

Mayor Lori Lightfoot said the Chicago Teachers Union's bargaining team demanded "at the eleventh hour" that she support state legislation to elect rather than appoint the district's school board, as well as changes to state law governing what the union can strike over.

"Are we really keeping our kids out of class unless I agree to support the CTU's full political agenda wholesale?" Lightfoot said at a news conference. "If the CTU wants a deal, there's a deal to be had right now on the table."

The heated accusations follow several days of contentious closed-door talks seeking to settle the strike, which has kept more than 300,000 students out of classrooms since Oct. 17 in the nation's third-largest school district.

A spokeswoman for the union didn't immediately return a message seeking leaders' reaction to Lightfoot's comments. A message posted on the union's Twitter account said it was "just asking that the mayor stop contradicting herself and the platform she campaigned on."

EXPERTS TO CHICAGO TEACHERS UNION: CHANGING UP PENSIONS COULD FEEL LIKE A RAISE

Lightfoot, a former federal prosecutor, was elected on promises to invest in poor neighborhoods, address Chicago's troubled finances and improve schools. As a candidate, she said she supported moving to an elected Board of Education rather than the mayor-appointed model that gives the city's top elected official enormous control over the school district.

She said Tuesday that the legislation that union leaders back is "fundamentally flawed" but didn't provide details.

Both sides have said in recent days that they made progress on the teachers' top priorities, including stricter limits on class sizes and additional staffing. Talks resumed Tuesday, hours after a 16-hour bargaining session wrapped up without a tentative agreement.

HOW CHICAGO'S TEACHER STRIKE IS AFFECTING KIDS WITH SPECIAL NEEDS

A representative for the teachers union suggested after the late-night session ended early Tuesday that Lightfoot could settle the dispute by committing to more resources for schools.

General Counsel Robert Bloch said the union representing 25,000 teachers is awaiting the city's response. He says the parties have narrowed their differences, "but we're not there yet."

But Lightfoot and the district's CEO, Janice Jackson, said Tuesday that union leaders are to blame for the impasse.

Adding preparation time has been among teachers' demands since negotiations toward a new contract began months ago. But as they prepared to strike and set up picket lines, union officials and teachers more often spoke about reducing the size of classes and adding staff, including librarians, social workers and nurses.

Under the 2012 deal that ended the last major teachers' strike in the city, teachers surrendered some paid preparation time.

They now want 30 minutes restored for elementary school teachers, who were guaranteed at least 15 minutes at the beginning of the school day under the contract that expired this summer. The union argues that teachers need that time to prepare lessons and says it's unfair to expect educators to do that work unpaid outside of school hours.

"One of the great things about collective bargaining is that it gives the parties a chance to really figure out what's working and what isn't working," said Robert Bruno, a professor of labor and employment at the University of Illinois Chicago. "So, they agree to a contract, live with it for a while and then say this isn't working the way we thought it would, or here are the unintended consequences."

In a 2017 analysis of teachers' labor contracts, the National Council on Teacher Quality found teachers in large school districts typically get 45 minutes per day to plan.

Some of the contracts also specify the amount of time teachers have to collaborate with colleagues.

The district has reached a tentative agreement with a separate union representing thousands of school support staff who went on strike alongside the teachers union. Leaders of that union have said staff won't return to work until teachers get a deal too.