With 2020 just around the corner and an election cycle taking center stage, candidates are looking for a hook to bolster their image as a champion of the people best positioned to close the gap on “income inequality.” Almost overnight, a once arcane Wall Street term stock buyback has made its way into the mainstream news cycle.

Promising to end or at least regulate the practice, several Democratic candidates along with Senate Minority Leader Chuck Schumer seem ready to take on the titans of industry and Wall Street. Sen. Schumer and presidential hopeful Bernie Sanders co-authored an op-ed entitled Limit Corporate Stock Buybacks for the New York Times. To get around a Sanders-Schumer ban, companies would have to live up to some artificial standard of fairness on wages, pensions and likely a growing list of demands, effectively limiting management options to generate shareholder returns. Maybe well-meaning but misses the big picture and the real danger from excessive stock buybacks.

On the other side of the aisle Republican Sen. Marco Rubio, R-Fla., believes the best solution is to change the tax code leveling the playing field between capital gains and dividends.

Politics aside, the billions spent on corporate buybacks are all too often the easy way out for CEOs.

STOCK BUYBACKS, THE ECONOMY AND YOUR RETIREMENT: SETTING THE RECORD STRAIGHT
SCHUMER, SANDERS SEEK TO REIN IN CORPORATE SHARE BUYBACKS

To put it simply, a stock buyback is a public corporation going into the open market to buy shares of their own stock from existing shareholders. The net effect is a reduction in the overall shares outstanding which in turn increases earnings per share as net income is divided by a lower share count. What could be wrong with that? Higher earnings mean higher stock prices along with added support when shares are falling. Everyone is happy.   If stock buybacks are so Star Spangled awesome how come executives that cash out of their own stock, do so more often after their firms announce stock buybacks? SEC Commissioner Robert Jackson wrote just that in a letter to Senator Chris Van Hollen, D-Md., who called the findings "very significant and very troubling."   The performance is mixed for companies that buyback stock vs. those who choose more productive avenues of capital deployment. Few succeed while most are attempting to hide or cover up the inability of management to drive the top line. Remember, a stock buyback does nothing for revenue and nothing for income. Just earnings per share are boosted due to a lower share count.

In previous articles I used to give companies like Apple (AAPL) a pass thinking with well over $200 billion in cash, a stock buyback was all but necessary. I'm done.

Where's my iPhone that doesn't freeze up when I take a picture or even an iPhone that is significantly different than the one I bought a couple of years ago? Surely, with an army of the best engineers on the planet we could push the envelope further. Last year, corporations spent over $1 trillion on stock repurchases setting a record, adding to the trillions spent in previous years. My god think about it! Where's my teleportation device? Maybe we could have cured cancer? Surely, we could have done something more productive than just wasting it on another mindless stock buyback program. 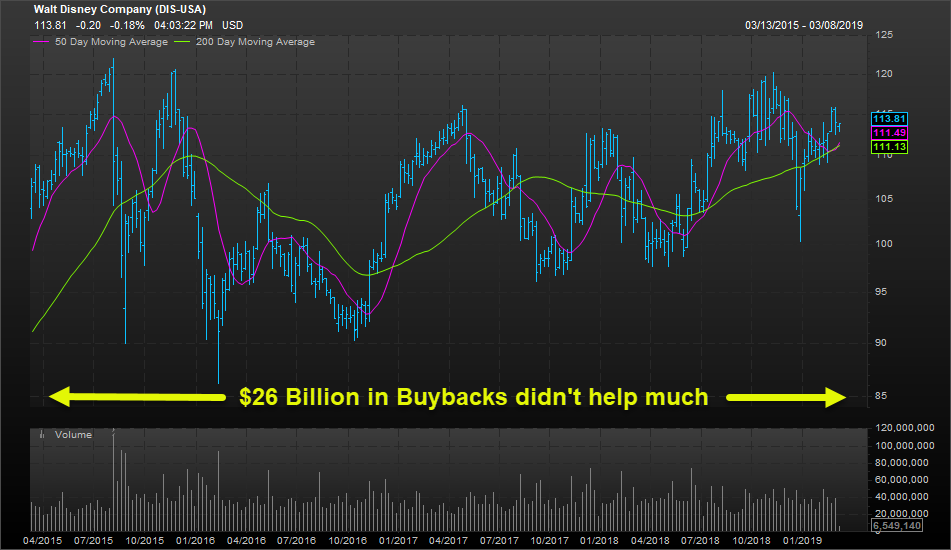 When you read between the lines of a stock buyback press release, basically the CEO is telling you he or she is out of ideas. Since 2015 when we first learned Disney was starting to see problems at their ESPN unit, the company continued to buyback over $26 billion worth of their own stock. One look at a price chart gives the verdict on just how much shareholder value has been added. It's no secret today that the company is spending billions to launch a successful OTT, or over-the-top service. Arguably Netflix (NFLX) is the industry leader and today commands a fully diluted market cap of $157 billion. According to FactSet data, when the stock was just $82 at the beginning of 2015 its equity valuation was just over $20 billion. Throw in a 30 percent takeout premium and $26 billion for the next leg of growth seems like a better use of capital. 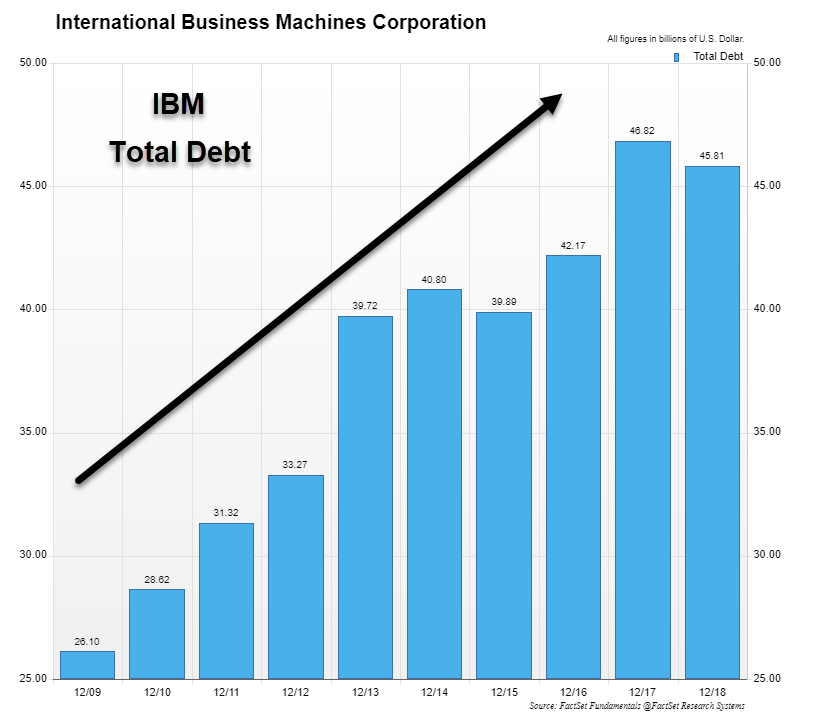 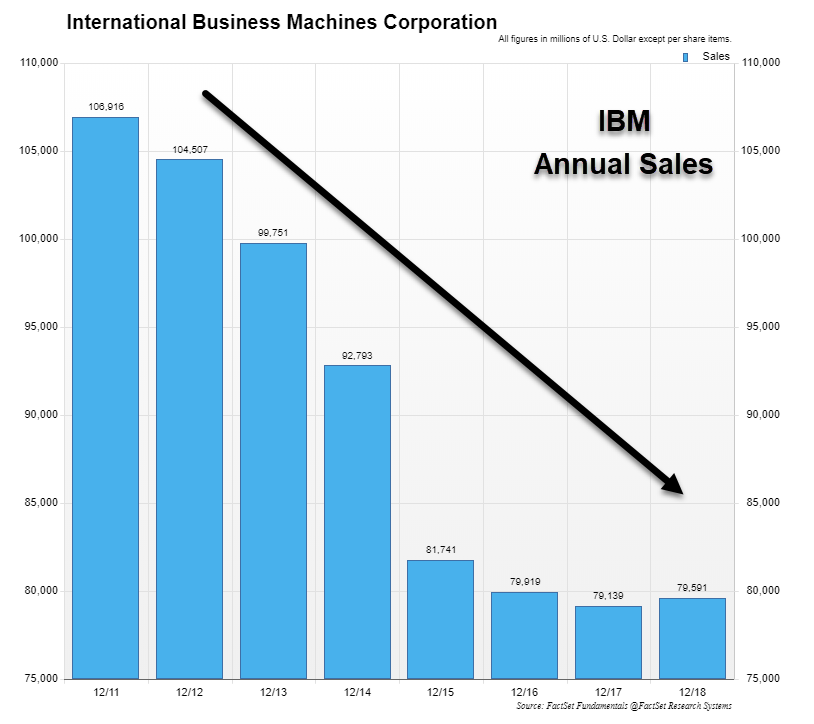 How about the poster child of stock buybacks, IBM, as it proceeded to buy back on average $9 billion of their stock per year while revenue continued to go lower. From the years 2011 through last year IBM bought over $71 billion in shares* while revenue declined from a peak of $106 billion falling to just $79.6 billion during the same time frame. In other words, they were borrowing to buy back their own shares mostly at higher prices. By 2013 the company's failure to recognize the changing landscape in technology caught up with them and the stock has been on a slow ride south from 210 in 2013 now 35 percent lower to Friday's price just over $135.

To their credit, CEO Ginni Rometty has slowed down share purchases significantly, buying back only $4.4 billion last year. 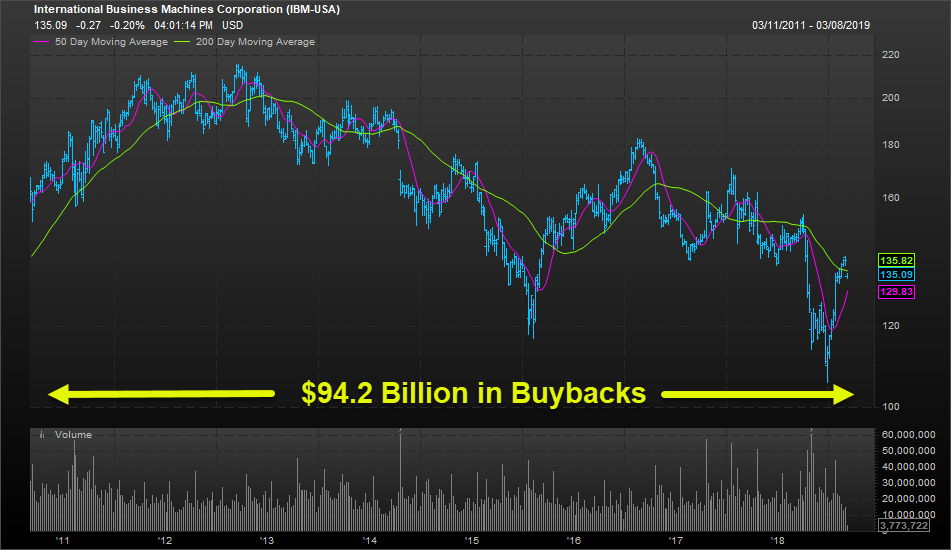 IBM and Disney aren't alone. In fact, they are just the tip of the iceberg. All of this begs the question why CEOs and management often choose stock buybacks instead of other more productive uses of corporate cash? Why not increase R&D or build another factory or for that matter buy another company? Like I said earlier, there’s no easy answer but a little history is in order to understand the mindset of management.

Stock options and restricted stock make up an increasing portion of CEO compensation. Last year Walt Disney Chairman and CEO Bob Iger received a total package of $65.6 million of which more than $35 million was equity compensation. When stock vests or options are exercised the share count can balloon especially if it is being done for senior and middle management. Suddenly, the earnings per share or EPS is threatened because the number of shares outstanding are rising. What’s the solution? You guessed it, a stock buyback program.    How did CEO pay get so high and why not just pay a higher salary rather than continue to dilute shares?   While the causes are complex, all the evidence seems to point to former President Bill Clinton and the IRS as the principal catalyst driving up CEO compensation dramatically since 1994.

Early in his presidency, Bill Clinton decided CEOs were making too much money and concluded government should play a role in leveling the playing field. His solution was using IRS tax code 162 (m), which limited the deduction of CEO pay as an expense to $1 million. On its own, it might have forced boards to reconsider high compensation as the lack of a write-off would start to cut into profits and eventually share prices. However, the code permits expensing of “performance" based pay above the stated $1 million if certain goals are met.

Clinton’s law soon became an inside joke in boardrooms across America. Performance-based compensation much of which came in the form of stock options and restricted stock exploded in the 90s during the run up into and bursting of the internet bubble. The recession that followed along with the financial crisis weighed on compensation, but the last 10 years has seen a return to trend with C-suite pay rising far faster than the rest of the workforce.

So, here we are nearly 25 years later with a stock-based compensation and stock buyback explosion that doesn’t seem ready to end anytime soon. Stocks are up a staggering 400 percent since the lows of the financial crisis so it’s not like shareholders have been complaining. However, the opportunity cost not just for companies but for our country is becoming painfully apparent. Corporate America is mortgaging our future in a classic case of short-term thinking.

There will be critics of this article, some from arguably brilliant corporate leaders, many of whom I respect and admire. Jamie Dimon CEO of JPMorgan Chase has said buybacks are for times when stock is cheap. I think the above examples show that despite buybacks, stocks can and do get a lot cheaper. While it's true that cash returned to shareholders in the form of stock buybacks can be redeployed into other companies, we're paying these titans of industry massive sums of money to do just that. If you can't find something to do with $200 billion in a savings account, maybe it's time to find another CEO.  *FactSet data

*The original version of this article previously published has been edited for length and clarity.