How hot is the job market? Hot enough that would-be employees are standing up interviewers and not showing up for their first day of work. Not only that, but there has been an uptick of employees walking out of work and never coming back --without giving any notice.

This type of behavior clearly exhibits confidence in the economy with workers certain that they will quickly find a new job.  In the case of job applicants not showing up for interviews or for their first day of work – it could be that they have a better opportunity elsewhere.

The trend, however, is a headache for employers who are desperate to find able bodies during this worker shortage. If finding talent wasn’t hard enough, retaining talent is also becoming an issue. According to data from the Labor Department, 3.4 million Americans quit their jobs in April, the latest month for which data is available, near a 2001 peak. 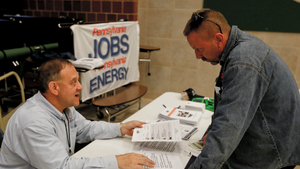 US job growth was likely solid in June despite trade risks

Employers in the United States are thought to have kept up their brisk pace of hiring in June, reflecting the durability of the second-longest U.S. economic expansion on record even in the face of a trade war with China.

The slow pace of wage growth, despite a red hot job market, and the trend of sluggish productivity has perplexed even the Federal Reserve, but the trend of job hopping could actually boost both measures. According to the Federal  Reserve Bank of Atlanta, job switchers saw a roughly 30% larger annual pay increase over the past 12 months versus those workers who stayed put.

While employers have been trying to get new employees in the door, now the focus should shift to keeping the workers they have happy. Sandy Cockrell, the global leader of the CFO Program for Deloitte, told FOX Business that employers have been focused on attracting talent, looking forward retaining talent will be the focus.