Recession worries gripped Wall Street and the world Wednesday as the U.S. Stock market tumbled to its worst day of the year – with the Dow dropping 800 points – and conjuring up for some visions of the Great Recession.

Liz Claman, the anchor of the “The Claman Countdown” on the Fox Business Network knew trouble was brewing early. “I woke up at 5 am to take a Peloton spin class and glanced at my phone and saw that Germany’s GDP had contracted in the second quarter,” Claman told FoxBusiness.com hours after the market carnage.

An inverted yield curve in the bond markets sent the day downward fast as this is widely seen as an indicator of an oncoming economic downturn usually within 22 months.  Wednesday, for the first time since the Great Recession, the yields — or returns — on short-term U.S. bonds eclipsed those of long-term bonds.

Normally, the government needs to pay out higher rates to attract investors for its long-term bonds. 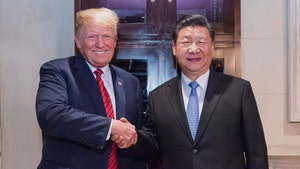 The president tweeted he believed a personal meeting may help China’s crisis over protests in Hong Kong, and resolve the ongoing trade war.

All through the day as red arrows lit up the TV screen signaling a spiraling downward market, Charles Payne, anchor of FBN’s “Making Money” knew the decline would be bad, but said after the close, “I didn't think 800 Dow points but I knew it would be triple digits.”

Janet Yellen to Wall Street: A recession is unlikely
Recession indicator with perfect track record flashing red
Here’s what to do with your 401(k) in the midst of the market drop

Through the day, guests appeared on FBN offering their take on when and how the market faltering could end. “I had great guests with a lot of different opinions on the cause of selling and when people should buy but nobody thinks the volatility is over,” added Payne.

On days like Wednesday, Claman said she knows that all bets are off.

“These past two weeks have been awfully difficult to assess but equally as fascinating. One day a huge drop, the next, a big bullish move, particularly in the final hour of trade."

Claman added the wild market swings have kept her and her production team on their toes, “our goal is to be on the news and when the markets shift under our feet, we’ve got to roll with it.”

August has traditionally been a quiet time for the stock market. FBN’s anchors believe you can forget about that holding true this year.  “Guests think this is just the beginning of a really ugly month,’” said Asman. Colleague Payne doesn’t disagree, “Bottom line: stay buckled up.”

Claman, who has been covering business news since 1998 offered her sage experience too.

“For years, summers were deadly. Trading volume dropped and it felt like no one was watching,” said Claman, “This summer? It feels like every single day is the Super Bowl. You’ve got to bring your A-game, your reflexes have to be at their most sensitive in order to catch every move in stocks, bonds, derivatives, commodities, futures, and it’s our job to ensure that viewers are right there with us on the field.