It’s the rumored end to an era of Swarovski-encrusted, lingerie-clad models walking the runway on network TV.

Shanina Shaik broke the news to The Daily Telegraph Tuesday, claiming the Victoria's Secret Fashion Show is off.

“It’s something I’m not used to,” the Victoria's Secret angel, 28, said. “Because every year around this time I’m training like an angel.”

Shaik said the brand is working on new ways to do the show.

L Brands, the parent company of Victoria’s Secret, did not respond to a FOX Business request for comment. 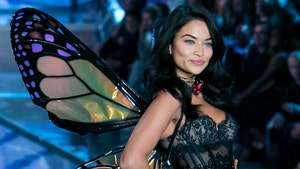 But take one look at the ratings in the past decade, and it’s not hard to see why executives are reconsidering where the show will live. Since 2009, the show's viewership has dipped below half of what they were previously achieving.

Even with powerhouse performances to accompany famous models down the catwalk, viewers haven't been tuning in for the annual event.

Indeed, it seems like not everyone wants to know what secret Victoria has up her sleeve.

Here’s a look at the last 10 years, and how many people tuned in to watch some of the world’s most beautiful models strut down the runway.

Victoria Secret Models on the Runway at the 2009 Victoria's Secret Fashion Show at The Armory on November 19, 2009 in New York City. (Photo by - NICK HUNT / PMC)

It was the final walk for supermodel Heidi Klum down the runway after her 1998 debut.

Styles described by the brand included “Star Trooper” and “Enchanted Forest,” and a live performance by the Black Eyed Peas.

Some of the other famed models on the stage included Alessandra Ambrosio and Miranda Kerr. At the time, Adriana Lima was out because she was pregnant with then-husband and NBA player Marko Jaric.

Back from maternity leave, Lima opened the show with Lily Donaldson and Ambrosio. Angels who took a time-out for their own pregnancies this year included Kerr and Doutzen Kroes.

This was a peak year for the show, taking the highest-rated spot for the network event in the last decade.

Rihanna, Bruno Mars and Justin Bieber couldn’t compete with the previous year’s viewership, as nearly a million fewer viewers tuned in to watch the lingerie show.

It was Shaik’s second show for the company, and Jourdan Dunn’s first.

This was the last year that L Brand’s signature runway show would get close to 2011’s success, perhaps thanks in part to a performance by Taylor Swift, who graced the runway with fellow performing artist Fall Out Boy.

Ming Xi and Joan Smalls were some of the newer faces joining regulars Lima and Abrosio.

“Gilded Angels” and “Fairy Tale” were two of the themes encompassing the featured garb with musical performances by Taylor Swift and Ed Sheeran.

It was the first year for current staples Taylor Hill and Stella Maxwell to walk.

Models pose on the runway during the 2015 Victoria's Secret Fashion Show at Lexington Armory on November 10, 2015 in New York City. (Photo by Kevin Mazur/WireImage)

In 2015, the show saw its biggest drop in ratings for the last decade.

Selena Gomez, The Weeknd and Ellie Goulding were drafted to croon as models strutted their stuff down the runway.

Reality show stars and social media giants Kendall Jenner and Gigi Hadid both debuted as angels. The pair of models kept up with the show through its last few seasons.

Jenner is considered the highest-paid supermodel, according to Forbes, raking in a cool $22.5 million in contracts and endorsements.

Models walks the runway 2016 Victoria's Secret Fashion Show at the Grand Palais in Paris on November 30, 2016. (Photo by Mehdi Taamallah/Nurphoto)

This was the last year the show saw an increase – albeit slight – in viewership.

Lady Gaga and Bruno Mars both took care of the musical performances.

Bella Hadid joined her sister Gigi for some sisterly fun on the runway.

Models on the catwalk for the Victoria's Secret Fashion Show at the Mercedes-Benz Arena in Shanghai, China (Photo by Aurore Marechal/PA Images via Getty Images)

The company pulled out all of the stops to feature the show from Shanghai.

Harry Styles was one of the main performances this year, alongside Miguel, and Leslie Odom Jr.

“Punk Angles” and “Goddesses” both encompassed some of the themes from the year that featured the last walk for Ambrosio. She was featured wearing “Swarovski Wings.”

(FromL) Models Maggie Laine, Zuri Tibby, Josie Canseco, Alannah Walton, Estelle Chen, and Isilda Moreira walk the runway at the end of the 2018 Victoria's Secret Fashion Show on November 8, 2018 at Pier 94 in New York City. - Every year, the Victoria's Secret show brings its famous models together for what is consistently a glittery catwalk extravaganza. It's the most-watched fashion event of the year (800 million tune in annually) with around 12 million USD spent on putting the spectacle together according to Harper's Bazaar. (TIMOTHY A. CLARY/AFP/Getty Images)

It wasn’t the best year for the show, to put it mildly. In fact, it was the worst year in the broadcast’s history on TV.

The Chainsmokers and Kelsea Ballerini were among the live performances, with the honor of a $1 million fantasy bra going to Elsa Hosk.