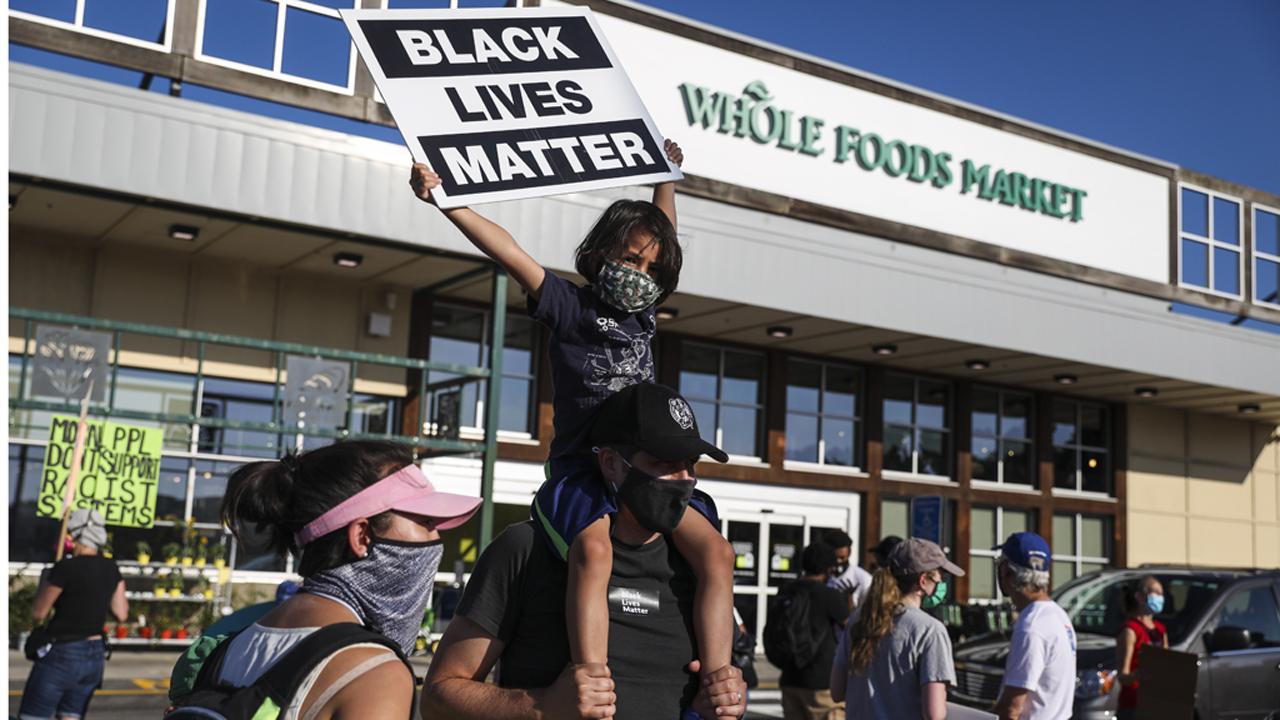 A Whole Foods worker walkout took place at a Portland store on Sunday afternoon after an  employee said he had to resign for refusing to take off a button that said "racism has no place here."

Dylan Woodruff, 23, said he was told on July 27 not to come back to work because of the button, Street Roots reported. Woodruff worked at Whole Foods' Laurelhurst store east of downtown Portland and was expected at Sunday's walkout, a spokesperson for Portland Jobs with Justice, a group supporting the walkout, told FOX Business.

Whole Foods' website declares "Racism has no place here," but the button was not made by Whole Foods. The store's policy bans "any visible slogans, messages, logos or advertising that are not company-related, on any article of clothing."

"Firing a worker for wearing [Whole Foods'] own slogan is just another indignity on top of the unfair conditions private sector retail workers have been speaking out about for months," a spokesperson for Portland Jobs with Justice told FOX Business.

"I brought up the point that if the only problem with the button I was wearing was that it wasn't Whole Foods-made, I'd take it off if we could get some Whole Foods-made buttons," Woodruff said of his meetings with management, according to Street Roots.

Woodruff had already submitted his formal resignation, but Whole Foods accepted his resignation early and is paying him through the previously set end date, a Whole Foods spokesperson told FOX Business.

Workers at Whole Foods' nearby Pearl location staged walkouts in June and July after one of their coworkers died of coronavirus.

"Retail giants such as Amazon-owned Whole Foods have seen an incredible surge in business since the pandemic and can afford to make things fair for the workers," the Portland Jobs with Justice spokesperson said.

Across the U.S. in Cambridge, Massachusetts, a group of workers who say they were punished for wearing BLM face masks have sued the company. The suit includes Savannah Kinzer, a white woman who says she was fired from Whole Foods for organizing a protest.

A Whole Foods spokesperson said Kinzer was fired for missing shifts, being late to work and leaving mid-shift.

"It is simply untrue that she was separated from the company for wearing a Black Lives Matter face mask," the Whole Foods spokesperson said. "As an employer we must uphold our policies in an equitable and consistent manner. Savannah had full understanding of our policies and was given a number of opportunities to comply."

FOX Business' inquiry to Woodruff was not immediately returned.

This post has been updated to clarify that Whole Foods is paying Woodruff through a previously agreed upon end date after his resignation.