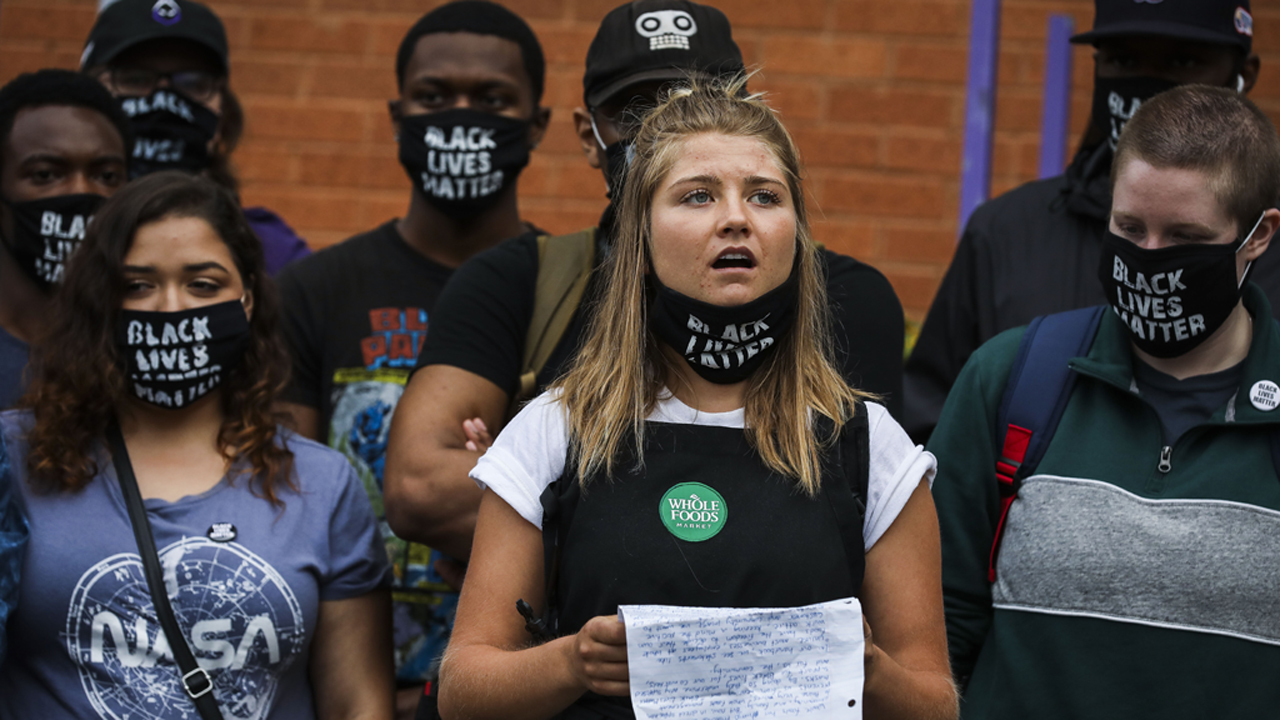 Protests outside of a Whole Foods in Cambridge, Massachusetts, have entered their fourth week after several employees who say they were sent home for refusing to take off their Black Lives Matter face masks in June have now filed a federal class action lawsuit against the grocery chain.

"One month ago, we decided to all wear Black Lives Matter masks after we heard about employees at other stores being sent home for wearing them," one of the lead organizers of the Whole Foods protest in Cambridge, Suverino Frith, said during Saturday's rally. "Especially with Whole Foods' statement on their website that racism has no place here and their donations to the Black Lives Matter Foundation, we felt that it was only right that we were allowed to support the movement too."

"It seems to me that when a company is only willing to outwardly show their support on their website and through donations it just seems like a marketing technique when they're not willing to embody that support in their employees and their front line," Frith said.

Frith accused Whole Foods management of being afraid of losing customers if they allow employees to show solidarity for the movement while working.

The Cambridge protesters, along with the organizers of Whole Foods protests in Seattle, Berkeley, California and Bedford, New Hampshire, have filed a discrimination lawsuit with the Equal Employment Opportunity Commission and National Labor Relations Board against Whole Foods.

According to the lawsuit, the plaintiffs argue that Whole Foods is violating the Civil Rights Act by  "selectively enforcing its dress code policy to ban employees from wearing Black Lives Matter masks and related apparel" which has "adversely affected Black employees and it has singled out for disfavored treatment advocacy and expression of support for Black employees, by both Black employees and their non-Black coworkers who have associated with them and shown support for them through wearing, or attempting to wear, the Black Lives Matter masks at work."

The lawsuit also alleges that Whole Foods has taken retaliatory action against employees for refusing to remove their masks, including sending employees home without pay.

"The actions of Whole Foods against employees are not only illegal but shameful," the lead attorney for the plaintiffs, Shannon Liss-Riordan, said in a press release. "These essential workers have been asked to put their health at risk during this pandemic, and they have done so. Whole Foods’ decision to selectively and arbitrarily enforce its “dress code” to specifically suppress the message that Black Lives Matter paints a picture about what the company values and that picture is not pretty."

The lawsuit alleges that Savannah Kinzer, another employee from the Cambridge store who has been at the forefront of many of the protests, was fired due to "her accumulation of disciplinary points, most of which she received as a result of wearing the Black Lives Matter mask" and for "retaliation for being a leader in organizing the employees to wear the masks and protesting the company’s policy of disciplining employees for wearing the masks."

Kinzer informed Whole Foods management of the lawsuit last Saturday and was fired an hour later, according to the lawsuit.

"It's disappointing to me to see Whole Foods not only not standing up for Black Lives but threatening our jobs and our livelihoods and our incomes for doing so," Firth added. "And so, let's keep fighting and keep showing that this isn’t going to go away until they do the right thing."

At the rally Saturday, Kinzer thanked her coworkers and protesters for their support, and said that real change is going to "take a lot of white people realizing and waking up to the fact that racism and white supremacy is a white people's problem and not a black person's problem that white people have to empathize with."

In addition to the lawsuit, Kinzer launched a GoFundMe campaign to raise money for Whole Foods employees who say they have been sent home without pay as a result of wearing the masks.

As of Sunday morning, the campaign has raised nearly $13,000.

Kinzer did not immediately return FOX Business' request for comment.

A spokesperson for Whole Foods told FOX Business in a statement that while the company cannot comment on pending litigation, "it is critical to clarify that no Team Members have been terminated for wearing Black Lives Matter face masks or apparel."

"Savannah Kinzer was separated from the company for repeatedly violating our Time & Attendance policy by not working her assigned shifts, reporting late for work multiple times in the past nine days and choosing to leave during her scheduled shifts," the spokesperson added. "It is simply untrue that she was separated from the company for wearing a Black Lives Matter face mask. As an employer we must uphold our policies in an equitable and consistent manner. Savannah had full understanding of our policies and was given a number of opportunities to comply."

In addition, Whole Foods said it has zero tolerance for retaliation and that all team members "must comply with our longstanding company dress code, which prohibits any visible slogans, messages, logos or advertising that are not company-related, on any article of clothing."

"We recognize, respect, and take steps to ensure we do not impinge on employees’ legal rights,” the company added. "Our Team Members are also provided with several different options for reporting concerns, including raising concerns directly with store leadership and reporting complaints confidentially and anonymously through the Whole Foods Tipline."

The company noted that an inclusive culture "has always been a source of great pride for the company, and we strive to make our workplace safe and inclusive for all."