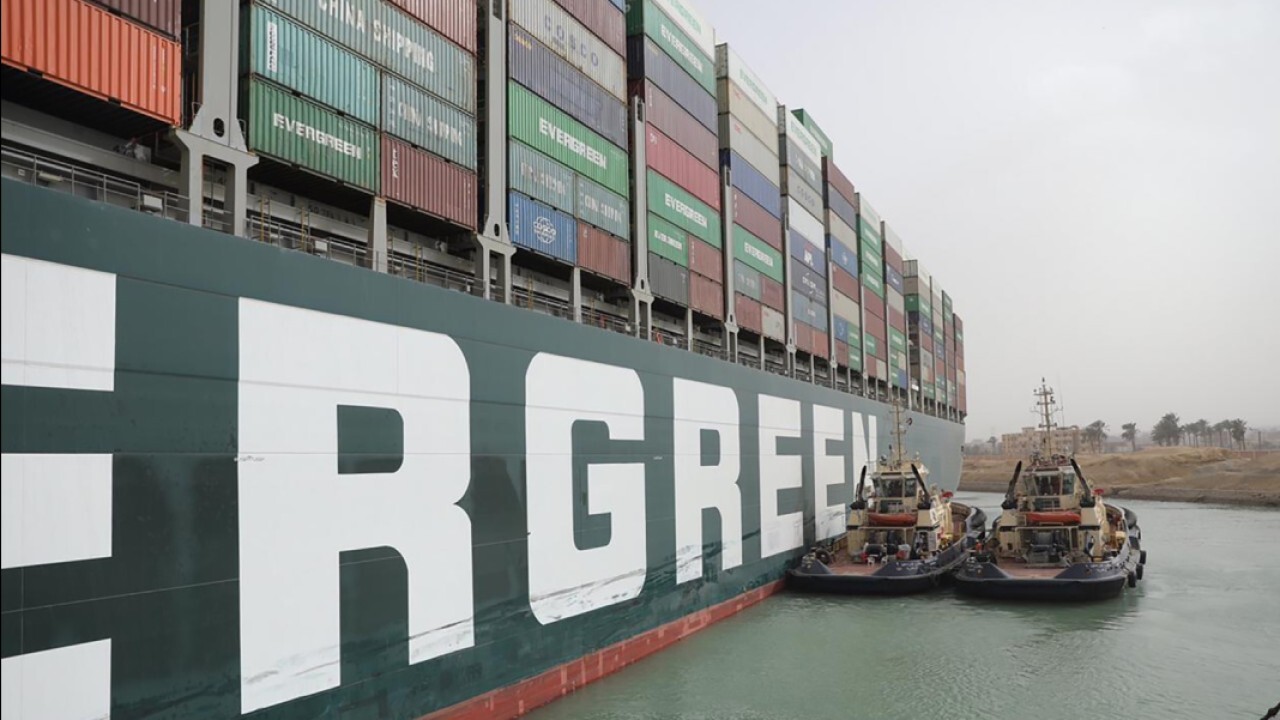 Ship operators have started rerouting tankers and containers away from the Suez Canal -- in some cases sending them on a two-week extended voyage around the southern tip of Africa -- as they increasingly bet on a prolonged closing of the key waterway.

"This now looks like it will take a few weeks," said Anoop Singh, the Singapore-based head of tanker analysis at shipping broker Braemar ACM.

Dredgers were working again Friday morning to remove hundreds of thousands of cubic feet of sand around the bow of the 1,300-foot Ever Given, operated by Taiwan-based Evergreen Group, in order to reach a water depth of roughly 50 feet needed to remove the ship, according to the Suez Canal Authority.

People familiar with the rescue effort said the dredgers would likely stop working Friday afternoon when tugboats would return to the site at 4 p.m. local time to try to refloat the ship, though those plans could change. A spokesperson for SCA said it would issue an update later Friday.

An executive at the parent company of ship-owner, Shoei Kisen Kaisha Co., said during a press conference in Tokyo that they aim to dislodge the ship by Saturday night Japan time. "We're prioritizing to unground the ship so that the blockage of the canal can be dissolved," he said.

More diggers are being brought in and salvage teams are making plans to siphon out fuel and ballast water to lighten the ship, according to one person involved in the operation.

"It's a difficult process. The ship's bow is still wedged in the canal wall and there could be some structural damage," this person said. "If you try to yank it out, things could get worse and fuel could spill out. It's the worst place in the canal for such a big ship to be stuck."

Meanwhile, shipping companies have reported more than 300 idled vessels on either side of the canal, which links the Mediterranean Sea with the Red Sea and is a crucial waterway for global trade and energy shipments. For days, as Egyptian authorities tried to clear the canal, shipowners and operators have debated whether to reroute -- adding weeks and tens of thousands of dollars to the cost of voyages -- or wait for the canal to free up again.

Many shipowners have now decided to reroute. Early Friday, the Ever Greet, a sister-ship to the Ever Given, was rerouted away from Suez and toward Africa's Cape of Good Hope, according to MarineTraffic, a shipping tracker. The ship was sailing from Malaysia to Rotterdam.

"It was supposed to go through Suez...it's going [via] Cape Town now," said a manager at the Ever Greet's owner, Nissen Kaiun KK.

Two other container vessels, one headed from Rotterdam and another from the U.K., abruptly changed course from an earlier track through the Mediterranean, according to MarineTraffic. A crude tanker and several giant tankers carrying liquefied natural gas have all changed course in recent hours, and are now heading to the Cape of Good Hope, according to ship trackers.

Most vessels that were already close to the canal are now crowding the waterway's two entrances. So far, most of these ships are holding tight. Analysts said the longer sailings will further scramble the world's carefully choreographed ballet of container-based shipping.

While European and Asian businesses are likely to feel the brunt of the disruption, importers in the U.S. could also feel an impact. Demand for containers and berthing space soared late last year and into this year, well before the Suez crisis. Backups in container ports, especially along the West coast of the U.S., have grown during a normally slack period in shipping demand. That has tied up inventories for weeks in some cases, as ships wait to reach berths while unloaded containers sit for long periods at packed freight terminals.

The Suez blockage "will drastically reduce global container shipping capacity and lead to further delays for American importers to get their orders delivered," said Lars Jensen, chief executive of Copenhagen-based SeaIntelligence Consulting. "This couldn't have come at a worse time because all ships available have already been deployed."

While customers around the world can expect delays, European ports are also girding for congestions once ships that are rerouting eventually get into port. Gateways like Antwerp and Rotterdam could see waiting times to lengthen significantly, analysts said.

"On the Asia-Europe trade, every ship that is available to shipping lines has been deployed, with vessel utilization effectively 100% following sustained heavy demand," said Greg Knowler, senior European editor at the Journal of Commerce. "Cargo owners can expect canceled sailings, ports being skipped, and an increase in the amount of cargo rolled over to later sailings."