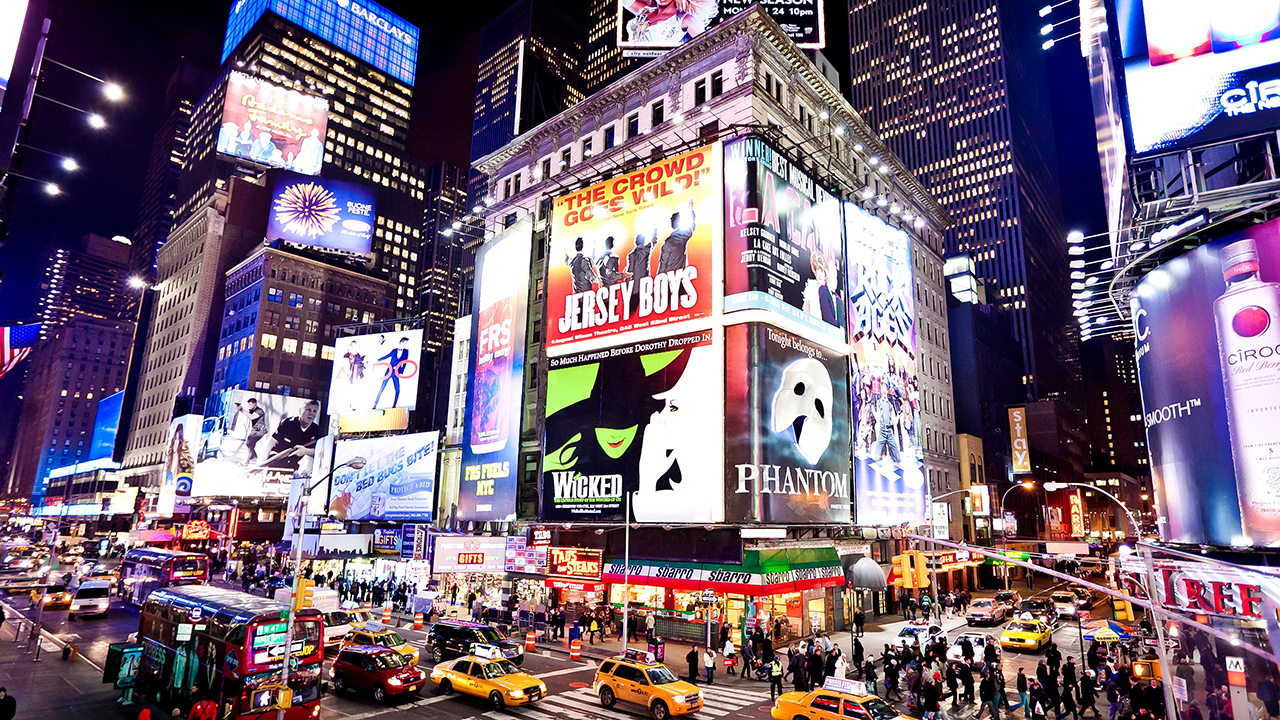 As New York state continues to ease pandemic restrictions, cultural spaces are coming back to life. Movie theaters in New York City were able to open with reduced capacity March 5. Arts and entertainment venues can welcome back attendees April 2, with a maximum of 100 people indoors.

While the news is a welcome relief for many, it still leaves a looming question about when Broadway, an industry central to the city's cultural identity and economic vitality, can begin again.

Shows are canceled through May 30 of this year, but few theater professionals are expecting a return in the spring or summer. Instead, they are eyeing the fall and winter as a more opportune time to revive an industry that came to a complete halt almost one full year ago. One much-anticipated production, a revival of "The Music Man" starring Hugh Jackman, has set an opening date of Feb. 10, 2022.

Broadway shows are canceled through May 30 of this year, but few theater professionals are expecting a return in the spring or summer. (AP Photo/Mary Altaffer)

Producers and creators said they are eager to get back. "I can't let this pandemic end a 35-year legacy," said Andrew Lloyd Webber, the famed composer behind "The Phantom of the Opera," referring to the show's record-breaking run, which started in 1986 on London's West End and in 1988 on Broadway.

Returning to theaters isn't so simple, given that Broadway's financial model works only when shows have the ability to play at full capacity, according to theater professionals. That is because of production costs that can easily top $15 million for a musical, as well as running expenses, such as salaries for cast and crew and theater rentals, which can amount to hundreds of thousands of dollars a week.

In contrast, movie theaters and other venues can better manage financially with reduced capacity, allowing them to work within the new state guidelines.

Broadway theaters can soon open under the guidelines, which increase the maximum capacity to 150 with proof of a negative Covid-19 test required of all attendees. And there are plans to use Broadway venues in the coming weeks as part of the NY PopsUp series of events designed to bring culture back into the lives of New Yorkers.

The pop-up programs aren't expected to be full-scale Broadway shows, however. And state officials haven't given a timeline for when capacity will be increased to make a night on Broadway a true reality. "We will continue to work closely with the industry to safely increase capacity limits as the public health conditions permit," a state spokesperson said.

Returning to theaters isn't so simple, given that Broadway's financial model works only when shows have the ability to play at full capacity, according to theater professionals. (AP Photo/Charles Sykes, file)

Also weighing on the mind of the theater industry is when theatergoers will feel safe to return, even if the green light is given by the state. It is an issue that goes beyond Broadway and affects sporting venues, which New York state has also allowed to reopen with limited capacity, and other performance spaces. But Broadway's theaters, some of which date back more than a century, are known for being cramped in a way that defies any notion of social distancing.

Broadway officials said they are mindful of the issue. Charlotte St. Martin, president of the Broadway League industry trade group, said many safety protocols are being considered for Broadway's return, ranging from making modifications to air-conditioning systems to reducing contact points between theatergoers and theater personnel.

Programs might be picked up by audience members themselves, for example, rather than being handed out by ushers. "We can stack them at the end of aisles," said Ms. St. Martin.

Other stumbling blocks might delay Broadway's reopening. As much as some producers would like to open the doors as soon as they can, they said they need to ensure that they have a good advance sale, which doesn't happen overnight.

"In my dream world, I'd want to have six months" to sell tickets, said Chris Harper, one of the producers of a revival of "Company," which was set to open last March. Instead, Mr. Harper said he would probably have to work with a tighter time frame, but he vows to open his production in any case.

As popular as long-running musicals such as "Phantom," "Wicked" and "The Lion King" are, some in the industry noted that such shows are very dependent on an out-of-town audience. (iStock)

There is also the question of whether some shows will be in a better position to open sooner than others. As popular as long-running musicals such as "Phantom," "Wicked" and "The Lion King" are, some in the industry noted that such shows are very dependent on an out-of-town audience.

That could pose a challenge for them given that tourism isn't expected to recover for some time in the city. And that might leave more room for newer shows or ones that appeal to a theater-savvy New York crowd, industry professionals said.

One-act shows might have a special appeal to theatergoers, since an intermission almost guarantees more interaction between members of the audience as they line up for the bathroom or at the lobby bar.

"They don't have to think about mingling for 20 minutes," said Kevin McCollum, a veteran producer who is part of the team behind "Six," a much-anticipated one-act musical that is slated to open upon Broadway's return.