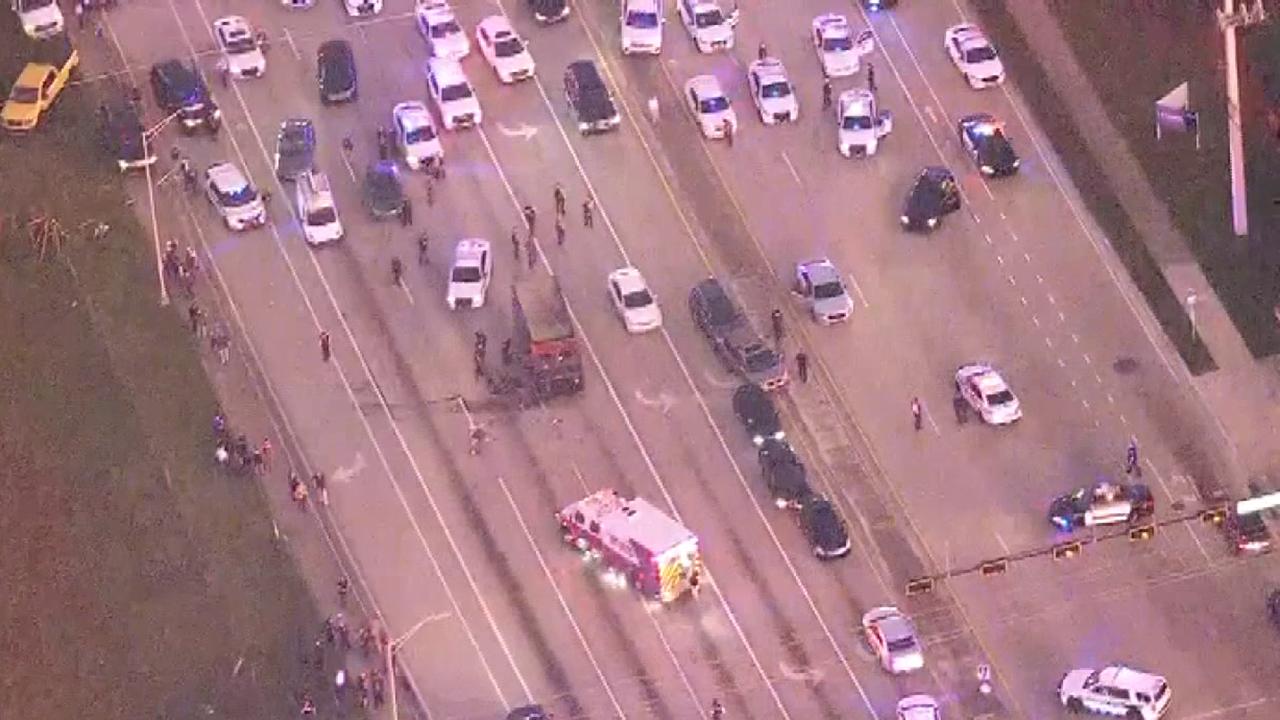 Lawyers for the family of an innocent bystander killed in a shootout between police and a pair of men who hijacked a UPS truck say they’re investigating how law enforcement handled the events.

Cops responding to the Dec. 5 hijacking of a UPS delivery truck chased the vehicle – with the two thieves and a hostage inside – through Miami, Florida rush-hour traffic for roughly 23 minutes before coming to a stop at a busy intersection and opening fire, attorney Matt Morgan said.

Morgan is representing the family of Richard Cutshaw, one of four people fatally shot during the minute-long shootout between police and the criminal duo, he said during a Tuesday press conference.

Law enforcement stand near a vehicle that appears to be part of the crime scene where four people were killed, Thursday, Dec. 5, 2019. (Charles Trainor Jr./Miami Herald via AP)

“In this instance, bullets sprayed across this intersection as if it was a warzone. But it wasn’t a warzone – it was an intersection during… rush hour traffic with civilians walking by, people coming and going from work…there’s cars parked literally right next to the vehicle that was being fired upon,” Morgan said. “Police officers were using vehicles as a shield to shield themselves from bullets that were spraying in their direction.”

Approximately 200 bullet rounds were fired by 20 police officers from the five different agencies that responded to the scene, Morgan said.

Cutshaw, a union representative, was waiting in rush-hour traffic last week when officers ran up and opened fire from behind the cars of innocent bystanders. The officers were aiming at a UPS truck that had been hijacked by two cousins who had robbed a jewelry store and led police on a wild rush-hour chase.

“Before any other consideration for their own safety, before any other consideration, they have to consider the safety of the public…was that done, or do we have a situation where we had a reaction to a situation?” Morgan said during the press conference. “Police officers, police departments have to follow their own internal policies and procedures as it relates to using deadly force and also as it relates to chases… Ultimately, we want to investigate those policies and procedures to see if they were followed in this particular case.”

Morgan said the firm has spoken with the Florida Department of Law Enforcement about to review the proper procedures. The department did not immediately respond to FOX Business' request for comment on Wednesday

“I can guarantee you this particular fact-pattern will be a case study for law enforcement for decades to come about what not to do when you end a chase in a busy intersection,” he said. “We don’t have to be sitting here mourning the loss of Mr. Cutshaw.”

Ordonez's relatives have also questioned why officers unleashed the torrent of gunfire when the truck got stuck in rush- hour traffic.