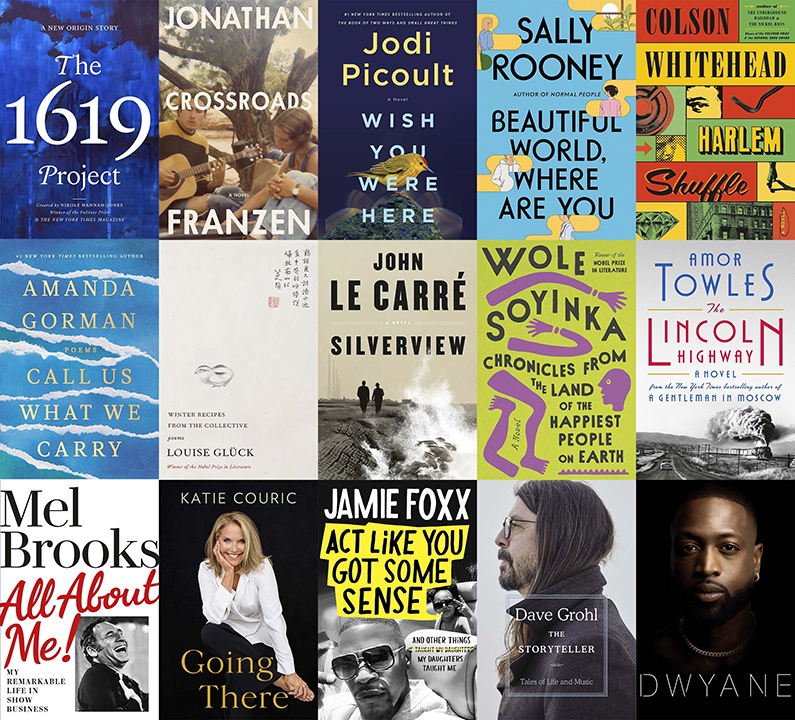 Goldin Auctions founder and CEO Ken Goldin on auctioning President Trump's signed copy of 'The America We Deserve' with an inscribed message to former New York mayor Rudy Giuliani and rookie cards up for sale.

NEW YORK — Near the end of 2020, the pandemic had lasted long enough for author Jodi Picoult to try something that seemed unthinkable for novelists in its early stages — turn it into fiction.

"At the beginning of the pandemic, I couldn’t even read, much less write. I didn't have the focus," says Picoult, who last November began the novel "Wish You Were Here." The fall release is set in New York and the Galapagos during the first two months of the pandemic, March-May of last year.

"I couldn't find myself in my own life; writing the book was therapeutic," she added. "I finished a draft in February, very quickly. And the whole time it was going on, I was talking to friends of mine, telling them, ‘I don’t know if this is going to work.' But I had very positive responses and feel that, unlike almost any other topic, I have written a book about this one experience that everyone on the planet has lived through."

From wars to plagues to the Sept. 11 attacks, the literary response to historic tragedies has been a process of absorbing trauma — often beginning with poetry and nonfiction and, after months or years, expanding to narrative fiction. The pandemic has now lasted into a second fall season for publishing, and a growing number of authors, among them Picoult, Louise Erdrich, Gary Shteyngart and Hilma Wolitzer, have worked it into their latest books.

Shtyengart's "Our Country Friends" features eight friends who gather in a remote house as the virus spreads, a storyline for which he drew upon Chekhov and other Russian writers, and upon Boccaccio's 14th century classic "The Decameron." Amitava Kumar's "A Time Outside This Time" tells of an Indian-American author working at an artists retreat and trying to make sense of President Donald Trump, 24-hour media and an equally relentless virus. Kumar began the book before the pandemic, but found it fit well — too well — into an existing wave of misinformation, "fake news," reaching from the U.S. to his native India.

TRUMP RIPS JPMORGAN'S DIMON OVER CHINA THREAT: HE IS 'NO PATRIOT'

"The Indian Prime Minister was asking people to bang their plates and pots at a certain hour; people in his conservative party were touting the powers of cow dung and cow urine," he says. "A minister of health said that the rays of the sun would build immunity. So, I was thinking, what exactly is the work a novel can do in the time of the novel coronavirus?

"I’m telling you all this because I wasn’t at all in doubt about mentioning the pandemic — I didn’t think it could be avoided."

Erdrich's "The Sentence," her first since the Pulitzer Prize-winning "The Night Watchman," centers on a Minneapolis bookstore in 2020 and the city's multiple crises, from the pandemic to the murder of George Floyd. Like Kumar, Erdrich had the original idea — a haunted bookstore — well before the virus spread.

"By the end, I realized that although we might want to forget parts of 2020, we should not forget," she wrote in a recent email. "Obviously, we can’t forget. We have to use what we learned."

Wolitzer's "The Great Escape" is a new story in her collection "Today a Woman Went Mad in the Supermarket," which includes a foreword by "Olive Kitteridge" author Elizabeth Strout. "The Great Escape" is the first work of short fiction in years by Wolitzer, known for such novels as "The Doctor's Daughter" and "An Available Man." The 91-year old author lost her husband to the virus, and drew upon her grief as she updated characters from previous stories, the married couple Howard and Paulette.

"I found it cathartic," Wolitzer says. "I wrote it in a week and I couldn't stop writing about it. The images about what had happened to us kept coming up and I felt like I had to use them."

Fiction this fall will also include works from Jonathan Franzen, Sally Rooney, Lauren Groff, Colm Toibin and Strout, and from four of the past six winners of the fiction Pulitzer Prize: Erdrich, Richard Powers, Colson Whitehead and Anthony Doerr. "Silverview" is a posthumous release from John le Carre, who died last year. Gayl Jones' "Palmares" is her first novel in more than 20 years, and Nobel laureate Wole Soyinka's "Chronicles from the Land of the Happiest People on Earth" is the Nigerian playwright's first novel in nearly 50 years.

Fiction also is expected from Percival Everett, Anita Kopacz, Atticus Lish and Amor Towles, and debut novelists ranging from Honorée Fanonne Jeffers and Wanda M. Morris to the already famous Hillary Clinton, who has teamed with Louise Penny on the thriller "State of Terror."

"There's a very full list of books coming up. We've had a very good year in sales so far and I see that only strengthening in the autumn," says Barnes & Noble CEO James Daunt.

Inaugural poet Amanda Gorman has two books out this fall, the picture story "Change Sings" and the poetry collection "Call Us What We Carry." Louise Glueck's "Winter Recipes from the Collective" is her first poetry book since winning the Nobel Prize last year, and new works also are expected from Pulitzer Prize-winners Paul Muldoon, Frank Bidart and Tracy K. Smith, and from Kevin Young, Amanda Moore and Mai Der Vang.

Muldoon also assisted on one of the fall's most anticipated memoirs: Paul McCartney's "The Lyrics: 1956 to the Present," a $79 double volume which the Irish poet helped edit. Hillary Clinton's longtime aide and former Rep. Anthony Weiner's estranged wife, Huma Abedin, has written "Both/And," and #MeToo pioneer Tarana Burke tells her story in "Unbound."

Summer bestseller lists included such Trump-related works as "I Alone Can Fix It," and this fall will test the continued appeal of stories about the former president, with new work coming from Bob Woodward and Washington Post colleague Robert Costa ("Peril"), and from ABC News correspondent Jon Karl ("Betrayal").

Former national security official Fiona Hill, a key witness during Trump's first impeachment trial, for pressuring Ukraine leaders to investigate then-candidate Joe Biden, tells her story in "There Is Nothing for You Here." Former New Jersey Gov. Chris Christie's "Republican Rescue" is an attack on his party's conspiracy theories, including that the election was stolen from Trump, the contention of Mollie Hemingway's "Rigged: How the Media, Big Tech, and the Democrats Seized Our Elections."

One political genre is largely absent: Books by the opposition to a sitting president, a lucrative business during several previous administrations. Conservative books have a large audience; right-wing commentator Mark R. Levin's "American Marxism" has sold hundreds of thousands of copies this summer. But publishers and booksellers struggled to name any upcoming works centered on criticism of President Biden.

"The focus continues to be on Trump," says Mark Laframboise, a buyer for the Politics & Prose bookstore in Washington, D.C.

Thomas Spence, publisher of the conservative Regnery Publishing, said his company had profited well from books about President Bill Clinton and President Barack Obama, but was not even seeing proposals about Biden. Hemingway's "Rigged" is one of Regnery's major fall releases.

"Conservatives don't worry about him personally. They're worried about the policies he's pursuing," Spence says. "And that is so different from the Clinton and Obama years when Regnery sold mountains of books criticizing both of those presidents."

Debate over the meaning of the country's founding continues with works by Pulitzer-winners Gordon Wood and Joseph Ellis, along with Woody Holton's 700-page "Liberty Is Sweet: The Hidden History of the American Revolution," endorsed by Wood and by an author he has otherwise disagreed with, "1619 Project" creator Nikole Hannah-Jones.

A book-length edition of the "1619 Project" expands upon the Pulitzer-winning New York Times report that, by placing slavery at the center of the American narrative, has been either celebrated as a needed corrective to traditional history or condemned as unpatriotic, to the point of being banned from some schools.

Hannah-Jones quotes from Holton in the "1619 Project" book, which includes essays, poems and fiction, with Jesmyn Ward, Terry McMillan, Terrance Hayes and Jason Reynolds among the contributors. In a note to readers, publisher Chris Jackson of One World calls the book an exploration of the "twinned lineage" of slavery and resistance, a conflict echoed in the subtitle of Ellis' work, "The Cause: The American Revolution and Its Discontents."

"The 1619 Project was never meant to be a simple academic or, worse, partisan political argument," Jackson writes, "but a story about what's really at stake in how we envision our history and identity as a nation: our lives and our future. This is a clarifying and often inspiring epic of struggle, one whose ending we can all have a hand in writing."