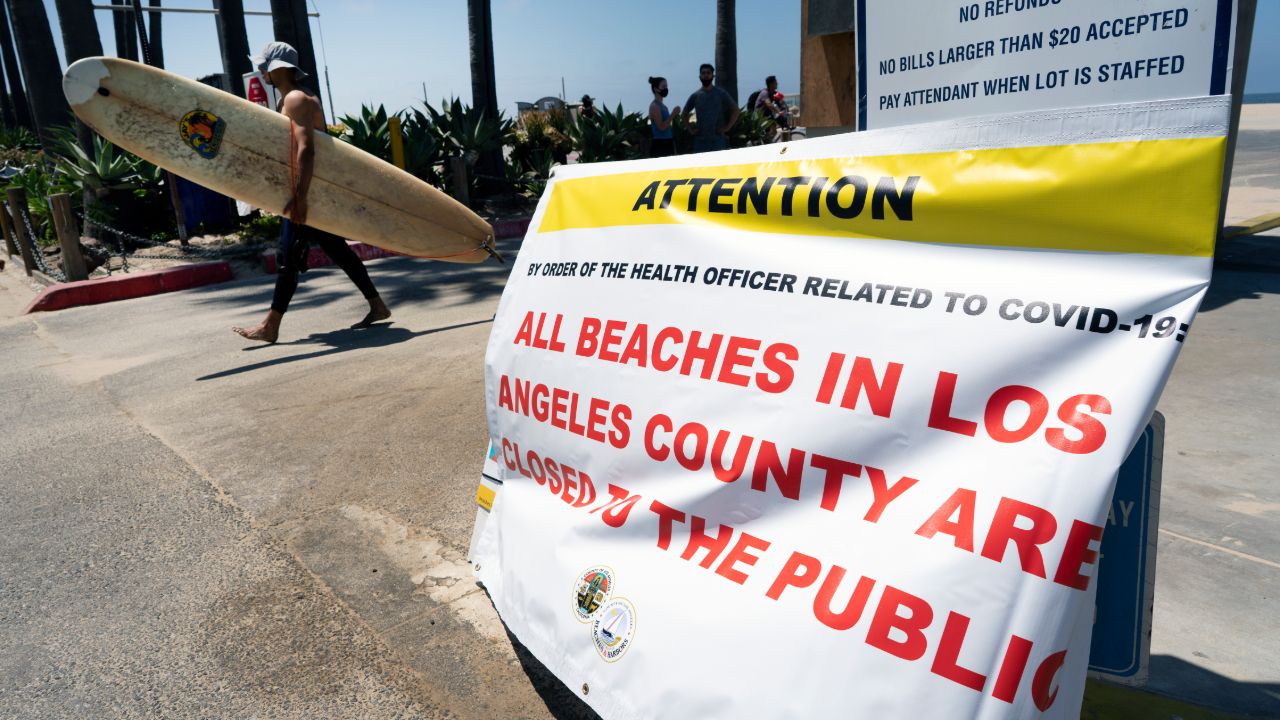 LOS ANGELES — California Gov. Gavin Newsom warned local elected officials on Friday they risk state sanctions if they don't enforce health orders as the coronavirus pandemic worsens, while about 200 state inspectors fanned out to look for violators over the long holiday weekend.

“A local government that refuses to abide by, ensure compliance with, or take enforcement action against noncompliance with these statewide public health directives, or that takes action that is otherwise incongruent with these directives, could jeopardize their eligibility for state funding,” Newsom said in letters to local officials.

The state budget that took effect this week includes $2.5 billion intended to help local governments pay for services that are needed because of the pandemic. But it is contingent on them following emergency health orders designed to slow the spread of the virus.

Law enforcement and other officials in some areas have publicly said they will not enforce the state health orders. But Newsom noted that it is a misdemeanor to violate state or local emergency orders or most local ordinances and encouraged “all peace officers” to enforce the orders.

“We are in unprecedented times,” he wrote, saying it is important to fight the pandemic “as a unified California.”

With testing showing a rising COVID-19 testing positivity rate and increasing hospitalizations, Newsom has rolled back or limited businesses reopening in Los Angeles and 20 other counties. San Diego County, the state’s second-largest behind L.A. County with more than 3 million people, was added to the state’s watch list on Friday.

Recently reopened bars, indoor restaurant dining and other indoor entertainment venues were ordered closed back down in those counties for at least three weeks.

A movie theater is seen closed due to the coronavirus pandemic Thursday, July 2, 2020, in Brea, Calif. (AP Photo/Jae C. Hong)

About 200 state inspectors fanned out to enforce the health rules on Friday, and similar numbers will be out Saturday and Sunday, said Brian Ferguson, a spokesman for California’s Office of Emergency Services. About half are from Alcohol Beverage Control, and the rest from the Division of Occupational Safety and Health and other state licensing entities.

They are part of new “strike teams” from 10 state agencies that Newsom on Wednesday said would focus on counties with the most restrictions.

"We will be going directly to those who thumb their nose at public health and safety," Ferguson said in a statement. “State government will be out in force this weekend to make sure all California businesses and service providers are doing their part to slow the spread of COVID-19.”

The strike teams made 142 contacts with businesses on Thursday, their first day of operation, Ferguson said, and issued seven citations: two in Kern County, three in Los Angeles County and two in Santa Clara County.

Where possible and permitted, the battered restaurant industry moved tables outdoors onto sidewalks or into streets in hope of cashing in on the normally lucrative holiday.

The state also is fighting an outbreak in its prisons. The virus is suspected of killing two more death row inmates Friday at San Quentin State Prison, where about 40% of inmates are now infected, corrections officials said. Two other condemned inmates previously died at the prison near San Francisco.

Surfers gather their belongings after being asked to leave by security patrolling the beach at Half Moon Bay State Park in Half Moon Bay, Calif., Friday, July 3, 2020. (Jose Carlos Fajardo/Bay Area News Group via AP)

VIRUS CONCERNS GROW – AS DO CROWDS FLOCKING TO JERSEY SHORE

Some, however, were intent on trying to keep it a normal summer: Dozens of surfers caught the morning swells at Malibu's Surfrider Beach despite the ban.

“There's only so many sheriffs so, realistically, they can't be everywhere all the time, and some people are just going to break the law and break the guidelines of public sense, common decency and the recommendations of our trusted public health officials," city spokesman Matt Myerhoff said.

The holiday beach closures began Friday from Los Angeles County northward through Ventura and Santa Barbara counties. To the south in Orange County, hugely popular beaches such as Huntington and Newport were to close Saturday and Sunday, while San Diego did not plan any shutdowns.

San Diego County beaches remained open and saw tens of thousands of visitors on Friday. Many clustered in socially distanced groups when they weren't splashing in the shallows. But lifeguards said not everyone was obeying public safety rules despite public address system reminders. In Encinitas, lifeguards provided free masks.

While beaches, fireworks shows and businesses could be regulated, authorities warned that ordinary gatherings were being identified as the source of COVID-19 transmission.

On the state's north coast, far from population centers with millions of people, Humboldt County said Friday that about a quarter of its 144 cases were reported in the past two weeks.

“This has been driven largely by residents gathering and visiting between households both locally and while traveling, as well as by illness occurring in the cannabis industry workforce,” said Dr. Teresa Frankovich, the county health officer.

For most people, the new coronavirus causes mild or moderate symptoms, such as fever and cough that clear up in two to three weeks. For some — especially older adults and people with existing health problems — it can cause more severe illness, including pneumonia, and death.

A young skateboarder takes a run at a sparsely crowded Venice beach skateboard park ahead of the 4th of July holiday on Friday, July 3, 2020 in Los Angeles. (AP Photo/Richard Vogel)

Some communities made creative efforts to keep the spirit of the holiday.

Napa asked residents to submit photos of their decorated homes and patriotically costumed pets for a city contest.

The city of Fremont was hosting a virtual “porch parade,” with judges awarding prizes for the best decorations.

Many cities were organizing livestreams of “virtual fireworks,” while the city of Gilroy planned to launch actual fireworks but “higher in the sky” than usual to accommodate social distancing.

A McDonald’s restaurant employee in Oakland said she was grabbed, hit and slapped by a customer last weekend after telling him he had to wear a mask to pick up his order at a drive-thru window, the San Francisco Chronicle reported.