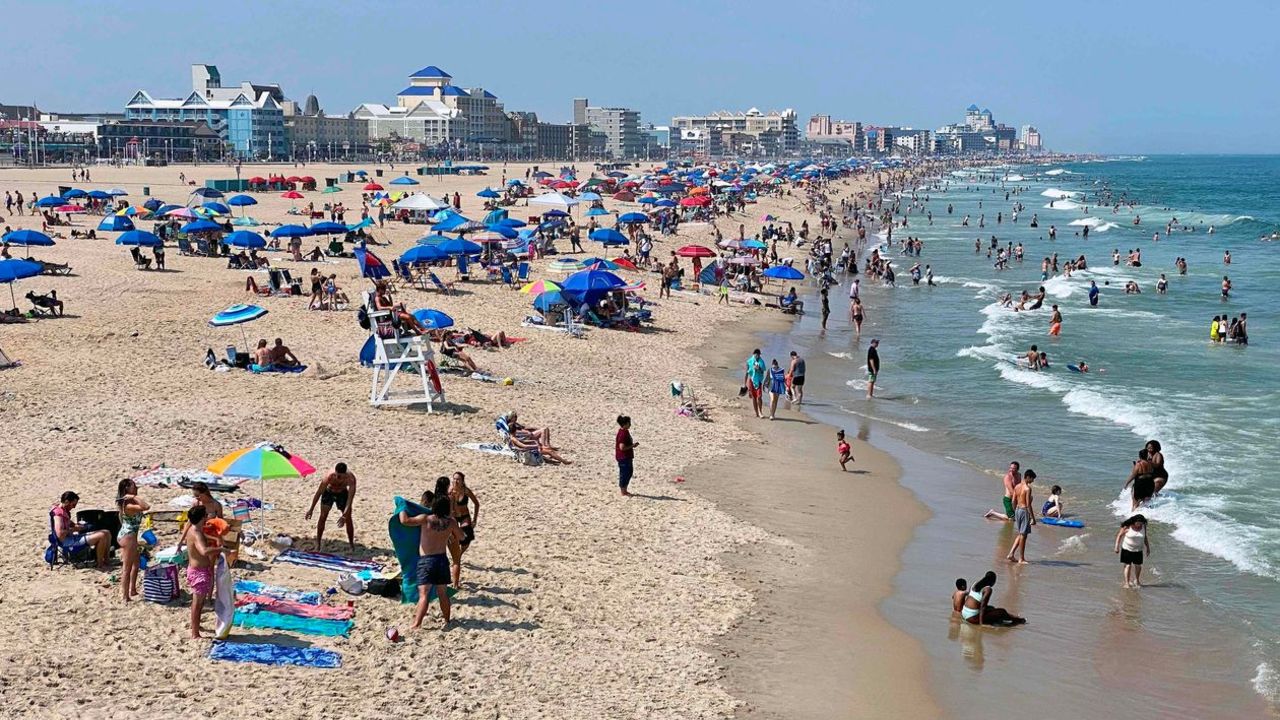 Coronavirus cases in the U.S. rose to another single-day high as the nation entered a Fourth of July weekend marked by restrictions on many activities and warnings to maintain social-distancing practices.

The U.S. reported a record 52,291 new cases on Thursday, about 1,000 more than the previous day, according to data compiled by Johns Hopkins University. The U.S. is the worst-hit nation globally and accounts for about a quarter of the more than 11 million coronavirus cases world-wide, according to Johns Hopkins.

The rise in cases has led state and local leaders to pause reopening plans and shift policies.

In Washington state, Gov. Jay Inslee said he would pause a phased reopening for all counties for two weeks. He also announced a statewide directive for businesses to require face coverings of all employees and customers.

“The better we can protect ourselves from the virus, the better we can avoid repeating some of the painful measures we had to take in the spring to shut down the economy,” Mr. Inslee said.

In Texas, where cases have been rising for weeks, Gov. Greg Abbott changed course on Thursday, issuing an executive order mandating that residents wear masks when out in public. Other states, including Pennsylvania, Oregon and California, have also implemented statewide mask requirements in recent weeks. The Cincinnati city council passed an ordinance Friday making wearing a mask mandatory in public places starting July 9.

Government leaders across the country have urged people to use caution in their Fourth of July celebrations.

In New York, the annual Macy’s Inc. fireworks show was taking place as five-minute displays throughout the week in unannounced locations to prevent viewers from congregating. Los Angeles County and San Francisco have canceled fireworks shows, citing health concerns, while other places have moved festivities online.

President Trump addressed a crowd, with Mt. Rushmore in the background, on Friday night in South Dakota. (ALEX BRANDON/ASSOCIATED PRESS)

At Mt. Rushmore, a visit by President Trump was to be accompanied by a fireworks display. The event, expected to draw 7,500 people, has raised concerns about social distancing and wildfire risks.

Ahead of the Mt. Rushmore event, Kimberly Guilfoyle, a top campaign aide and the girlfriend of Donald Trump Jr., tested positive for the virus in South Dakota, said a person familiar with the events. Mr. Trump Jr., who tested negative, and Ms. Guilfoyle didn’t travel with the president to the state and weren’t with him before the festivities. The couple, who had been headlining fundraisers in the region, were expected to drive back to the East Coast to avoid contact with others.

Beaches in parts of Southern California will be closed, including those in Los Angeles and Ventura counties and parts of Orange County. Beach closures have also hit Miami and other South Florida counties, several weeks after reopening.

The mayor of Miami-Dade County, Carlos Gimenez, also ordered a countywide curfew from 10 p.m. until 6 a.m. and rolled back the reopening of several types of entertainment venues, including movie theaters, strip clubs and bowling alleys.

In the New York City area, residents appeared to have abided by suggestions from health officials to stay away from beaches, with crowds at many places along the Jersey Shore, in Coney Island and in the Hamptons far sparser than normal for the beginning of July 4 weekend.

Meanwhile, more local governments are asking people who have traveled to states with surges in coronavirus cases to quarantine for 14 days upon return.

The governor of the Mexican state of Sonora announced that the border with Arizona would be closed for the holiday weekend to nonessential travelers due to the sharp rise in cases there.

In some states, hospitalizations have been rising sharply. In Arizona, 91% of all intensive-care unit beds and 85% of all hospital beds in the state were in use on Friday, according to the state health department. In Florida, 81% of the state’s available intensive-care beds and 71% of all its hospital beds were occupied, state government statistics show. By contrast, in Massachusetts, where cases have been on the decline, only 66% of all hospital beds were being used on Friday.

Health officials look at a variety of metrics, including new cases, percent of positive test results, hospitalizations and deaths to gauge an area’s level of spread.

Infectious disease epidemiologists caution that deaths typically lag behind other indicators, as the disease often progresses over the course of weeks in the most severe cases. And many public-health experts have warned that reported totals in countries including the U.S. and China have been broadly undercounted.

The U.S. has the highest number of fatalities in the world, with more than 129,000, according to data from Johns Hopkins. The U.S. currently has 39 deaths per 100,000 residents, which places it among the top 10 countries in the world in that metric.

However, the U.S. it doesn’t have the highest percentage of fatal cases —currently at about 4.7%, according to data from the COVID Tracking Project. And the case-fatality count in the U.S. has dropped a bit, from about 5.1%, over the past two weeks.

Brazil continues to record by far the highest daily death tolls, with another 1,290 deaths registered Friday. That brings the country’s total tally to 63,124 deaths. Brazilian President Jair Bolsonaro, who has played down the risks of the virus, signed into law a decree mandating that face masks be worn in public. But he vetoed a part of the bill that would have required masks in churches, schools and businesses.

The dramatic jump in U.S. cases has caught the attention of Mexican officials. Claudia Pavlovich, the governor of the Mexican state of Sonora, which sits across the border from Arizona, said her state would set up “sanitary filters” to block all nonessential travel into Mexico this holiday weekend. The state’s beaches, popular with Arizona tourists, would stay closed to dissuade travel, she said.

Mexico itself likely has more than 50,000 deaths from the pandemic, according to data collected by a government population agency that reviewed death certificates across the country.

The virus continues to spread rapidly in Chile, one of the hardest hit countries in Latin America. The country has reported 288,089 cases and 6,051 deaths from Covid-19.

Peru reported 181 deaths from Covid-19 over the past 24 hours, bringing the total confirmed deaths to 10,226. Peru continues to struggle to control the pandemic as it approaches 300,000 cases, second in Latin America after Brazil. Health experts expect little chance the situation will improve as the government this week lifted a lockdown for most of the country, hoping to restart an economy in crisis.

In Colombia, where total confirmed cases have risen to nearly 110,000, a tax-free shopping day designed to help jump-start the economy was limited to online-only purchases. During a similar event last month, shoppers looking to avoid the country’s steep 19% sales tax swamped stores. Health officials criticized the government because the packed stores were seen as super-spreader events.

In India, new cases rose by 20,903, a single-day record, raising the total tally of infections to 625,544, according to data from the Health Ministry. India has so far reported a total of 18,213 deaths. As cases continue to rise, the government has extended lockdowns in areas with high caseloads through July.

Israeli Prime Minister Benjamin Netanyahu announced new restrictions late Thursday, including a limit of 20 people inside houses and in most closed spaces, and up to 50 people at synagogues, event halls, bars and clubs. He said there had been a 50% rise in serious coronavirus cases since the start of the week.

On Friday, South Korea reported 63 new cases as infections linked to clusters outside the Seoul metropolitan area increased. About 50 cases have been linked to a Buddhist temple in Gwangju, a city about 200 miles from Seoul.

“We have not seen a mass spread of infections, but we are approaching a dangerous degree of risk,” South Korea’s vice health minister, Kim Gang-lip, said.

In Japan, the capital city of Tokyo has seen a resurgence of cases in recent days. On Friday, city officials confirmed 124 new cases, hitting triple digits for the second straight day in about two months. Many of the cases involve people in their 20s or 30s and are linked to nighttime entertainment areas where aggressive testing has been conducted recently, contributing to the rise in positive tests, according to the Tokyo government.

While daily new cases in European nations are still generally higher than in many Asian countries, numbering in the mid- to high hundreds, they have mostly fallen or plateaued in recent weeks, barring isolated or temporary upticks in Germany and Portugal.