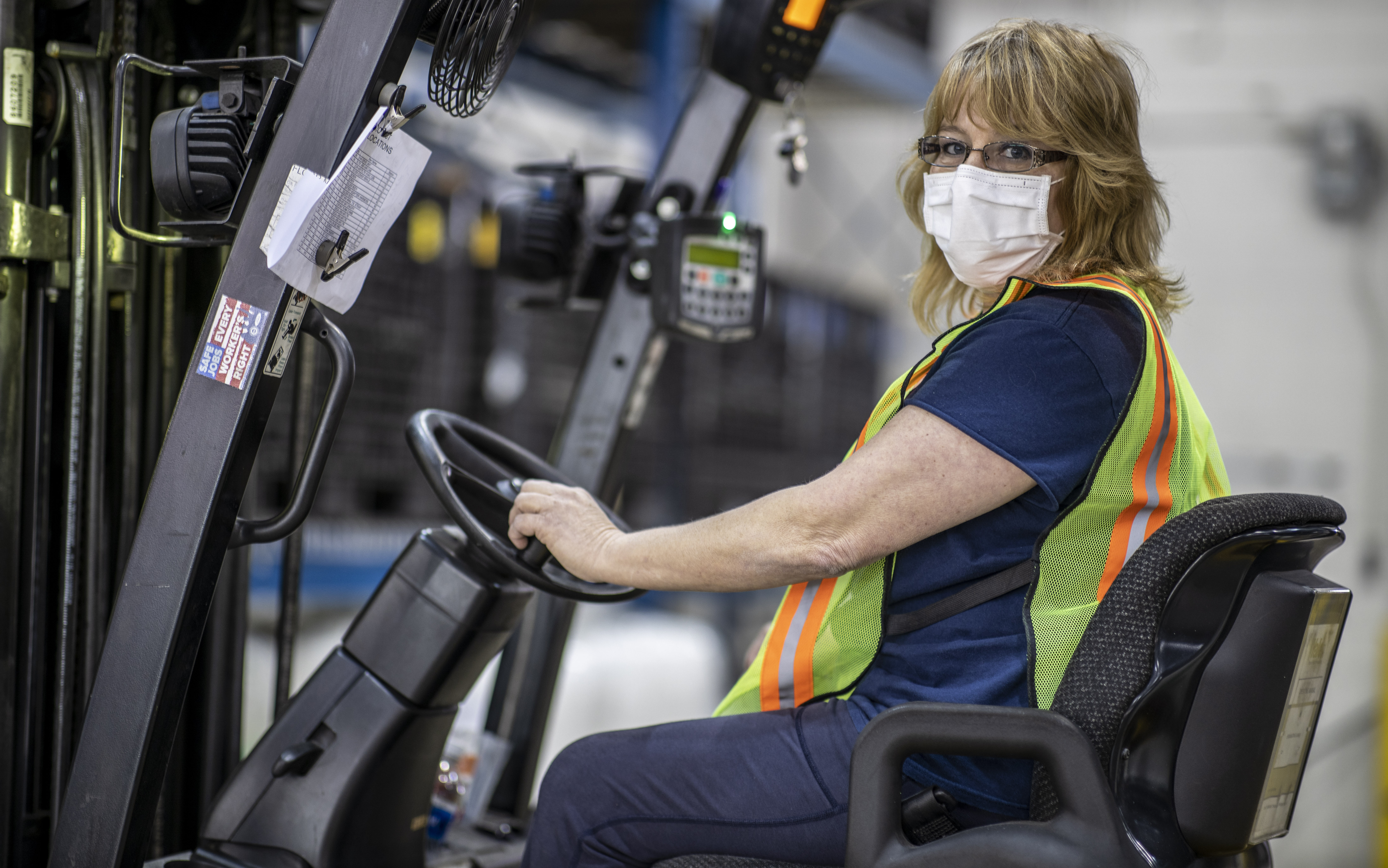 DETROIT — Cindy Parkhurst could have stayed home collecting most of her pay while the Ford plant where she normally works remains closed due to coronavirus fears.

Instead, she along with hundreds of workers at Ford, General Motors, Toyota and other companies has gone back to work to make face shields, surgical masks and ventilators in a wartime-like effort to stem shortages of protective gear and equipment.

“I didn’t give it a second thought,” said Parkhurst, 55, a tow motor driver who is now helping Ford and its partner 3M manufacture and ship respirators. “It’s a neat thing to do for the community, for the first responders who definitely need this kind of protective gear.”

All over the country, blue-collar and salaried workers have raised their hands to make medical equipment as companies repurpose factories to answer calls for help from beleaguered nurses, doctors and paramedics who are treating patients with the highly contagious virus. Workers also are making soap and hand sanitizer, which early in the crisis were in short supply.

At Ford, over 800 people returned to work at four Detroit-area sites. General Motors, which President Donald Trump had alternately criticized and praised for its work, has about 400 at a now-closed transmission plant in suburban Detroit and an electronics factory in Kokomo, Indiana, working on shields and ventilators. About 60 Toyota workers, both salaried and blue-collar, are making protective equipment in Kentucky, Texas, Michigan and Alabama.

Most automakers in the U.S. temporarily stopped making vehicles about a month ago after workers complained about the risks of infection at the factories. Many white-collar workers are being paid to work remotely but members of the United Auto Workers who don't have that option are still collecting pay and unemployment benefits that equal about 95% of regular take-home wages.

Those workers making medical gear will get their full base pay, but that's not what's motivating them to keep coming to the factories. Many simply want to help.

Jody Barrowman has been making face masks at a repurposed former General Motors transmission factory near Detroit since early April.

“Instead of being home and not helpful, I thought I’d be productive here," she said.

She jumped at the chance to work because GM is donating the masks to hospitals and first responders “which is where it needs to go,” she said.

Barrowman said that the operation has been so efficient that workers have been allowed to take masks home for family members.

“I dropped some off at my grandparents. My parents took a full packet of masks at my house. So, it’s not just helping the first responders. It’s helping me and my family feel safe,” she said.

Inside a building on Toyota’s giant factory complex in Georgetown, Kentucky, mechanical engineer Kirk Barber helps to ship thousands of face shields that workers are making while plants are shut down. Sometimes he personally delivers boxes to hospitals or the state government, which is distributing them.

All of the workers, he said, had to undergo a cultural change to make sure they stay more than 6 feet apart to protect themselves from possible contagion.

“It’s a hard habit to break when you’re typically up and talking to someone, pointing to a document,” Barber said. “People are very quick to point out ‘hey, you guys need to keep your distance.’”

Twenty-four UAW members have already died from COVID-19 but it’s unclear when or where they contracted the disease. Ford, GM and Toyota said they aren’t aware of any infections among workers who returned to make medical gear. Still, there's no denying the risks are likely higher at the factories than in the safety of one's home.

Joseph Holt, associate professor at Notre Dame’s business school who specializes in ethics and leadership, said the workers and their companies are examples of business doing its best to quickly fill a critical unmet need.

“Courage is doing what you think is right even when it might cost you,” Holt said. “Those workers being willing to go in to work to produce the medical equipment and personal protective gear, even at personal risk — that is moral courage in action.”

General Motors and Ventec Life Systems are partnering to convert the GM Kokomo, Indiana ERC building for the production of Ventec ventilators in response to the COVID-19 pandemic. (GM)

The Detroit automakers are trying to restart production on their vehicles, perhaps as soon as early May, but both Ford and GM say medical gear production will continue. Ford says it has enough workers to do both while GM says it won’t need all factory workers right away because it plans a gradual restart.

Back at the Ford complex in Flat Rock, Michigan, where Parkhurst works, she’s hoping the respirators she’s helping to ship make their way to the hospital in nearby Dearborn, where nurses treated her mother with compassion before she died of a stroke about a year ago. She knows they must be “going through hell” now because the Detroit area one of the national hotspots for the virus.

“When I compared that to taking maybe a small risk and going in and making respirators, I feel all right,” she said.