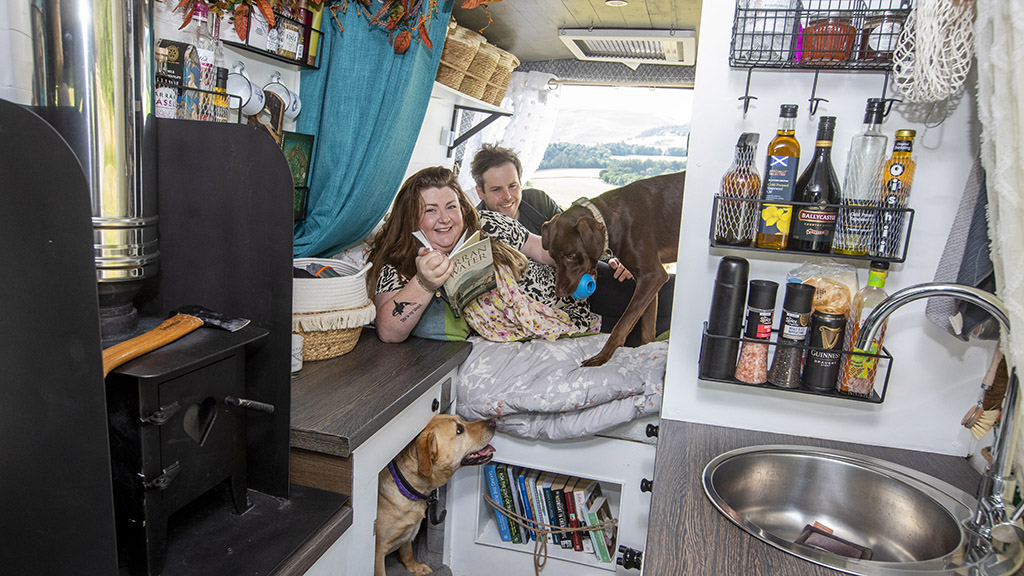 This couple decided to give up their dream house to live in a van.

MacDonald told SWNS the house was historic and included a ballroom and double-roomed basement, but ultimately, it was too big for the couple.

"It was a dream house when we bought it, but we never settled," MacDonald told the news agency. "We both decided to move on from the house as it was too big."

MacDonald said that at first, she and Ross didn’t know where they wanted to move. Eventually, they thought about living a more nomadic lifestyle.

Victoria MacDonald, 28, and Scott Ross, 32, sold their dream home to move into a renovated van with their two dogs earlier this year.  (SWNS)

"We came up with the idea of moving into a van and taking our work on the road," MacDonald said. "So that's exactly what we did."

"It was horrible. I've made no secret of the fact I did not enjoy the conversion process," MacDonald said. "It took a couple of weeks planning, but no matter how much you plan for it, you don't find out how much is needed to be done until you're right in the thick of it."

Now, their van has a Swedish oven, solar panels, a full kitchen including a fridge and storage for food and a solar shower.

TOP STARTUP IDEAS FOR ENTREPRENEURS OF ALL AGES TO MAKE MONEY

Around the same time that they bought their dream house, both MacDonald and Ross had significant career changes.

At the time, MacDonald was suffering from depression while she worked as a purchasing administrator in the oil and gas industry, while Ross was working in grounds operations for a heliport company before he was injured while on the job.

Victoria MacDonald and Scott Ross’ former home in Cruden Bay, Aberdeenshire. Just three days after they put the house on the market, it was sold for about $197,756.85. (SWNS)

After they left their jobs, they decided to start a blog about their love of travel, which turned into an online marketing travel company and eventually led to jobs with VisitScotland, according to SWNS.

"I was ill with depression, so I left my work, and around that same time, Scott injured his back so required to take leave," MacDonald told SWNS. "During our time away from work, we came up with the idea for the website and the blog, and just went for it."

Now, their van has a Swedish oven, solar panels, a full kitchen including a fridge and storage for food and a solar shower. (SWNS)

"Our friends were not surprised and our family was the same, no one was massively surprised," MacDonald added. "We haven't done the nine to five life for years now."

Now that they’re living in a van and traveling around Scotland with their two dogs Colle and Callie, MacDonald said she and Ross are doing much better and their dogs love the lifestyle.

MacDonald told SWNS: "We have not missed or regretted selling the house since we got on the road." (SWNS)

"I was on antidepressants for four years and now I've been off them since we started our new life," MacDonald said. "Scott's back is getting stronger, due to the amount of exercise he is getting every day."

"There's something about being so ingrained into nature," she added. "I wake up every day to an unbelievable view out my window… We have not missed or regretted selling the house since we got on the road."