For some, gaining wealth is easy, but maintaining it is hard. That’s not the case for the billionaire "Oracle of Omaha" Warren Buffett, who has been able to maintain his status as one of America’s richest men in the world for decades.

With years of investing experience under his belt as chairman and chief executive officer of Berkshire Hathaway Inc., there are numerous achievements the world knows about Buffett. FOX Business takes a look at five top facts you should be aware of with this legendary business figure.

In 1962, Buffett began buying stock in Massachusetts-based textile manufacturer Berkshire Hathaway Inc. He purchased 2,000 shares at $7.50 per share, which reportedly was the equivalent to a minority stake of $15,000.

Berkshire Hathaway holds a variety of impressive businesses, GEICO, Fruit of the Loom, Dairy Queen, Benjamin Moore, Duracell and numerous other companies as subsidiaries. In May 2018, Berkshire Hathaway announced it bought millions of shares in Apple during the first quarter, which ultimately made it the third-largest shareholder.

Today, Berkshire Hathaway reported $247.5 billion in total revenue for the fiscal year of 2018, according to data compiled from the New York Stock Exchange. It also reported the current market cap is around $524.2 billion at the time of this article.

Before Amazon CEO Jeff Bezos acquired the Washington Post, Buffett had invested in the Washington Post Company through Berkshire Hathaway and was indirectly the largest stakeholder, according to a report from Investopedia. He was also a member of the board of directors until stepping down in 2011.

Two other notable companies Buffett was a director of include Gillette and Coca-Cola from 1989 to the early- to mid-2000s—proving his prowess with consumer goods. He is currently Coke's largest shareholder.

Amid the financial crisis and amid the recovery that followed, Buffett invested $5 billion in Goldman Sachs and $3 billion in General Electric in 2008, and then $5 billion in Bank of America in 2011.

Buffett has made considerable donations to philanthropic efforts since becoming a billionaire. In June 2006, The New York Times reported that Buffett announced he planned to donate 85 percent of his wealth–$37.4 billion in Berkshire Hathaway stock–at that time to charitable foundations. Notably about $31 billion was said to go to the Gates Foundation.

In a joint venture with Bill Gates, he and Buffett launched The Giving Pledge in 2010, which is an initiative that encourages the world's billionaires to dedicate the majority of their wealth to charity. Over time, Buffett has upped his pledge and says he will donate more than 99 percent of his wealth during his lifetime or death.

USA Today reported in 2017 that Buffett had given away $27.54 billion in the previous ten years. In the summer of 2019, Buffett donated $3.6 billion to five philanthropic foundations.

Buffett is no stranger when it comes to the political sphere. In 2003, he joined forces with Arnold Schwarzenegger to support the actor’s bid for California governor. He even became an economic adviser, according to The Guardian. A year later, Buffett moved on to serve as an economic adviser to John Kerry during the 2004 presidential campaign.

When it comes to other campaigns Buffett has supported, the Center for Responsive Politics’ campaign finance tracker Open Secrets showed that Buffett has donated to 104 Democratic and 11 Republican campaigns at the time of this article. 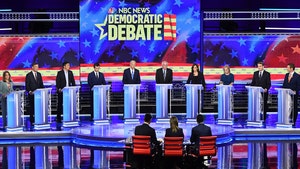 2020 Democratic donor scramble: These are the candidates with the most people shelling out cash

In order to qualify for the September debate, candidates had to poll & have enough supporters willing to shell out the dough.

On Feb. 15, 2011, Buffett received a Presidential Medal of Freedom from President Barack Obama. Six months after that, The New York Times published Buffett’s op-ed titled "Stop Coddling the Super-Rich.” In that piece, he called for Congress to increase taxes on Americans who earned more than $1 million. This philosophy later became known as the Buffett Rule and was a part of a tax plan proposed by Obama that year.

In May 2018, Buffett told FOX Business’ Liz Claman that money saved from the Trump administration’s tax cuts are being reinvested into Berkshire Hathaway’s numerous businesses. ”It was a huge change and a very important expense,” he said.

Buffett has been involved with business since his early teens. In 1944, he filed his first tax return for the income he earned from newspaper routes. After graduating from Columbia University in his early 20s, Buffett went on to work for his father’s investment firm, Buffett-Falk, & Co., as an investment salesman in 1951, according to The Motley Fool.

By 1954, Buffett snagged a job as a security analyst at the Graham-Newman Corporation investment firm, which was owned by his self-proclaimed idol Benjamin Graham—who was an American investor, economist and professor most known as the “father of value investing.” Two years later, he started his own investment firm and became a general partner in Buffett Partnership, Ltd.

Outside of business, Buffett confirmed through a press release that he was diagnosed with stage one prostate cancer in April 2012. However, he told FOX Business at the time that he wouldn’t let his diagnosis impact his duties. “You don’t have to worry at all because I’m not worried,” he said.

Today, Buffett still lives in the same home he purchased in Omaha for $31,500 in 1958, according to Investopedia.