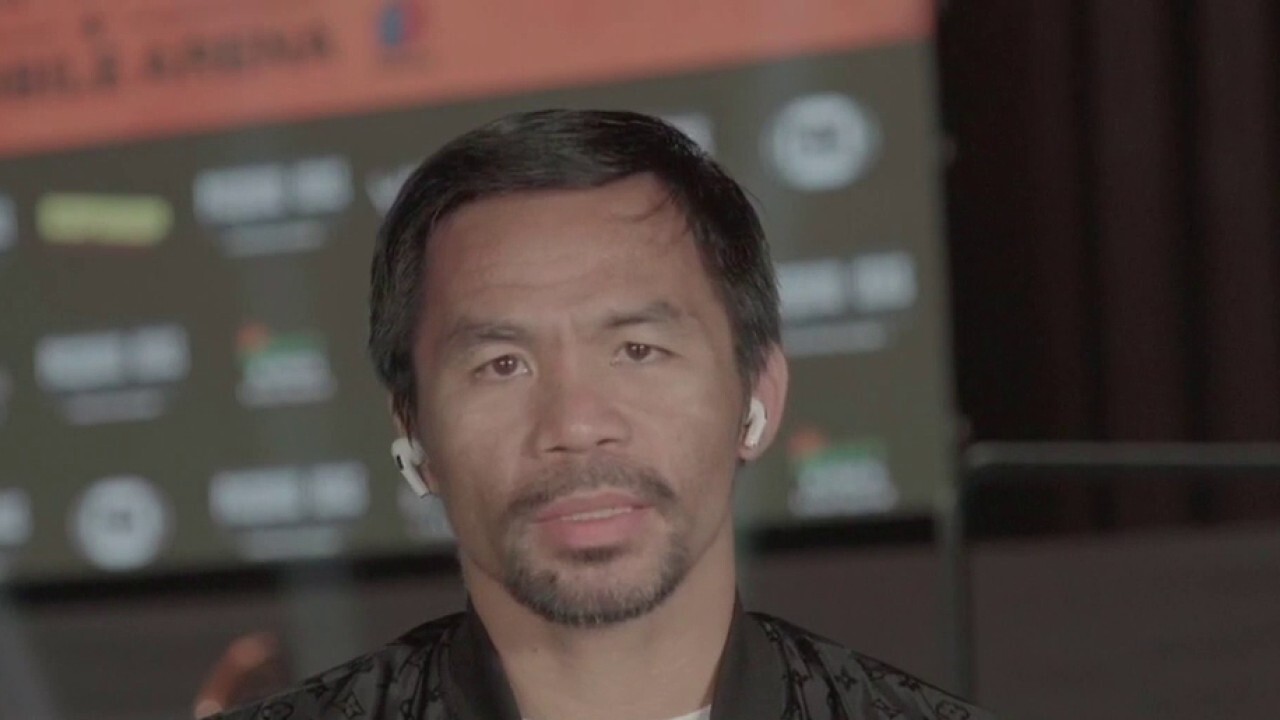 Manny Pacquiao is heading back into the boxing ring

Charlie Gasparino discusses his interview with Pacquiao, the significance of this championship and Pacquiao's involvement in politics on 'The Claman Countdown'

Boxing legend Manny Pacquiao may or may not retire after his fight this Saturday against Yordenis Ugás, he told FOX Business this week. But his nascent career as a politician in his home country of the Philippines has just begun — and it will likely include a run against the country’s current president Rodrigo Duterte, a onetime friend he now considers a corrupt foe.

That was the upshot of his wide-ranging interview with FOX Business, in which Pacquiao, 43 years old and worth an estimated $220 million, also discussed his various entrepreneurial efforts.

On top of boxing and his duties as a senator back home, he’s backing products such as a hydrogen-infused water called NXTLVL that helps athletes recover from intense workouts and a new digital coin known as the Pac Token.

But what appears to be animating Pacquiao the most these days is politics, and he strongly hinted that he will challenge Duterte for the highest office in his country, win, lose or draw in Saturday’s fight.

Pacquiao added the president’s program isn’t working, saying: "There's no dynamic growth and development in our country… The people [are] suffering, our country is suffering because there is very systemic corruption in our country."

For years, Pacquiao had been an ardent supporter of Duterte; today he is an ardent critic. Even as he gives interviews about boxing or his various business ventures, Pacquiao almost doesn’t seem to miss an opportunity to bash Duterte and what he believes is the current’s administration’s "corruption," which he said is the root cause of the country’s entrenched poverty — as much as 17% of the Philippines' 17.6 million people live below the poverty line.

Pacquiao's attacks haven’t gone unnoticed by Duterte, who recently called Pacquiao "punch drunk." The back-and-forth appears to be a setting stage for the mother-of-all-fights next year over who gets to run the country.

"I have no vested interest in politics, I just want to serve the people and protect the people. I don't like corruption," he added. "That's all I hate, I really hate corruption …  because of corruption we don't have economic growth and development."

Before he runs for president, Pacquiao, an eight-time world champion, has a fight on Saturday against Yordenis Ugás, a 35-year-old journeyman from Cuba with a record of 24-6.

It could be his last fight, Pacquiao said, or maybe not.

"My plan… is just one at a time. Let's finish this and if there’s fight, if there are more, there is more," he told FOX Business. "But it could be, this is my last fight or there is more I don't know. I mean, I have another job that I need to focus on."

And that other job is politics, plus his various entrepreneurial ventures. Pacquiao knows boxing is an unforgiving sport. Many of its best have retired broke, scammed by unscrupulous managers or just victims of their own reckless lifestyles, something Pacquiao said he was smart and fortunate enough to avoid.

"Since when I was started in boxing, [I was] earning money … because that's my heart desire," he said. "Not everybody can be like Manny Pacquiao or a successful fighter. Sometimes, most of the time, they fail to become champion."