Jared Goff is now one of the most expensive players in NFL history, but the fallout from his new contract is anything but guaranteed, especially when it comes to guaranteed money.

Goff’s new contract is a sign of his impact on the Los Angeles Rams, who tacked on four years and $134 million to his existing rookie deal. The surprising part is the $110 million in guaranteed, the most guaranteed money ever in NFL history.

While it isn’t the highest percentage of guaranteed money ever given out in a contract – a number of players have fully guaranteed contracts – the number is large and carries some risk.

Jeff Diamond thinks the Rams did a good job in wrapping up Goff long-term, even if they had to pay a premium. A former president of the Minnesota Vikings and general manager of the Tennessee Titans, Diamond said there’s certainly a roll of the dice but one worth taking for the Rams.

SUSTAINABLE BEER CUPS AT THE STADIUM: WILL IT SPIKE PRICES?
ORACLE'S LOWER-TIER TENNIS TOUR OFFERS YOUNG US PLAYERS A NEW PATH TO THE PROS

“Of course it’s a calculated risk, as all player contracts are,” Diamond told FOX Business. “But the Rams are paying the going rate for their franchise quarterback who has been a Pro Bowler the past two seasons and was a Super Bowl quarterback last year.”

Last year in his third NFL season, Goff threw for 4,688 yards with 32 touchdowns and 12 interceptions. He made his second career Pro Bowl and took the Rams to the Super Bowl.

As for the overall size and scope of the deal, Diamond thinks it is on par with other quarterbacks around the league.

This past summer, the Philadelphia Eagles signed their young quarterback Carson Wentz to a four-year, $128 million contract that tacks on to the existing two years of his rookie contract.  Wentz, who was on pace two years ago for an MVP caliber season before a season-ending injury, is primed for a big 2019 season.The Goff deal falls in line with what the Eagles did with their star quarterback. 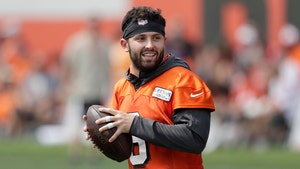 Cleveland Browns quarterback Baker Mayfield has the top selling jersey of preseason, one of two Browns stars to make the list.

“It is slightly higher than the Carson Wentz deal, which is $154 mil over six years, and Wentz’s new money was $128 million over four years, so Goff’s deal is slightly above Wentz’s,” Diamond said.

“And Goff’s new money of $134 million over four [years] or $33.5 million per year is below Russell Wilson’s new money in his recently signed deal, which was $35 mil per year. So it appears the Goff extension is very much in line with what I would have expected.”

And the trickle down might hit other players, such as Dallas Cowboys quarterback Dak Prescott, who likely will be negotiating a new contract next offseason.

"I think Dak Prescott will receive similar new money when he is extended by the Cowboys," Diamond said.