The reputation of CBD is growing like a weed — literally.

And investors across the globe are looking to cash in on the cannabis-derived chemical. However, there’s very little research and very little oversight.

CANNABIS COMPANY CALIVA SAYS ITS TEAMED UP WITH JAY-Z, TAPS HIM AS CHIEF BRAND STRATEGIST
CALIFORNIA GREENHOUSES GROWING POT LIKE A WEED, US AGRICULTURE SECRETARY SAYS

FOX Business took a tour of Canopy Growth, one of the world’s largest legal marijuana companies. Its newly-appointed leader said it welcomes regulation.

“There are people selling tons of CBD products all over America right now, all over the world right now,” said Canopy Growth CEO Mark Zekulin. “So … they have a real incentive to put a system in place to make sure that what you're buying is properly labeled, has been tested produced to a certain standard.”

One study showed that 70 percent of CBD products sold online were mislabeled.

Meanwhile, bipartisan legislation garnered support from lawmakers on Wednesday to remove marijuana from the Schedule 1 classifications labeled by the Controlled Substances Act, which equates it with ecstasy, heroin and LSD. 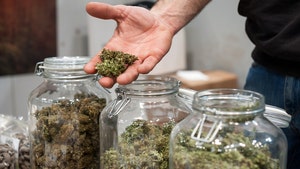 The U.S. Committee on the Judiciary heard arguments from experts who support the legalization of cannabis.

The marijuana plant contains more than 100 cannabinoids, but the most popular and useful to medicine are one cannabidiol (CBD) and tetrahydrocannabinol (THC), the substance primarily responsible for psychoactive effects. CBD is used medicinally to treat the symptoms associated with a wide variety of disorders and diseases, including inflammation, without psychoactive effects -- in other words, it doesn’t get you high.

“Think about all these sources of CBD coming into your body -- is that safe?” he said. “I, as a doctor, don't have an answer, but I err on the side of caution and say that is not ideal. We need some sort of regulation."