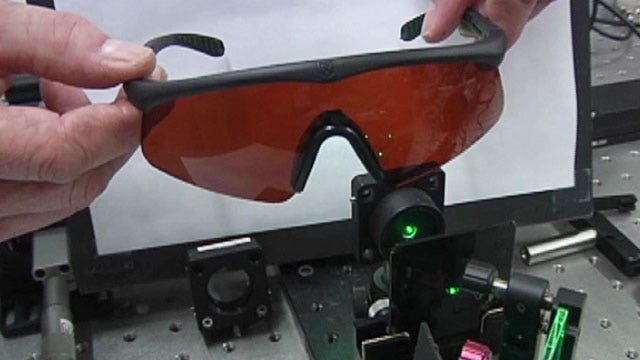 New eyewear technology may alert soldiers to threats before they can see them.

Scientists and doctors are partnering with the military, developing eye armor that goes beyond protection.

Today, soldiers use four separate lenses that protect them from debris, sunlight and different colored lasers. Army research scientist Brian Kimball says that the current system means soldiers have to switch out lenses with each changing environment. In high-action or stress situations soldiers are less likely to switch out lenses and may leave them off altogether.

Kimball says in the future troops may only need to use one lens with multiple capabilities. "The main issue with our research is we would like to be able to combine all of those functions into a single lens. So that the soldier doesn't have to take them on and off."

Innovators are developing eyewear that can alert soldiers to threats and share sensory information through the lens. "For example, a laser that's outside the visual range ... we will know where that laser is coming from. We will know that we are being lased even though we can't see the laser," says Kimball. He also says they are developing eyewear that can provide information through the lens that expands the soldiers sensory abilities, alerting them to sounds and smells before they can sense them.

Other developments include lenses that have a pixelated response system that darken a portion of the lens when pointed light is directed towards the pupil. Kimball says this reactionary technology provides a platform for other advancements.  "When we can consider the way that it adapts, sensing the environment, we can also consider other technologies or other sensory information that we can provide through the lens."

Some compare this type of display technology to Google glass, but Kimball says that their research is different and focuses more on protection and light management.

Kimball says that as eyewear technology improves, more soldiers are likely to use their eye armor and keep their eyes intact. "We really haven't done as much with eye wear as I think we possibly can."

Researchers and soldiers agree that the main priority with any lens is that the soldiers wear them. “The most important thing is for soldiers to wear their eyewear because the eyes are so easily damaged,” Kimball says.