Oil prices are likely to rise after an attack on a Saudi oil facility, another headwind for the global economy that could tip it into a recession, S&P Global Platts analysts said.

The U.S. has blamed Iran, while Iran denied involvement in the attack.

The price per barrel is likely to push into the high $70s, the analysts said. A barrel of oil went for $54.82 as of Friday.

"The events in Saudi Arabia have ratcheted up tensions in the Middle East to a new level raising concerns about supply security,” said Chris Midgley, global head of analytics for S&P Global Platts.

S&P Global Platts expects Saudi Arabia to be able to maintain supply in the short term by using reserves, but their analysts are watching out for any sign that production will be hurt long-term.

“Price could move higher if Saudi production is confirmed to be curtailed for a more substantial period which is not our current assumption," Midgley said.

White House counselor Kellyanne Conway said on “Fox News Sunday” that the U.S. is ready to tap its Strategic Petroleum Reserve, used only for emergencies, to stabilize supply in the oil market. 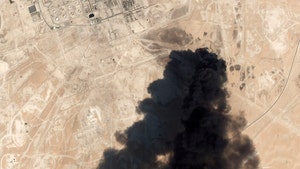 White House counselor Kellyanne Conway said the U.S. is ready to sell some of its Strategic Petroleum Reserve to stabilize global energy markets.

The Strategic Petroleum Reserve held 644.8 million barrels of crude in Texas and Louisiana as of Friday, according to the Department of Energy.

An image obtained by Fox News showed U.S. satellite images of the attacks.

The attack Saturday on Saudi Arabia's Abqaiq plant and its Khurais oil field led to the interruption of an estimated 5.7 million barrels of the kingdom's crude oil production per day, equivalent to more than 5% of the world's daily supply.