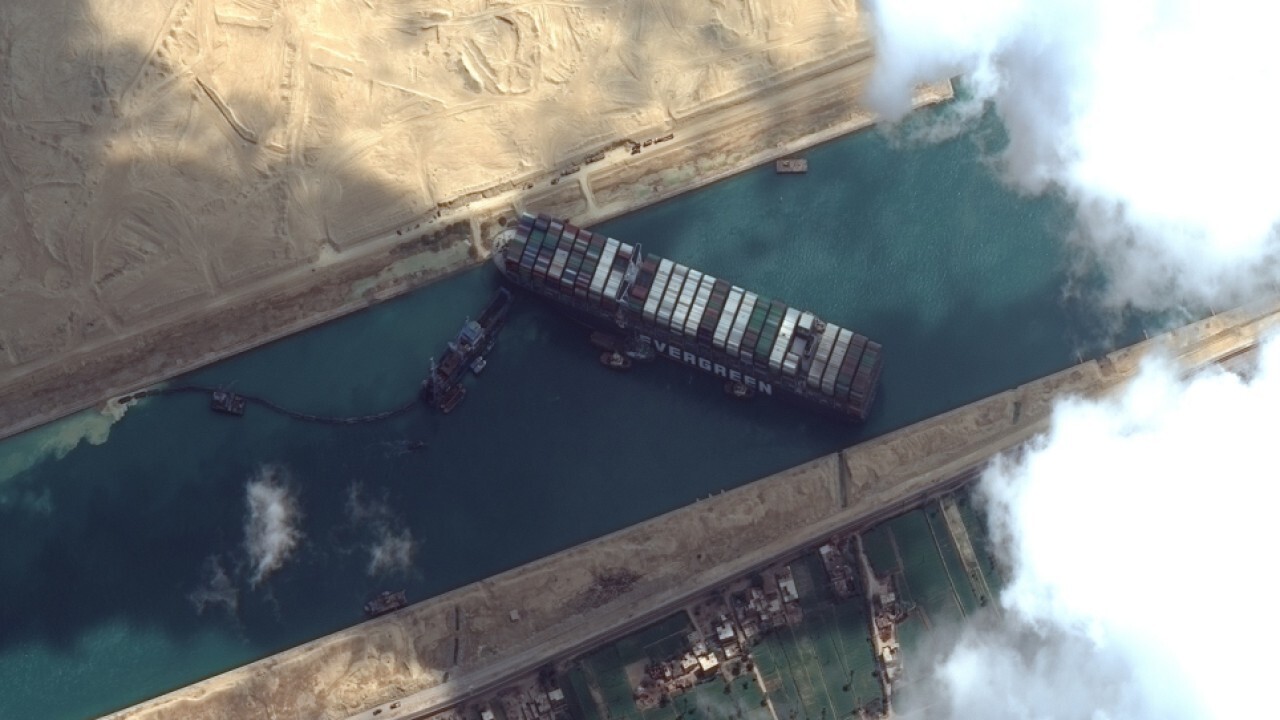 Before slamming into the bank of the Suez Canal last week and triggering a global cargo traffic jam, the Ever Given had another serious maritime accident two years ago in Germany.

The 1,300-foot container ship, operated then and now by Taiwan shipping giant Evergreen Group, crashed into a small ferry in 2019, triggering a criminal probe, which ultimately didn’t find fault with the bigger ship’s captain.

The ship, its current captain and crew and Egyptian pilots who boarded the vessel and helped guide it through the canal are all under scrutiny. Early Tuesday, the Ever Given, one of the world’s largest vessels, became wedged across the canal, blocking traffic and triggering a round-the-clock effort to refloat it.

EVER GIVEN, CONTAINER SHIP STUCK IN SUEZ CANAL, 'PARTIALLY REFLOATED'

The Ever Given’s owner, Japan’s Shoei Kisen Kaisha Ltd., and its operator, Evergreen, didn’t respond to requests for comment Sunday. Evergreen has cited wind as a factor, and Shoei Kisen has apologized for the accident. They have said they are making every effort to free the Ever Given.

Egyptian authorities are investigating the incident and have said that high winds were likely a factor. They are also looking at possible human error or mechanical failure. Investigators have highlighted what is known as “bank effects,” which can pull or push a large ship close to shore when it is navigating in a shallow, narrow channel.

Yiannis Sgouras, a Greek tanker captain who has passed through the canal at least two dozen times, said typically two local pilots come aboard to advise the master of the ship, who retains ultimate responsibility. “Suez is difficult and still gives me the creeps,” Capt. Sgouras said. During windy gusts, “you really have to keep her steady. If you accidentally turn one degree you can lose her.”

He said the probe was a joint investigation between Egypt, Taiwan and the International Maritime Organization, an agency of the United Nations.

Investigators will examine the ship’s safety record, including recent inspections of its engine and steering gear such as its rudder.

The Ever Given’s previous accident isn’t likely to have any bearing on the current probe. Still, it is unusual for a ship of such size to have two significant incidents so close in time. The Ever Given’s owner and operator didn’t respond to requests for comment regarding the 2019 collision.

On Feb. 9, 2019, the Ever Given ran into the 75-foot Finkenwerder, a pleasure ferry that was moored alongside a pontoon along the Elbe River in a suburb of Hamburg, Germany. The Ever Given, which had stopped at Hamburg on its way from China to Rotterdam, mangled the ferry and came close to pulling the pontoon free of the shore.

No passengers were aboard the ferry, but the skipper of the vessel was slightly injured, said Liddy Oechtering, a spokeswoman for the Hamburg Public Prosecutor’s Office.

Local police launched a criminal investigation into the actions of the Ever Given’s captain, probing a possible piloting error, Ms. Oechtering said. The investigation found no misconduct and determined the captain of the container ship had been caught by surprise by winds. Its slow speed had limited his ability to maneuver the ship away from the river’s banks, the probe found. It couldn’t be learned if the current captain of the ship was its captain when it hit the ferry.

The ship is relatively new, having been built in 2018. Since then it has been cited for minor safety infringements during routine inspections, according to European Union database Equasis. Last year, for instance, an inspection at the British port of Felixstowe found three deficiencies, including damaged pilot ladders and an incorrect oil-record book.

Costas Paris and Peter Landers contributed to this article.