Federal Reserve officials tried to temper growing fears of a near-term recession this week, after a reliable economic indicator in the U.S. pointed to an impending economic downturn, spooking investors.

On Wednesday, the spread between the 2-year and 10-year Treasury yield, which has historically preceded a recession when it turns negative, inverted, pushing markets down across the world and reigniting worries about the possibility of recession Yet economists cautioned that because other data in the U.S. showed a relatively healthy economy chugging along at a steady pace, it’s unclear whether a recession is truly imminent or not.

“I think the answer is most likely no,” former Fed Chair Janet Yellen, who headed the U.S. central bank under President Barack Obama, told FOX Business. “I think the U.S. economy has enough strength to avoid that, but the odds have clearly risen, and they’re higher than I’m frankly comfortable with.”

THESE 5 COUNTRIES ARE TEETERING ON THE BRINK OF A RECESSION
IS A RECESSION REALLY COMING? WHAT OTHER TELLTALE SIGNS ARE SHOWING

She called the inverted yield curve a “less good signal” of a recession on this occasion, suggesting that are a “number of factors” other than market expectations about the Fed’s future path of interest rates that are pushing down long-term yields.

It’s rare for short-term interest rates to go higher than long-term rates, because lenders generally require a higher interest rate to lend for longer periods of time, due to a bigger inflation risk or the increased possibility of defaulting. Generally, the yield curve inverts when markets believe there’s a recession coming and inflation will be lower, or the Fed will be forced to cut rates.

St. Louis Federal Reserve President James Bullard, a voting member of the Federal Open Market Committee, also sought to downplay the chances of a recession in the near-term, instead saying policymakers will have to wait and watch markets and incoming data.

“I think we’re in the middle of a global slowdown, and we’re just going to have to assess how this is going to affect the U.S. economy,” he told FOX Business on Thursday. 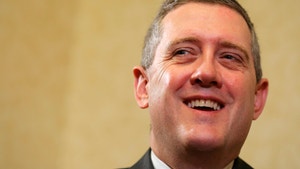 Fed's Bullard says no need to panic about stock gyrations

Despite the stock market’s recent selloff, Bullard sees no need to panic about the U.S. economy.

Bullard pointed to fundamentals like the strong labor market, low unemployment, solid consumption growth as evidence the record-long economic expansion hasn’t ended yet, but warned that uncertainty from the U.S.-China trade war and what seems to be a global slowdown could weigh on the economy.

“This is a case where, if you’re looking backward at the data it looks pretty good, but boy, you want to be taking into account what might happen going forward,” he said.

Right now, most traders are pricing in the chance of a modest 25 basis point interest rate cut at the Fed’s September meeting. Bullard declined to say whether he believed a deeper cut was necessary. Rates are currently set between 2 percent and 2.25 percent. Stocks clawed back some of their losses on Friday, although the yield curve remained inverted.