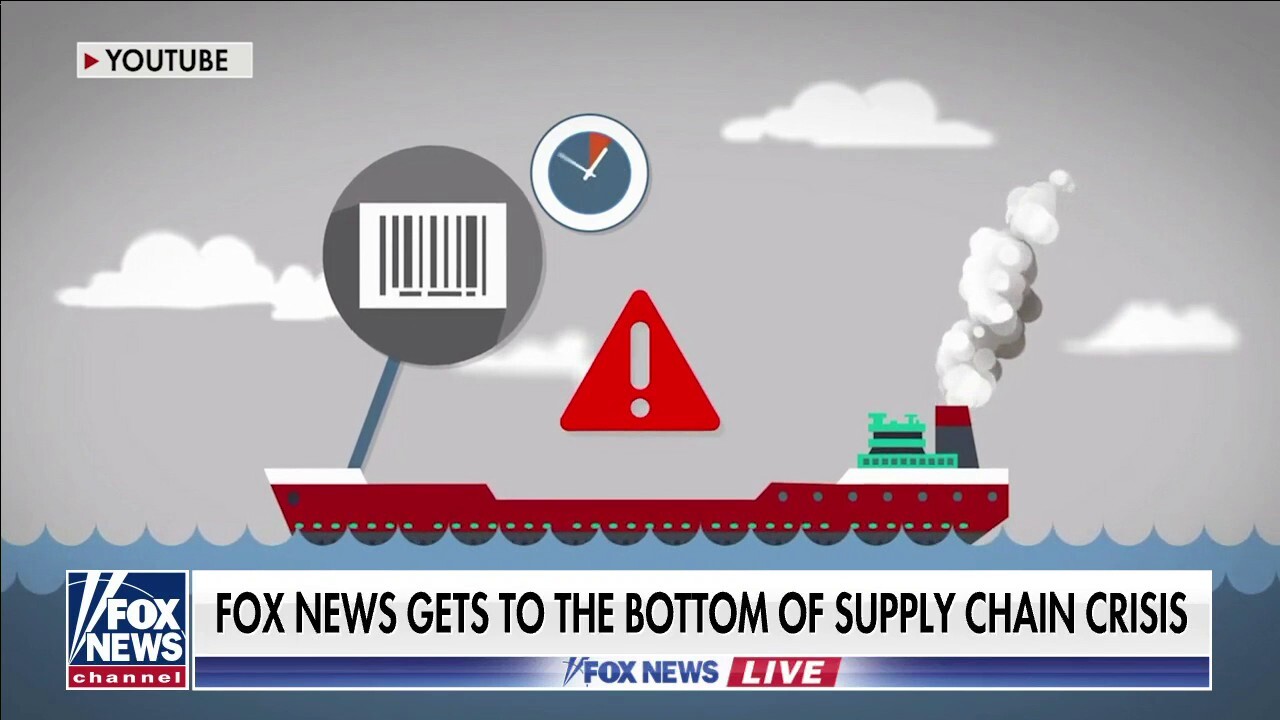 Fox News investigates how the U.S. wound up with long lines of cargo ships at ports.

The cracks on the screens of Americans' personal computer devices may be an indicator of a much larger problem in the ongoing supply chain crisis.

And the world of consumer electronics, specifically laptops, has not only been hit particularly hard during the pandemic, it's a perfect metaphor for the problems with modern-day supply chains, according to experts.

"Most of my repairs, about 20-30% of my repairs are screens, which is LCD panels," says Arthur Zilberman, the owner of LaptopMD in New York City.

A sign is seen on the shelf at a CVS store in Queens, New York.  (Lindsey Nicholson/Universal Images Group via Getty Images / Getty Images)

Zilberman has been in business several decades, and says he's never had a problem finding replacement parts like he is today, specifically replacement screens for things like cellphones and laptops.

Just this week, one company in the business of LCD-panel technology announced it would be opening a domestic repair facility for its U.S. customers "to avoid ongoing challenges in the volatile international supply chain."

When it comes to a device like a personal computer, the screen may be a very important part, but it is one of many. And that is perhaps what helps make the modern-day laptop the perfect metaphor for our current supply chain woes.

"The COVID pandemic was a wakeup call that not only tested our supply chains, but showed us that it is just not responsible to be overly dependent on China for stuff that is critical to our economic and national security."

"Something as complex as a laptop, that could be thousands of parts, hundreds of companies involved in just the making of those parts," says Michael Farlekas, whose company e2Open, helps facilitate supply chain logistics for multi-billion dollar companies.

"People have an idea that products are made in a factory... they're not," Farlekas told Fox. "They're made actually in dozens of factories, and factories that are spread around the world. So in between the factories, you have shipment cycles, which means trucks have to be loaded and delivered, and unloaded and unpacked," Farlekas continued.

He says this complex network of deliveries between supply chain "nodes" is partially what led to the backlogs of shipping containers at U.S. ports that dominated the pre-holiday new cycle. "If any one of those items is constrained, the whole process is constrained, and that's what we've seen over the past, you know, really 18 months," he explained.

According to Rep. Tom Malinowski, D-N.J., co-sponsor of the bipartisan Building Resilient Supply Chains Act, there are serious national security implications with respect to the United States’ supply chain issues.

"The COVID pandemic was a wakeup call that not only tested our supply chains, but showed us that it is just not responsible to be overly dependent on China for stuff that is critical to our economic and national security," Rep. Malinowski told Fox.

The supply chain of a laptop computer captures the complexities that created many of our modern day supply chain issues, according to experts. (Courtesy: e2Open)

"I do not want the United States to be at the mercy of an adversary like China because we're overly dependent on them for everything from, you know, PPE in a health crisis to semiconductors to the critical components of solar panels, which almost all come from China today," Rep. Malinowski added. "That's not good for our future."

That dependency is already resulting in some dire straits for small business owners like Zilberman, who is pleading with lawmakers for help. "Please work overtime, do what you need to do, but get this situation solved," Zilberman said, "because small people like me cannot hang on any longer."

Farlekas says there could be a silver lining for people like Zilberman and others, if they can hang on long enough. And as long as we learn the right lessons from our current situation.

"I think in the next four to six months, you'll see [these issues] smooth out quite a bit," Farlekas told Fox. "My focus would be on how you make the system stronger, more resilient, more agile overall. I think that will be the greatest thing that can come out of what we've seen in the last 18 months," he added.