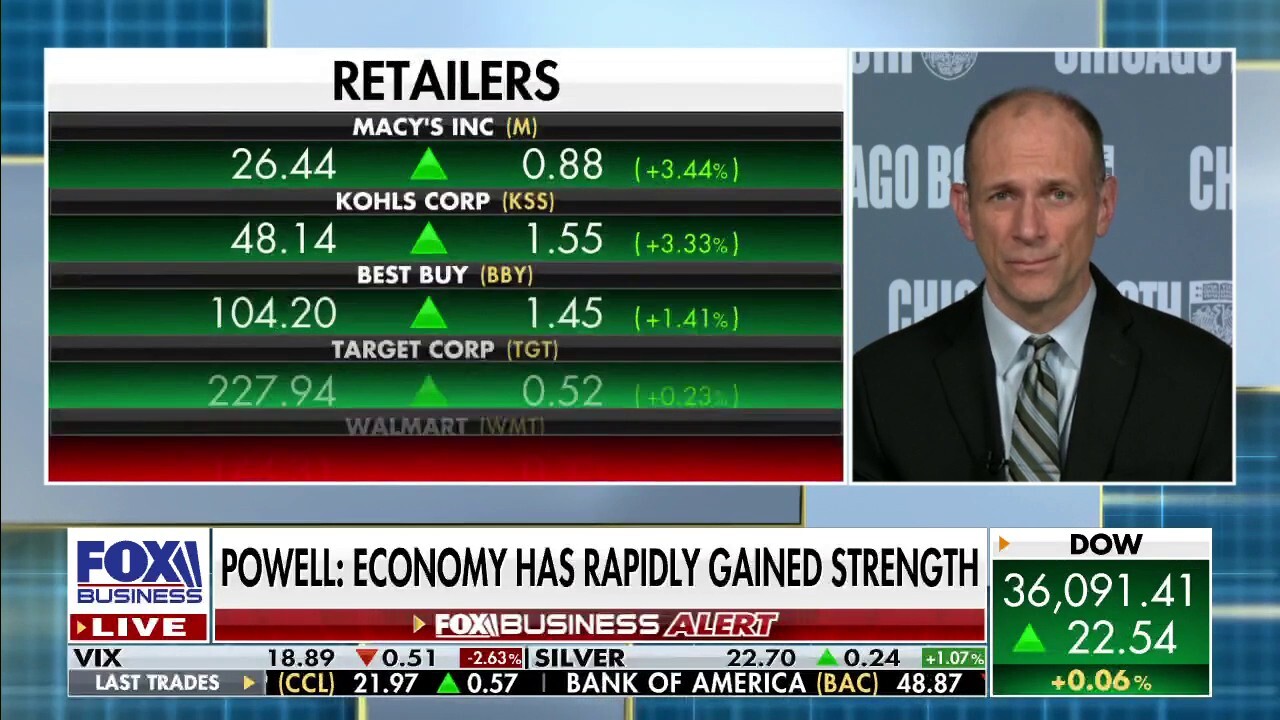 Austan Goolsbee: It could be a 'blockbuster year' for economy, pending impact of omicron

Economics professor Austan Goolsbee joined 'Cavuto: Coast to Coast' to discuss how COVID-19 could likely impact the economy this year alongside the job market and the supply chain.

The number of Americans filing for unemployment benefits unexpectedly climbed to the highest level since mid-November as an unprecedented surge in COVID-19 cases driven by the highly contagious omicron variant threatened to undermine the economy's recovery.

Figures released Thursday by the Labor Department show that applications for the week ended Jan. 8 rose to 230,000 from 207,000 a week earlier, missing the 200,000 forecast by Refinitiv analysts.

In this May 7, 2020, file photo, a flier reads "Workers Available" at the Pasadena Community Job Center during the coronavirus pandemic in Pasadena, California. (AP Photo/Damian Dovarganes / AP Newsroom)

Continuing claims, or the number of Americans who are consecutively receiving unemployment aid, fell to 1.559 million, a decrease of 194,000 from the week's previous level. It marked the lowest level for continuing claims since early March 2020, just as the pandemic began shutting down broad swaths of the economy.

Claims have largely moderated near pre-pandemic levels as the economy recovers and Americans continue traveling, shopping and eating out. Businesses have struggled to keep up with the demand, however, and have reported difficulties in onboarding new employees. Thursday's report suggests that companies are making an effort to retain the workers they already have.

The Labor Department reported earlier this month that there were 10.6 million open jobs at the end of November. Though a slight decline from October, it's still a staggeringly high figure; there are about 3.7 million more open jobs than unemployed Americans looking for work.

But there is growing unease on Capitol Hill over a stunning rise in cases driven by the highly transmissible omicron variant. The U.S. is now reporting a seven-day moving average of more than 122,000 cases.

PRODUCER PRICES SOARED BY 9.7% IN DECEMBER, BIGGEST GAIN ON RECORD

While it's still unclear what the fast-spreading variant will ultimately mean for the health of the economy, its effects on daily life have already been felt. Thousands of flights have been canceled, Broadway shows are shuttering their doors and a growing number of schools have postponed reopenings. The White House has maintained that it has the resources needed to respond to any disruptions caused by the omicron spread.

"We can’t chalk up the increase in weekly unemployment claims to omicron," said Robert Frick, corporate economist at the Navy Federal Credit Union. "The level still remains near the historical average, and while that could change in the next month, with Omicron cases expected to peak in a couple weeks, it’s unlikely any increase would last long."