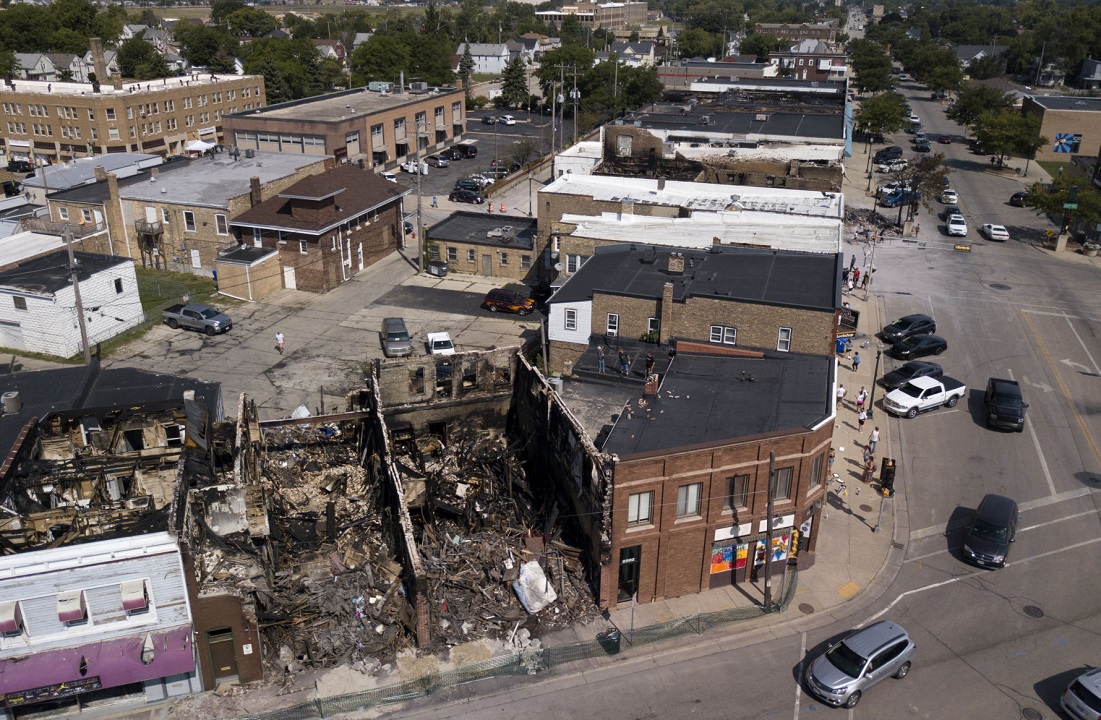 The unrest that gripped Kenosha, Wis., for several days following the police shooting of a Black man last month resulted in $50 million in damage to buildings and businesses, officials said.

To help put in perspective of just how big of a hit that is for the city with a population of nearly 100,000 residents, that makes up more than half of Kenosha's municiple budget of $86.3 million.

The damage was spread across as many as 100 businesses, including 40 that are “out-of-business for good," Kenosha County Supervisor Terry Rose said during a Tuesday county board meeting, according to the Kenosha News.

Rose called for federal and state funding to rebuild businesses and the rebuild the state corrections center or the probation and parole building that was set ablaze during the riots.

This aerial photo shows damage to businesses in Kenosha, Wis. Police in Kenosha have arrested dozens of people since a white officer shot Jacob Blake in the back. (Sean Krajacic/The Kenosha News via AP)

“The county needs to assist the city in bolstering the Uptown community,” Rose said. “We need to seek federal funds, state funds or local funds to make sure that those (police) body cameras, which we authorized in (a) prior resolution, are made very much a part of the forthcoming budget.”

Kenosha briefly became a flashpoint in the nationwide unrest over the Aug. 23 police shooting of Jacob Blake. The 27-year-old was paralyzed after being shot multiples times in the back by police officer Rusten Sheskey.

The incident set off a wave of protests, some of which turned violent. Two protesters fatally shot and another wounded by Kyle Rittenhouse, a teenager who was armed with a rifle and claimed to be protecting businesses from looters when he allegedly opened fire on the demonstrators.

At one point, 2,000 members of the National Guard were deployed to the city to quell the violence.

The burned down Department of Corrections in Kenosha, Wis. (Sean Krajacic/The Kenosha News via AP)

During the meeting, Supervisor Zach Rodriguez read comments from residents concerned about the future safety of the city. One resident was concerned about how the county would handle reactions from verdicts stemming from the unrest.

Rodriguez said he was certain most of the destruction was caused by people who live outside the community.

“To the people who burned down our city, we won’t allow it ever again,” he said.