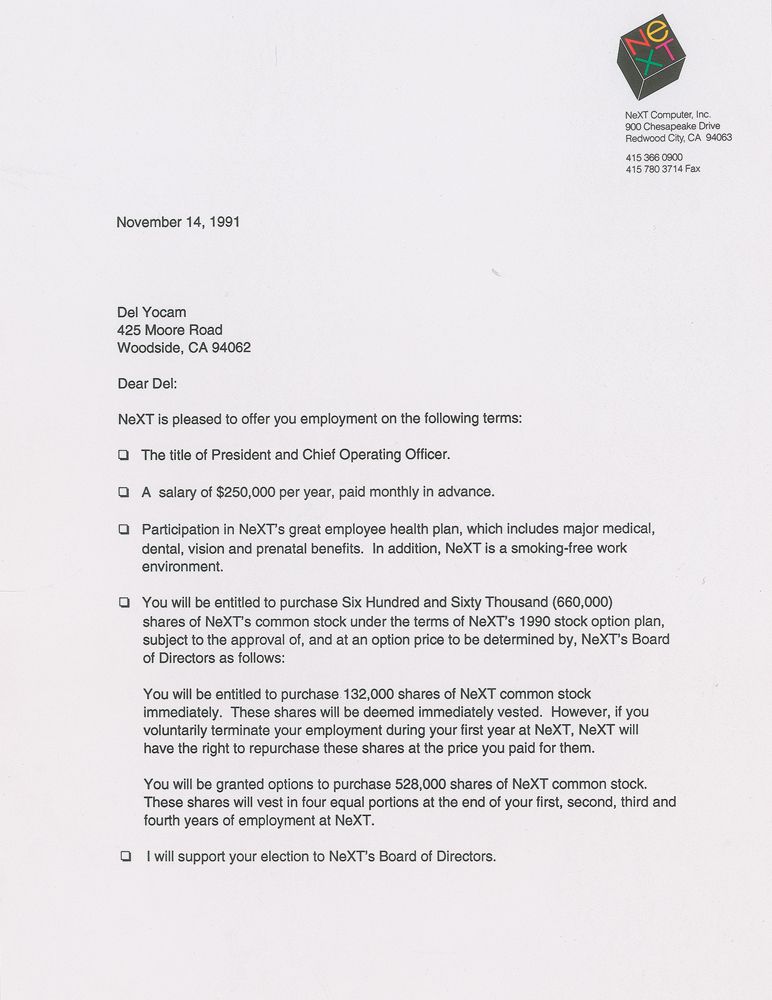 An offer letter signed by Jobs to Del Yocam offering him the position of President and Chief Operating Officer of NeXT Computer is up for auction, where it could fetch at least $25,000.

The letter, which is being handled by Boston-based RR Auctions, shows Yocam receiving a $250,000 salary, 660,000 shares of NeXT’s common stock, Jobs' endorsement to join NeXT's board of directors and other perks.

RARE APPLE 1, SIGNED BY STEVE WOZNIAK, COULD BE WORTH $400G

"Above the signature line is typed: 'I accept this insanely great offer !!!'—'insanely great' being a famous Jobs-ism used to introduce the Macintosh," RR Auctions wrote on its website.

"Letters signed by Steve Jobs are ultra-rare—we've been in business for more than 40 years, and this is the first that we have seen," said Bobby Livingston, Executive VP at RR Auction, in an email to FOX Business.

The auction will run until Dec. 17, the auction house added.

Jobs founded NeXT in 1985 after he was ousted from Apple over disagreements with the company's direction. However, he returned to Apple in 1997 after the company purchased NeXT for $429 million and 1.5 million shares of Apple stock.

Yocam, who knew Jobs from their time at Apple, never wound up joining the tech titan at NeXT, instead serving on a number of boards, including Adobe Systems and Oracle.

The offer letter is the latest piece of Apple-related memorabilia to go up for sale. Last month, RR Auctions also listed a rare Apple I computer signed by Apple co-founder Steve Wozniak for sale, an item that could sell for more than $400,000.

Jobs, Wozniak and Ron Wayne co-founded Apple in 1977. Nearly 50 years later, the company is the world's most valuable, with a market cap over $2 trillion.