WWE had a big debut on FOX Friday.

Its first SmackDown broadcast on the network drew 3.9 million viewers when streaming views and the Spanish broadcast were added, to kick off a five-year, $1 billion deal.

The big premiere reached its target audience, with a 1.4 rating among the highly-coveted 18-49 demographic – twice the number of the second-highest show in that age group that night, “Hawaii Five-O” on CBS.

“The show had those kind of big moments that you want out of a debut,” said Dave Meltzer of the Wrestling Observer Newsletter. “Wrestling is getting very interesting and changing by the week. The FOX launch combined with bringing Cain Velasquez and Tyson Fury into WWE were major moves that are shaking things up.” 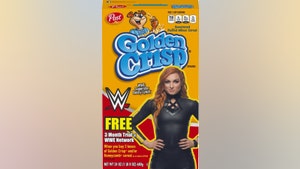 Post’s deal to feature WWE superstars Becky Lynch and Big Show on cereal boxes marked a fresh start in the wrestling world for a company that once got slammed in court by one of the sport’s biggest stars.

The cable side is a shaping up to be a battle royale, as the WWE’s Wednesday broadcasts of NXT on USA Network, are battling with the new All Elite Wrestling (AEW), which airs on TNT. Both shows air from 8 to 10 p.m. Eastern time.

This week, “Dynamite” suffered a significant drop to 1.018 million viewers, but it still came in a bit higher than the 790,000 viewers for “NXT,” which nearly doubled its viewers in one week.

The reason that the numbers are there, as experts say, is that it is programming that draws in a specific audience.

“It does well with young men, and advertisers want to reach them on television,” media consultant Brad Adgate, who worked in the advertising industry. “You’re getting them off of video games and watching YouTube, and you can get them in front of a TV set for an hour, that could be very financially lucrative because of who the target audience is. If you can get a man 12-to-24 or 12-to-34 watching that week in and week out, there’s a long list of advertisers that want to reach them.”

AEW was founded this year, with backing from Jacksonville Jaguars owner Shahid Khan – the lead investor of this endeavor - and his son Tony, who was named the founder, president and CEO of the company. Professional wrestlers Cody Rhodes, as well as Matt Jackson and Nick Jackson, who are known as The Elite are the promotion's inaugural contracted talents. The trio is serving as both in-ring performers and executive vice presidents alongside Kenny Omega, fellow professional wrestler and co-founder of The Elite.

HOW NBA'S CHINA WOES COULD HURT PLAYER PAY AND WHO YOU SEE ON YOUR FAVORITE TEAMS
NIKE INFLUENCING NBA'S HANDLING OF CHINA: JASON WHITLOCK
RAYS WIN ON THE FIELD, AND THEY NEED ONE OFF OF IT TO ENSURE FUTURE IN TAMPA BAY

“AEW and NXT are in a great battle every week,” said Meltzer. "The big thing is that both companies and brands are motivated to give people the best matches possible because this is a battle of who is going to present the best matches with the best atmosphere."

The big ratings numbers for the multiple WWE events and the upstart AEW show the past two weeks show one thing that could benefit both the established WWE and its challenger.

“Any time you have competition, it creates news around it, the phrase ‘rising tide lifts all boats,’ comes to mind,” said Alan Wolk, co-founder and lead analyst at TVREV.

“Wrestling’s been having a comeback and, then, this new AEW, they seem to be getting the younger fans, that’s (Khan’s) goal. WWE, at some level, is still quite popular. Its audience may be older, but they’re still watching it; they’re not going anywhere. At its heyday, wresting had a much bigger audience (Saturday Night’s Main Event drew an 11.6 rating in the 1980s on NBC), so clearly there’s still room for growth.”

When the partnership between the AEW and TNT was announced, they took a veiled shot at the WWE, saying their brand mission would be to offer a product that’s "less scripted, soapy drama, and more athleticism and real sports analytics, bringing a legitimacy to wrestling...Wrestlers will also be given more freedom to explore their characters and highlight their athletic abilities."

The AEW also promised innovations such as "introducing statistics to wrestling for the first time ever," which includes "tracking each competitor's wins and losses as the wrestlers pursue championships, analyzing their moves, assessing damage to their opponents, and providing insights into their winning streaks."

WWE’s flagship show, “Raw” still airs on Monday nights – and it drew a 2.5 rating for its Sept. 30 broadcast - and it used to broadcast “SmackDown” as well before FOX swooped in with the huge deal.

“WWE’s been around a long time, it’s going to be hard for (AEW) to make any inroads,’ says Adgate. “It could make a go of it, but it’s going to take a while, invest in it, promote it, and get some talented people that will resonate with viewers. They can make a dent in it, but WWE’s pretty long-running and established. They have a great heritage with it, but wrestling’s wrestling.”

NXT started as a revamped feeder system, basically minor league wrestling promotion, for WWE. Their weekly series used to air on Wednesday nights on the streaming service, WWE Network. It was moved to USA when their drama series “Suits” ended its long run.