The Washington Nationals’ surprise run to a 2-0 lead in the 2019 World Series this fall should provide a boost to the franchise’s long-delayed bid to land a lucrative naming rights deal for the team's stadium, Nationals Park, according to a sponsorship expert.

Nationals Park has operated without a naming rights deal since it opened its doors in 2008. Team executives sought a sponsor when the stadium was under construction in 2006 and again in 2016, but negotiations did not yield a suitable offer.

Naming rights deals can be a key source of revenue for sports teams, with high-end agreements generating as much as $20 million annually for franchises over a period often stretching for a decade or longer. While a World Series victory would not guarantee the Nationals a top-dollar deal, it could bring corporate partners interested in national exposure back to the table, according to Gemini Sports Group President Rob Yowell, who was involved in the franchise’s initial naming rights talks. 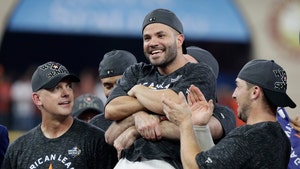 The Astros spent their entire five-decade history in the National League until 2011, when Houston-area businessman Jim Crane led a group of investors to purchase the team for a reported price of $680 million.

“If I’m the Nationals, it’s certainly a great time to be having those types of conversations, first and foremost with your current partners, if anybody wants to elevate themselves above the clutter and become the most prominent partner of a World Series champion or the National League pennant winners,” Yowell told FOX Business.

The Nationals are one of just nine MLB teams without a corporate naming rights partner for their stadium. Most of the holdouts, such as the Boston Red Sox’s Fenway Park or the Chicago Cubs’ Wrigley Field, have stadiums known as historic sites in baseball circles.

For franchises who manage to cash in on a deal, the payoff can be massive. Citigroup agreed in 2006 to pay the New York Mets $20 million per year over a 15-year period to headline at Citi Field.

While the Nationals drew strong early demand from sponsors before Nationals Park opened its doors, negotiations stalled after management set a top-of-the-market price tag for a deal. At the time, the Nationals had just relocated from their stint as the Montreal Expos, a franchise that had failed to sustain competitive play.

“There was obviously lots of speculation and discussion of the type of partner they wanted and certainly what the price was and I know there was lots of interest in that building back in the early days, before the park opened,” Yowell said. “I think there was — I won’t call it unrealistic — but they had a very high value of what they thought they were going to get.”

For corporate sponsors considering a stadium sponsorship, the price is just one consideration. Companies have to consider if the team’s market is a good fit for their brand and if ownership will keep the franchise’s brand strong over the 20-year period typically required to secure a naming rights deal in a major U.S. sports league.

Some international companies — such as those based in China — could balk at the notion of buying naming rights for a stadium in a politically fraught city like Washington, D.C.

Regardless of whether the Nationals close out their World Series battle with the Houston Astros with a title, a run to the championship should yield more national television exposure next season — increasing the potential value of its stadium in terms of brand exposure.

But to land a deal, the Nationals would have to sell a partner on the notion that their success is sustainable.

“Certainly being a World Series champ means a lot, but it doesn’t guarantee you anything down the road,” Yowell said. “What you hope is that you’re selling the overall experience, the overall relationship, the commitment of your ownership and front office to build a perennial winning organization that’s going to be strong in the community.”