Amazon Prime VP on Tropical Storm Barry: We are prepared

Amazon Prime Vice President Cem Sibay addresses concerns about the potential impact of Tropical Storm Barry on the company's fulfillment centers near the Gulf of Mexico.

Amazon centers in the path of Tropical Storm Barry are preparing for the ensuing storm’s landfall, expected the weekend before the company’s biggest shopping day.

FOX Business reached out to the company for specifics on their plans for both employees and customers who may be effected by the storm.

At least one Amazon distribution center in Baton Rouge, Louisiana is expected to take a direct hit from the storm.

While the company doesn’t release it’s profits from Prime Day, it expects another record-breaking year. Some experts predict more than $4 billion in sales for the two-day event this year.

Barry is expected to effect millions of people once it makes landfall and brings heavy rains to the already flood-ravaged Midwest.

President Donald Trump declared a federal declaration of emergency for Louisiana ahead of landfall. The Department of Homeland Security and Federal Emergency Management Agency are coordinating disaster-relief efforts after the state’s governer requested additional federal resources.

We are anticipating a category 1 hurricane at landfall which at this time we believe will be Saturday morning… obviously there will be updates between now and then and everyone needs to pay attention to… the track… this is going to be a major weather event for a huge portion of the state of Louisiana.

The United States Postal Serviced announced the closure of a number of locations due to mandatory evacuations:

Operations for the closed locations were moved to a neighboring location ahead of landfall. 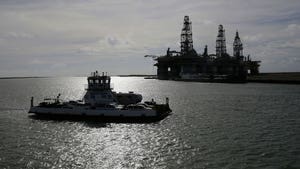 U.S. oil producers in the Gulf of Mexico have cut more than half their output because of a Tropical Storm Barry,