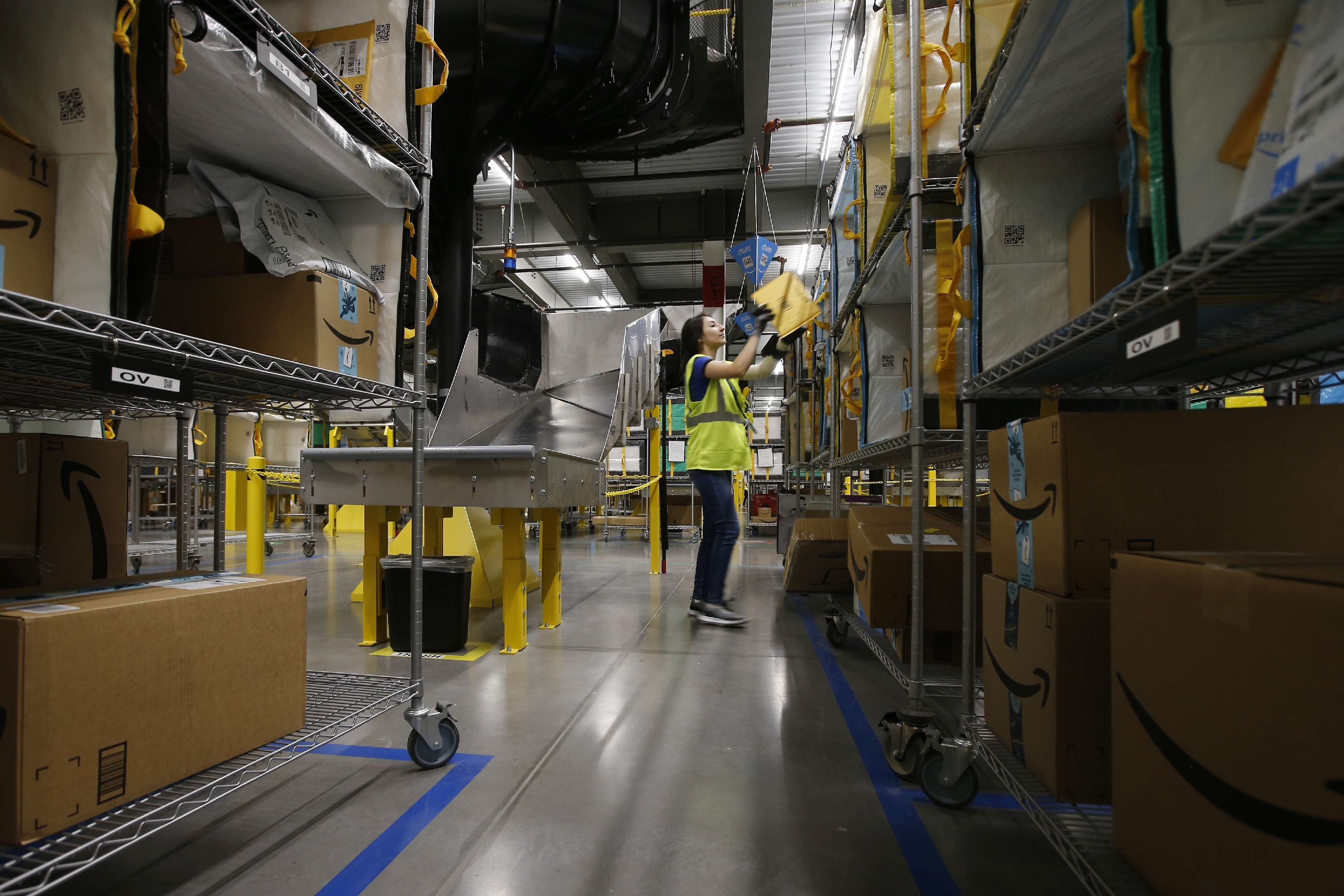 Deborah Liljegren joined Amazon.com Inc. in April as it raced to add warehouse workers to keep up with soaring demand from homebound shoppers. Seven months later, her days are only getting busier.

“The peak season has started,” Ms. Liljegren, 49 years old, said of the holidays. “It has been more exhausting than ever.”

Ms. Liljegren is a stower at Amazon’s fulfillment center in Kenosha, Wis., where she helps organize items that go into packages. She took the position after being laid off from her accounting job at an advertising firm in March, a shift that has taken her from performing clerical duties in an office to working a fast-paced, physically demanding position inside the one-million-square-foot Amazon facility. Warehouse jobs at Amazon typically start at $15 an hour.

Early on she spent her days sorting Lysol wipes, pet food and home-organizing products. Lately, cleaning products have given way to Christmas decorations. This year’s holiday rush started early, partly because Amazon shifted its Prime Day sales event from July to October due to the pandemic.

Here’s a look at a typical peak-season day for Ms. Liljegren, whose schedule recently increased from 40 hours a week to as many as 55 hours due to the holiday rush:

3:15 a.m: Ms. Liljegren wakes up, packs her lunch and leaves her home in Lake Geneva around 4:50 a.m. to make the roughly 30-mile drive to the Kenosha warehouse.

5:30 a.m: Arriving at work, Ms. Liljegren puts on her mask and receives a temperature check. Amazon has thermal cameras at its warehouses and says employees with fevers are sent home. As she begins to walk through the facility, a staff member behind plexiglass gives Ms. Liljegren a thumbs-up to indicate a passed temperature check.

HERE'S WHAT YOU SHOULD KNOW ABOUT AMAZON'S NEW PHARMACY BUSINESS

5:45 a.m: Ms. Liljegren checks in at her work station, which has a screen that shows information about the items she is stowing. At the outset of the shift, the screen displays Covid-19 safety reminders and updates on company policies. Ms. Liljegren is mostly by herself all day in a roughly 10-foot-long area where she takes hundreds of items an hour from containers and stows them inside tall shelves. The shelves move around using robotic devices, stopping in front of Ms. Liljegren when she needs to stow items. Her job is essential in making sure products are correctly organized so that they can quickly be placed into packages.

9:35 a.m: After a 20-minute break in which she smokes a cigarette and eats a snack, she is back at her station. In the break room, tables are spread out to keep employees distanced. Amazon allows staff to remove their masks only while eating. Some facilities also have physical barriers between tables. Walking lanes keep people from crossing paths.

11:30 a.m: During her 30-minute lunch break, Ms. Liljegren typically eats a sandwich and a cup of Cheetos inside her red Ford Focus. Eating in her car gives her a break from the various coronavirus protocols at the facility and provides some quiet respite from the constant noises inside. “I like to have a few minutes to myself,” she said.

When she lost her previous job, Ms. Liljegren figured it would take a long time for the economy to stabilize, so she looked for a surefire position in the meantime. The transition from a white-collar job to blue-collar one “has been a totally different experience,” she said.

12 p.m: Ms. Liljegren begins the second half of her shift. As the seasons have changed, so have the items she sorts. When the school year was approaching, she sorted lots of crayons, textbooks and file folders. Lately, her containers are filling with lights, Christmas decorations, and gift items such as TV mounts and greeting cards.

2:45 p.m: Ms. Liljegren has another 20-minute break. Amazon closely monitors worker productivity by tracking how many items workers stow or package an hour.

5:15 p.m: Ms. Liljegren signs off and wipes her station with cleaning spray. On a typical shift, she may sort more than 2,000 items. She’s back home at about 6 p.m., her next shift roughly 12 hours away.