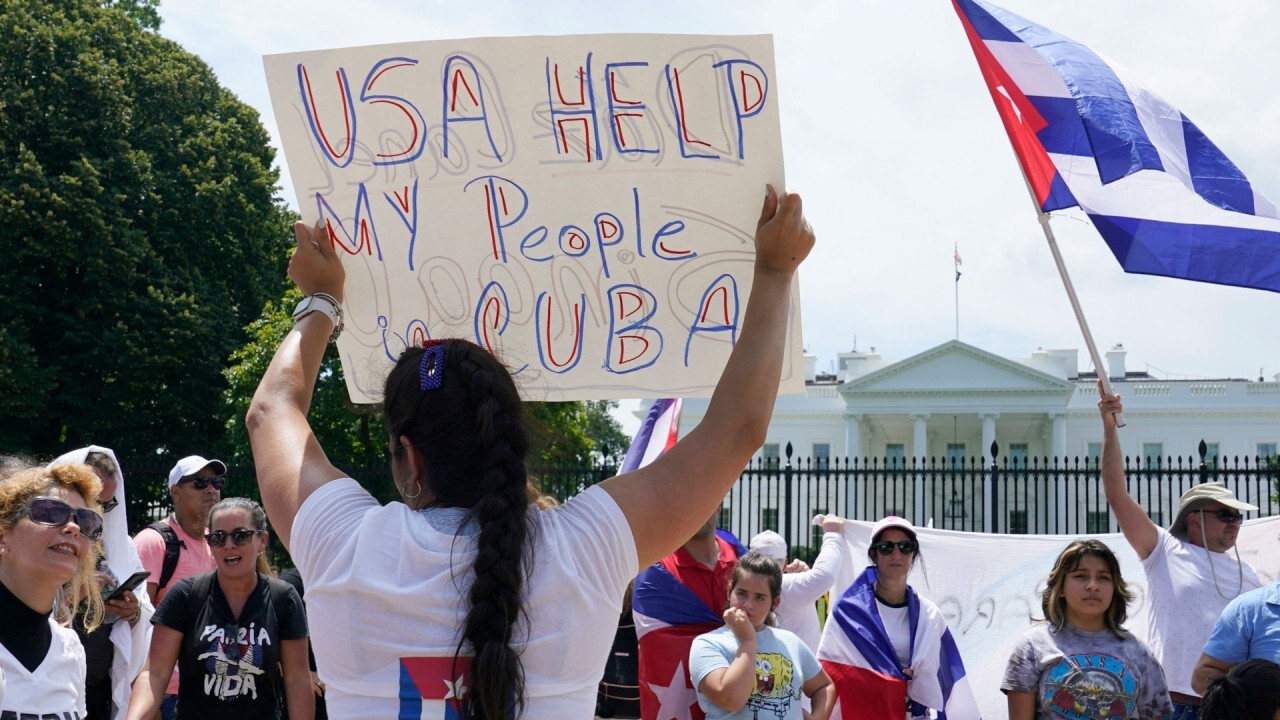 Protesters call on Biden to intervene in Cuba

Rep. Maria Salazar, R-FL, addresses the Biden administration's lack of intervention in Cuba and turning on the internet for the Cuban people.

The Biden administration announced new sanctions on Friday against Cuba's national revolutionary police and its top two officials as the U.S. looks to increase pressure on the communist government following this month's protests on the island.

The Police Nacional Revolcionaria and the agency's director and deputy director, Oscar Callejas Valcarce and Eddie Sierra Arias, were targeted in the latest sanctions announced by the Treasury Department's Office of Foreign Assets Control. The police are part of Cuba's interior ministry, which was already the subject of a blanket designation by the Trump administration back in January.

"We hear the cries of freedom coming from the island. The United States is taking concerted action to bolster the cause of the Cuban people," President Joe Biden said at the start of a White House meeting with Cuban Americans not long after Treasury announced the sanctions.

The administration says it is considering a wide range of additional options in response to the protests, including providing internet access to Cubans, and has created a working group to review U.S. remittance policy to ensure that more of the money that Cuban Americans send home makes it directly into the hands of their families without the government taking a cut. Biden added that more sanctions were in the offing.

The White House meeting comes almost three weeks after unusual July 11 protests in which thousands of Cubans took to the streets in Havana and other cities to protest shortages, power outages and government policies. They were the first such protests since the 1990s.

The Cuban regime deployed the PNR to attack protesters, the Treasury Department said in a statement. The police were photographed confronting and arresting protesters in Havana, including members of the Movement of July 11 Mothers, a group founded to organize families of the imprisoned and disappeared, according to Treasury.

In Camagüey, a Catholic priest was beaten and arrested by the PNR while he was defending young protesters, according to Treasury. PNR officers also beat a group of peaceful demonstrators, including several minors, and there have also been documented instances in which the PNR used clubs to break up peaceful protests across Cuba, Treasury said.

"The Treasury Department will continue to designate and call out by name those who facilitate the Cuban regime’s involvement in serious human rights abuse," said Andrea Gacki, director of the Office of Foreign Assets Control. "Today’s action serves to further hold accountable those responsible for suppressing the Cuban people’s calls for freedom and respect for human rights."

Among the Cuban American activists meeting with Biden was Yotuel Romero, one of the authors of the song "Patria y vida!" which has become a kind of anthem for the protests, said an official.

White House officials said Biden would discuss the new sanctions as well as ways to potentially establish internet access for the Cuban people.

People participate in a rally outside the White House in Washington, Tuesday, July 13, 2021, in support of the protesters in Cuba. (AP Photo/Susan Walsh / AP Newsroom)

Internet access is a sensitive issue in Cuba. In the days before the recent protests, there were calls on social media for anti-government demonstrations. Cuba's government said anti-Castro groups in the United States have used social media, particularly Twitter, to campaign against it and blamed Twitter for doing nothing to stop it.

Internet service was cut off at one point during the July 11 protest, though Cuban authorities have not explicitly acknowledged that they did it.

Some U.S. leaders, including Florida Gov. Ron DeSantis, have said the White House should do something to maintain internet service in Cuba, including using balloons as Wi-Fi access points for the population.

The Biden administration is also considering proposals put forward by U.S. advocates of trade with Cuba that would restore ways for Cuban-Americans to send money to relatives on the island.

Biden and others have rejected the outright restoration of remittances because of a percentage fee of the transaction paid to the government. But under one proposal being considered, the transfer agents would waive that fee until the end of the year, according to proponents.

The proposal would have to be cleared by the Cuban government, however, and it is not at all clear it would agree.

Last week, the U.S. government announced sanctions against the minister of the Cuban armed forces, Álvaro López Miera, and the Special Brigade of the Ministry of the Interior — known as the "black berets" — for having participated in the arrest of protesters.

International organizations have harshly criticized the Cuban government, which has said that while people affected by the country's crisis participated in the protests there were also "criminals" who took advantage of the situation to create disturbances. At times, the protests turned into vandalism with looting, robbery and confrontations with the police.

Government sympathizers also took to the streets to defend the authorities and the revolution.

So far it is unclear how many people were detained, although the judicial authorities have said there have been 19 trials involving 59 people.