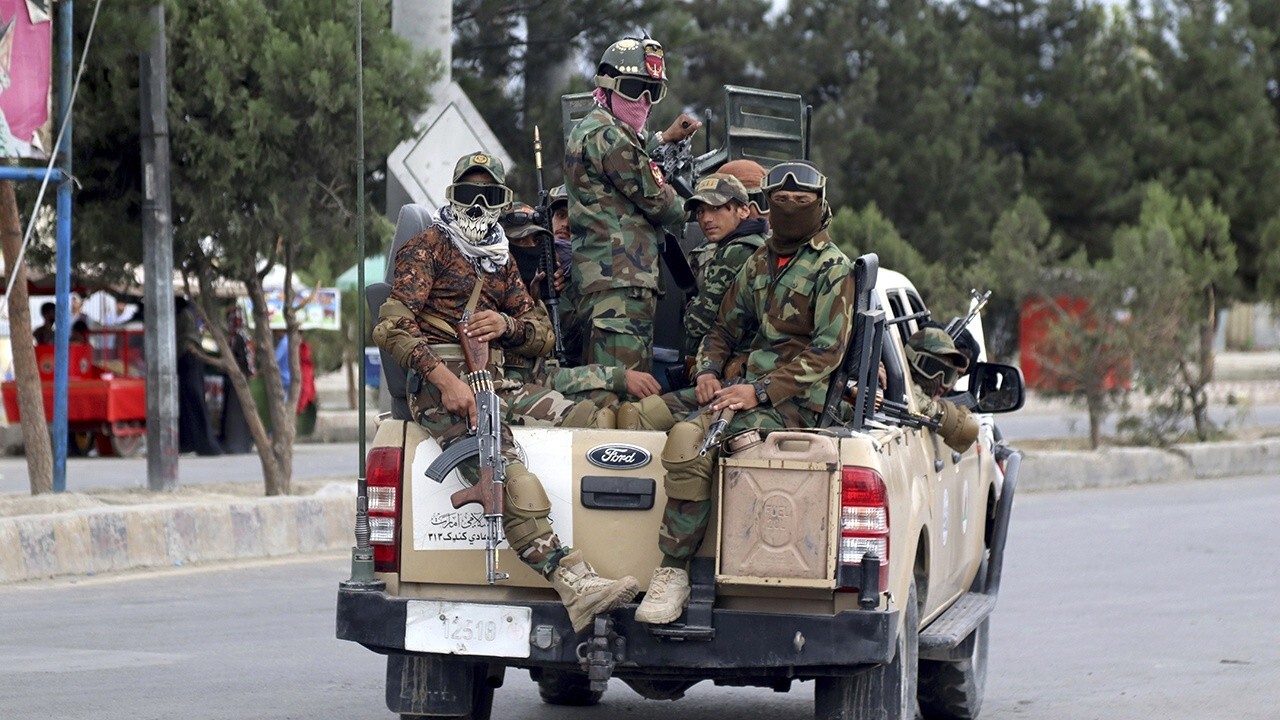 Afghanistan is heading toward a failed state: Gen. Keane

Gen. Jack Keane (Ret.) warns of a possible civil war in Afghanistan after the Taliban took control of the government in late August.

While thousands of people crowded outside the main gates of the Kabul airport seeking to escape Afghanistan in August, the Central Intelligence Agency opened a back door about 2 miles away along the northern perimeter of the airfield.

Known by various code names, including Glory Gate and Liberty Gate, the airport entry, which hasn’t been previously reported, was so secret even the Taliban were unaware it existed. It was located opposite a gas station and run by CIA operatives and Delta Force and guarded by a CIA-trained Afghan paramilitary unit known as 02, who evacuated alongside the Americans in the final flights.

"The gas station was where our guys would go grab Afghans," who were seeking to leave, a former CIA operative said.

Initially, it was used to smuggle out priority cases for the CIA, including intelligence assets, local agents and their families and a list of high-importance cases sent from the White House. Later, the entrance was expanded to become the main conduit for State Department efforts in the final 48 hours of the civilian evacuation mission to help vulnerable Afghans who worked at the U.S. Embassy and others who could not make it through Taliban checkpoints blocking access to the airport.

The makeshift entrance was created out of Hesco barriers, barbed wire and concrete blast walls that were moved by forklift to provide a layer of protection to the operatives at the entrance.

The Afghans who passed through the gate, either on foot or in buses, were searched behind the blast walls, and then driven for several hundred yards along a concrete track and over a bridge into a U.S. base formerly known as Camp Alvarado, which was part of the airport complex. The CIA later opened a second secret gate along the northern perimeter. The CIA declined to comment. The CIA’s role in operating the gate was described by current and former U.S. officials, along with nonprofits involved in evacuation efforts. The State Department declined to comment on the role of the CIA.

John Bass, a former U.S. ambassador to Afghanistan who was chosen to lead the evacuation effort, described the difficulty working with the Taliban, and dealing with huge crowds of desperate people all seeking to reach the airport through a handful of chokepoints.

The State Department had arranged for Americans and permanent residents to enter the airport on buses on a road that cut through the nearby interior ministry, a process that required crossing Taliban checkpoints. An effort to bring in Afghans through the same route ran into obstacles after the Taliban demanded manifests of names, and beat and harassed those travelers.

KABUL, AFGHANISTAN - AUGUST 30: A view from the scene after at least five rockets were fired at the Afghan capital Kabul's Hamid Karzai International Airport on August 30, 2021. Local sources confirmed the rockets were fired but intercepted via defen (Photo by Haroon Sabawoon/Anadolu Agency via Getty Images)

The Glory Gate route became more active on Thursday, Aug. 26, more than a week after the Taliban took Kabul, after a State Department team negotiated an agreement with the CIA to use the passageway to evacuate U.S. Embassy staff and families in the final 48 hours of the civilian evacuation effort. U.S. Embassy staff and families were told to assemble at secret locations around the city and board buses that would take them to the airport.

The first three buses were scheduled for the morning to test whether the plan would work. Ultimately, about 40 more were expected to transit through the rest of the day and on Friday.

Abdul, who asked not to use his full name to protect his family still in Afghanistan, was among the first to make it through with his family. He worked in the U.S. Embassy’s General Services Office helping to schedule travel for U.S. diplomats. He had tried and failed several times to reach the airport with his wife, who was nine months pregnant, and their two toddler children.

His former U.S. colleagues told him there was a plan to get them in on buses. Abdul was told to head to a meeting point on the outskirts of the city and look for a bus marked as 404 M 98311 KBL. They found it, boarded and soon found themselves heading for the airport. The drive took around 30 minutes.

After passing through the secret gate, it took four or five hours to get through various checkpoints inside the airport as the family completed paperwork and underwent biometric scans. Around 2 a.m., they boarded a C-17 military aircraft along with more than 600 other people destined for Germany. His pregnant wife was given a seat, along with a handful of other pregnant or sick travelers. The rest stood for the 12-hour journey to Germany without food or water.

Sam Aronson, a political officer at the State Department, was on duty at Glory Gate on the morning of the operation. When the first buses arrived without incident, he asked if they could also start bringing in families from the street. "Just don’t blow our gate," the operator on the gate said, according to Mr. Aronson.

He called the Joint Operations Center, where the State Department and U.S. military were temporarily based inside the terminal at Kabul airport, and told them he had negotiated with the gate operators to bring in families on foot as well. Mr. Aronson’s colleagues began making calls to Afghans on a long list of people that were hoping to be evacuated and, in many cases, had appealed to aid groups, Congress, and veterans groups among others for help.

The families were given detailed instructions on how to reach the area near the CIA gate and told to wear distinctive clothing that would enable Mr. Aronson and his interpreter to identify them. He brought in 13 families for a total of 52 people on Thursday, Aug. 26, before the gate was temporarily closed that afternoon because of a warning about an attack.

Shortly after, an explosion at the airport’s crowded Abbey Gate killed 13 U.S. servicemen and women and brought evacuation efforts to a near standstill on Friday. All the main gates were closed. A trickle of American citizens and green-card holders were brought in through the road near the interior ministry. Only the CIA gates remained open for Afghans and their families. Civilian evacuations were set to end at 6 a.m. on Saturday, Aug. 28, the following morning.

By the evening, Homeira Qaderi, a celebrated female author in Kabul who had created an uproar in Afghanistan after publishing a book called "Dancing in the Mosque," had lost hope of being evacuated with her 8-year-old son. She was prepared to stay and continue to advocate for women’s rights.

But around 6:30 p.m. Friday she received a call from Mr. Aronson, who told her to leave immediately for the airport. Mr. Aronson reached the gate with Dari-speaking colleague Mustafa Popal just as the call to prayer sounded over Kabul in the evening. They confirmed that two Afghan families had linked up and were in place.

When the CIA operatives confirmed they were clear to go, Mr. Aronson flashed the light through a V-shape in his fingers while Mr. Popal went ahead to shout for them to be allowed to pass. In the confusion that followed, the Afghan soldiers protecting the CIA at the entrance fired warning shots in the air. Everyone shouted to let the families pass, and finally they made it through.

Ms. Qaderi and her son were among the last to pass through Glory Gate.