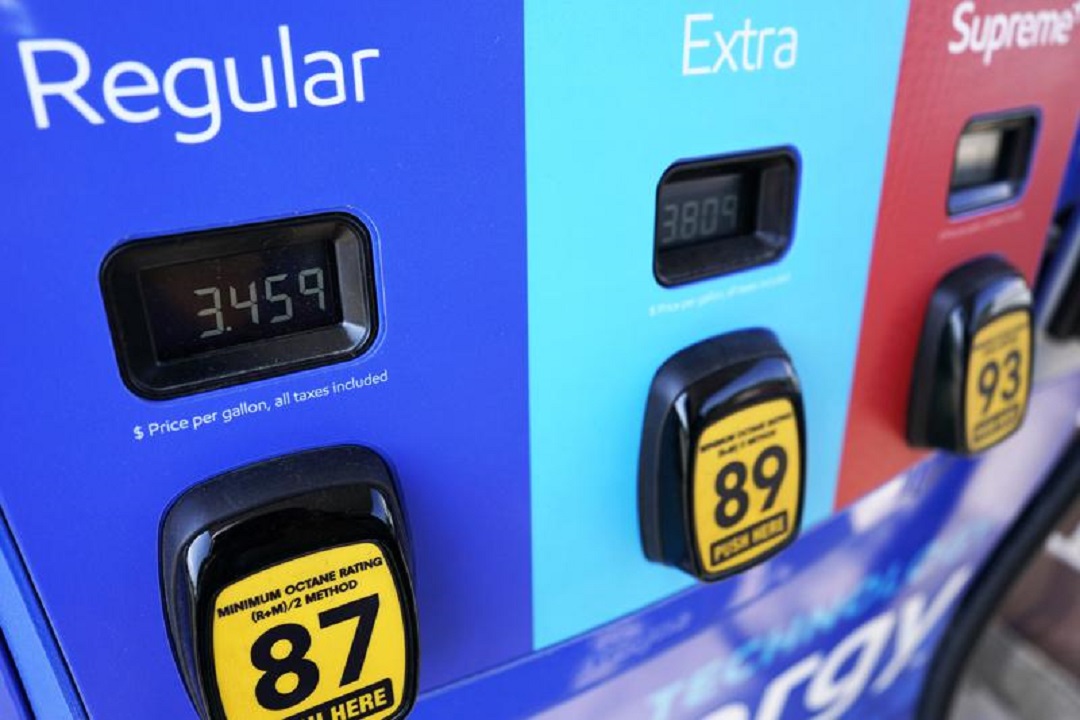 Gas prices have whizzed past $3 per gallon in much of the nation. The cost of used cars and new furniture, airline tickets, department store blouses, ground beef and a Chipotle burrito are on the rise, too.

Many economists say the price increases are fueled by the aftereffects of a global pandemic and probably won’t last. But Republicans are hoping to storm into next year’s midterm elections arguing that steep government spending under President Joe Biden and a Democratic-controlled Congress has triggered inflation that will ultimately hurt everyday Americans.

The economic reality is more complicated. Still, with Republicans only needing to pick up a handful of seats to regain the House and Senate, the party increasingly sees the prospect of sustained higher prices as a way to connect policies made in Washington with the experiences of voters whose pocketbooks may be feeling the strain.

Rep. Jim Banks, R-Ind., said his constituents have "seen the higher prices on gas in particular, but also groceries and the cost to keep their businesses running." Such voters, he said, "know, intuitively, that this is due to Democrats’ economic agenda and big spending plans."

Consumer prices rose 5% over the previous 12 months, the largest one-year increase since 2008. Excluding more volatile items such as food and energy, prices were up 3.8% over the past year -- the biggest 12-month jump since 1992.

Those leaps were driven by comparisons to the pandemic-hampered 2020 economy, but nonetheless show prices climbing sharply, with the cost of used cars rising 7.3% in May and food costs increasing nearly half a percentage point over the same period. Gas prices have risen from a nationwide average of $2.48 to $3.13 per gallon under Biden, the first time since 2014 that it has topped the $3 threshold.

Former Federal Reserve economist Claudia Sahm said this year’s inflation rates are likely to remain far higher than usual, but that’s chiefly due to the the pandemic pushing inflation uncommonly low last year. There’s also a boom in consumer spending due to pent-up demand as the virus recedes and the lingering effects of disruptions to global supply chain, she said.

An example Sahm pointed to is a virus-triggered shortage of semiconductors which has slowed production of new cars and helped used vehicle prices spike, at least temporarily.

"It is not a structural change in the economy, it is a few months," Sahm said.

Gas price is seen at a Mobil gas station in Vernon Hills, Ill., Friday, June 11, 2021. The rising cost of gasoline is being felt across the U.S., as the national average price has gone up from $2 per gallon last year to $3 per gallon as of June 9, ac ((AP Photo/Nam Y. Huh) / Associated Press)

GAS SHORTAGE: 72% OF NC GAS STATIONS ARE WITHOUT FUEL

Others are playing down the risk of price gains being sustained, because many were caused by supply bottlenecks set to ease as the post-pandemic economic recovery takes hold.

"We’re still skeptical that this signals the start of a sustained pickup in inflation, either in the U.S. or elsewhere," said Ben May director of global macro research for Oxford Economics.

Factories ramping up production are already easing some some pricing pressure. Lumber prices that skyrocketed recently are falling again. That eventually could affect everything from home-building in white-hot real estate markets around the country to the cost of a desk at Office Depot.

Republicans have nonetheless intensified warnings that inflation is surging and they blame the $1.9 trillion stimulus that congressional Democrats pushed through Congress. Charges that profligate federal spending is overheating the economy are growing louder from the right as lawmakers hammer out a sweeping infrastructure package.

Inflation jitters could end up resonating more with voters than many cultural issues Republicans raised in the opening months of Biden’s term. The president’s approval ratings have remained strong despite complaints by many Republicans about "cancel culture."

Florida Sen. Rick Scott, who is leading the GOP effort to retake the Senate, has chided Biden to "realize that reckless spending has consequences, inflation is real and America’s debt crisis is growing."

INGRAHAM: BIDEN IS OUT OF GAS, IS NOW AMERICA'S PROBLEM DENIER

Banks, the Indiana congressman who is chairman of the Republican Study Committee, is proposing long shot changes to House rules to mandate that committees report how proposed legislation will affect inflation. "We need to tie inflation to the Biden economic agenda and explain to voters how inflation is Democrats’ hidden tax on the Middle Class," Banks wrote in a recent memo to the study group’s members.

White House officials see what’s happening as a global, rather than U.S.-centric, phenomenon because ports in Hamburg, Germany, and several Chinese cities face similar challenges. This suggests that the size of the coronavirus relief federal stimulus plan mattered less for inflation than the complexity of restarting a pandemic-shocked world economy. Higher shipping costs alone could make a typical pair of jeans 29 cents more expensive or increase a refrigerator’s cost $50, the Oxford Economics analysis says.

GAS PRICES COULD HIT 99 CENTS IN SOME STATES DUE TO CORONAVIRUS AND SUPPLIES, EXPERT SAYS

The Biden administration has created a task force to address supply chains to show that they are targeting some forces behind inflation. Part of the perceived inflationary pressure is rising wages, though, and the White House sees higher incomes as a positive. It also views some inflation as a byproduct of vaccinations increasing demand for workers, goods and services.

"We’re going to keep an eye on it, but we think it should resolve in the next few months," Sameera Fazili, deputy director of the White House National Economic Council, told reporters recently.

The economy grew from January through March at a blistering 6.4% annual pace, and that could fuel further higher wages and possibly higher prices. The alternative, however, is that rising prices are simply a blip and dissipate quickly.

Betting that inflation will sway large chunks of the electorate hasn’t panned out before.

GOP concerns about inflation abounded, but amounted to little, after the 2008 financial crisis. Republicans made dramatic gains in the House during the 2010 midterms, but that election focused more on federal spending and health care than inflation.

Sahm said voters are especially attune to rising gas prices but generally "there are other things consumers care far more about."

Raising worries about inflation, meanwhile, also may simply come with the territory for one party when the other is in power.

Under President George W. Bush in August 2008, House Speaker Nancy Pelosi, D-Calif., issued a statement noting that inflation had reached a 17-year high and "threatens to devour the paychecks of hard-working Americans." Now congressional Democrats are pushing for more spending to keep the post-pandemic economy strong.

John Horn, a professor of practice in economics at Washington University in St. Louis, said inflation has occasionally helped influence midterm elections, including when Democrats made congressional gains in 1982 and 2010′s tea party-fueled Republican wave. But it hasn’t played a decisive role in politics since the gas-line-triggering energy crisis of the late 1970s.

"We haven’t dealt with this for 40 years," Horn said. "Most of the people in that 35 to 65 age range — which is the working class and asking, ‘What’s my wage and can I afford stuff?’ — don’t remember inflation."