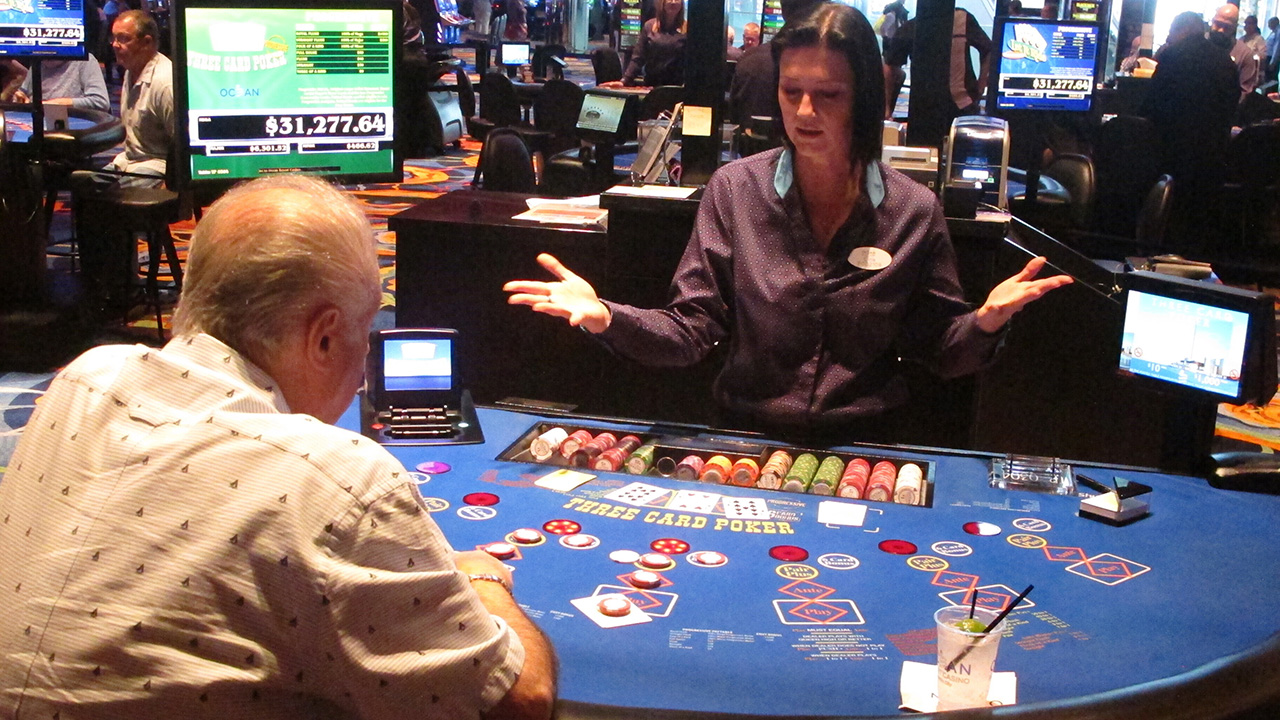 A bill that would give tax relief to Atlantic City's casinos — and possibly prevent the closure of as many as four of them — was being considered Monday in the New Jersey Legislature.

The full state Senate passed a bill making changes to an existing law enabling the nine casinos to make payments in lieu of property taxes to Atlantic City, Atlantic County and the school system.

The Assembly had not yet acted on the bill Monday night, and it remained unclear when a vote might occur.

In this Sept. 28, 2018 photo, a dealer shows that her hands are empty during a card game at the Ocean Resort Casino in Atlantic City N.J. (AP Photo/Wayne Parry)

Known as the PILOT bill, it is intended to help the casinos recover from the coronavirus pandemic by reducing large increases in such payments that would take effect if the bill is not passed.

"Failure to pass the PILOT legislation will have a further detrimental impact on the land-based casinos, which are still recovering from this unprecedented pandemic," the Casino Association of New Jersey, the casinos' trade group, said in a statement Friday. The group said the bill would bring stability and help protect 20,000 jobs, among other benefits.

The casinos would still pay more to the city, county and schools next year even if the bill passes; it just reduces the amount of the increase.

The casinos collectively expect to pay about $10 million to $15 million more next year if the bill passes. Without it, they say, their payments are due to rise by 50%.

Steve Sweeney, the outgoing Democratic president of the state Senate, has said as many as four casinos could close without the relief provided by the bill, although no casino has publicly made that claim.

Sweeney said after the Senate vote that the bill is needed to help the casinos deal with the ongoing pandemic.

"It will continue the stability we have started in Atlantic City," he said, referring to past measures including a state takeover of Atlantic City and previous measures to reduce costs for the casino industry.

Revenue figures reported by the state show the casinos' overall numbers continuing to rise this year. But the casinos say those figures paint a distorted picture of their true financial condition by including money from internet gambling and sports betting with the money won from in-person gamblers.

Online and sports betting money must be shared with third party providers like technology platforms and sports books.

That is one big reason the bill excludes those two revenue streams — the fastest growing in Atlantic City's casino industry — from calculations on how much the casinos must pay in lieu of taxes.

The casinos say their core business — winning money from in-person gamblers — is down significantly from 2019, the year before the pandemic hit.

While the two newest casinos, Hard Rock and Ocean, have seen their in-person revenue increase since 2019, the seven other casinos are down a collective 22% since then, according to the casino association.

The head of the main Atlantic City casino workers union has endorsed the bill to prevent possible closures of one or more casinos, as has Atlantic City's mayor.

The first version of the bill was passed five years ago when Atlantic City was reeling from the closure of five of its 12 casinos.

Easily able back then to show that their businesses were worth less in a declining market, the casinos successfully appealed their property tax assessments year after year, helping to blow huge holes in Atlantic City’s budget.

The bill does not affect the state taxes casinos must pay on internet gambling revenue (15%) and online sports betting revenue (13%), nor the 9.25% tax on in-person casino revenue.