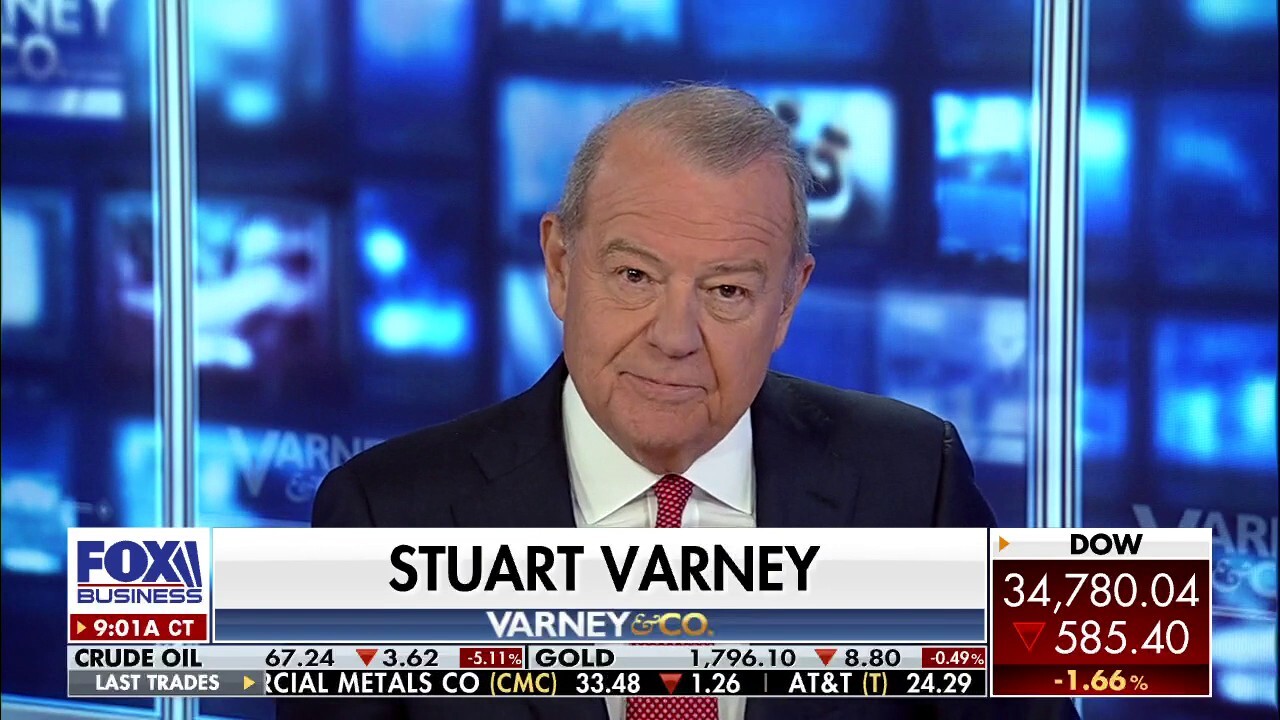 Stuart Varney on Manchin's 'no' bombshell over Build Back Better: Dems in self-inflicted civil war

FOX Business' Stuart Varney argues 'the Democrats will have to re-group, but it will be extremely difficult.'

In early November, when the House of Representatives passed the bipartisan infrastructure bill, a handful of moderate Republicans and progressive Democrats told everyone who would listen that doing so put Democrats' massive social spending bill at grave risk.

Both factions were handed an "I told you so" moment when Sen. Joe Manchin, D-W.Va., announced his opposition to the plan on "Fox News Sunday" this week.

"It's an outcome that we had warned about well over a month ago," Rep. Alexandria Ocasio-Cortez, D-N.Y., said on MSNBC's "Morning Joe" Monday. She and her fellow "Squad" members were among just six House Democrats to vote against the infrastructure bill. They wanted to block that legislation until the Senate produced a reconciliation bill to preserve leverage over moderates like Manchin.

"This is why I insisted on moving the infrastructure bill in tandem with the Build Back Better Act, and why I refused to leave my community behind when forced to vote for one without the other," Rep. Ayanna Pressley, D-Mass., also said.

Rep. Alexandria Ocasio-Cortez, D-N.Y., talks with reporters on Wednesday, June 30, 2021. She was one of the handful of House progressives to vote against the bipartisan infrastructure bill.  (Tom Williams/CQ-Roll Call, Inc via Getty Images / Getty Images)

"It completely took away the socialists' leverage and that is exactly why AOC and the ‘Squad’ voted against it," Rep. Nicole Malliotakis, R-N.Y., told Fox News. "We voted different ways for the same reason: Because we all knew that once infrastructure passed Build Back Better would die."

"Progressives tried to hold physical infrastructure funding hostage, even going as far as to vote against the bill, because they knew this would be the outcome," Rep. Andrew Garbarino, R-N.Y., told Fox News. "As I predicted, by passing the infrastructure bill, we significantly weakened Progressives' negotiating position and empowered Senators like Joe Manchin to stand up to the most radical element of the Democratic Party and against this massive spending spree."

The motivation behind progressives' and moderate Republicans' actions may have been different. But both were right where House Speaker Nancy Pelosi, President Biden, and former President Trump were wrong. Those three believed the social spending bill could pass even after it was separated from the infrastructure bill.

"Very sad that the RINOs in the House and Senate gave Biden and Democrats a victory on the "Non-Infrastructure" Bill," Trump said in a November statement. "They just don't get it! Now they'll go for the big kill – getting their second $1.9 Trillion Bill (really $5 Trillion) approved."

"This is transformational. And everything I mentioned, everything I mentioned, is supported by Sen. Manchin and Sen. Sinema," Pelosi said shortly before the House passed the infrastructure bill. "Everything that I just mentioned. There's some things that they may add, subtract or whatever. But 99 – over 90% of the bill was built House-Senate-White House."

"I look forward to signing both of these bills into law," Biden said in November after just the infrastructure bill passed.

But Biden only got one of the bills after the collapse of the Build Back Better Act – possibly Republicans' biggest political win of 2021. It was delivered partly due to Democrat leaders' miscalculation on Manchin – but also perhaps by moderate Republicans who bucked Trump and delivered more "yea" votes on infrastructure than progressive "no" votes.

"I think we would be in a very different situation right now had they still been tied together. I think both would have passed in some form and we would have been worse off today," Malliotakis said. "Socialists would have held the infrastructure hostage until they gave some of their agenda in some form of Build Back Better passed."

"We set it up so Manchin could kill the Build Back Better," she added.

"Attempting to add trillions in new social spending that would never go away was never going to attract Republican support and Senator Manchin’s realization of such now ends this long chapter with inflation concerns near the top of the list," Rep. Fred Upton, R-Mich., said. "Successfully unhooking the BBB from the BIF allowed us to truly focus on what this country really needed versus more unchecked inflationary spending."

President Biden holds a meeting on infrastructure with labor and business leaders at the White House in Washington, D.C., on July 22, 2021.  (REUTERS/Jonathan Ernst  / Reuters)

"Fred was always going to be a yes ... he helped write it with the bipartisan Problem Solvers Caucus," Fuerst said. "This is a good bill. This is going to benefit folks in southwest Michigan in communities that need lead pipes replaced. Our ports are a mess – let's invest in those needs so we can compete with the likes of China."

Democrats may still be able to pass some of their agenda over the next year using smaller bills on targeted policies. But Manchin will still have a veto over all of it, meaning they will likely only achieve a fraction of their agenda, if anything. Rank-and-file progressives blame Democratic leaders and even Biden himself for the situation.

"Honestly, I’m frustrated with every Democrat who agreed to tie the fate of our most vulnerable communities to the corporatist ego of one Senator. No one should have backed out of our initial strategy that would have kept Build Back Better alive," Cori Bush tweeted. "@POTUS, you need to fix this."

"The president did say that the … Build Back Better Act was promised, that, you know, he's got it. And we said, you know, with respect to the president, he can't. No one can really … promise a Manchin vote," Ocasio-Cortez said Monday on MSNBC. "Our leadership needs to step up and I think that we can do that. I do not believe that the situation is beyond repair, but it's going take a different kind of thinking to get out of it than it did to get into it."