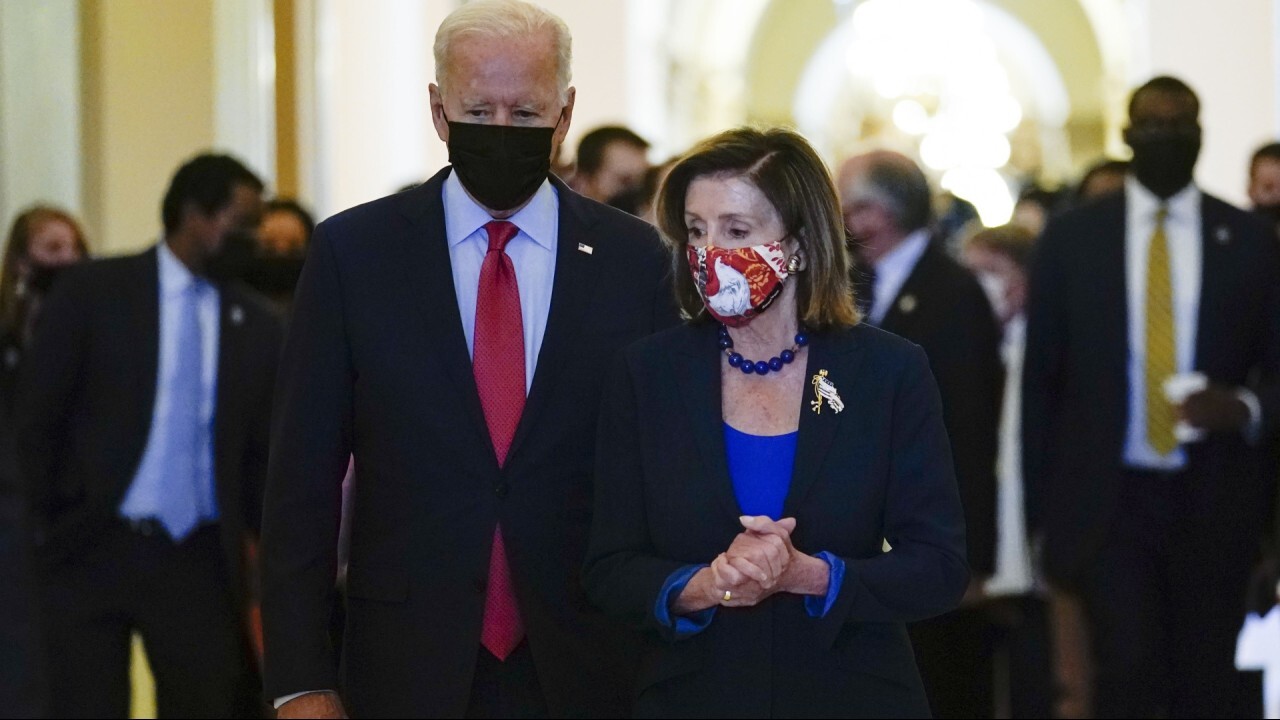 Inflationary pressures to arise if US sees above $2T in social spending: Market Expert

UBS Managing Director and Senior Portfolio Manager Jason Katz argues the U.S. 'has to watch what we wish for' when it comes to spending plans.

Democrats’ plans for trillions of dollars of spending on social programs could unleash more inflation at a time when prices are already accelerating at their fastest pace in 30 years, according to a new report from the Joint Economic Committee Republicans viewed exclusively by FOX Business.

Since the coronavirus pandemic, Congress has authorized $6 trillion in new spending via the American Rescue Plan, the CARES Act and other legislation while the Federal Reserve has purchased $4 trillion in assets to stabilize the economy.

The stimulus money boosted income and spending above where it would have been otherwise, causing a rise in disposable income as the economy shrank.

"Inflation is rising at its fastest pace in three decades, and it’s gnawing away at Americans’ wages, savings, and aspirations," said Utah Sen. Mike Lee, a Republican and the ranking member of the Joint Economic Committee.

"It’s making it harder for families to afford gas and groceries and make ends meet," he added. "In our research released today, the Joint Economic Committee found that these rising prices for everyday goods are being turbocharged by Congress spending money it simply doesn’t have. If we don’t stop this runaway train, inflation could get worse."

The Joint Economic Committee is a bipartisan group that studies matters related to the economy and makes recommendations on improving the economy.

The core personal consumption expenditures price index, which excludes food and energy costs and is the Federal Reserve’s preferred inflation measure, rose 3.6% year over year in August, the most in 30 years. Prices increased 0.3% for the month.

Rising prices are partly the result of the pace of the U.S. economy’s reopening, which has caused supply chain disruptions as materials and labor have been in short supply.

That has led to cost-push inflation, which occurs when businesses are forced to pass along their higher prices to consumers. Such inflation is likely temporary, according to Jackie Benson, senior economist for Joint Economic Committee Republicans.

She believes the more worrying concern is the demand-pull inflation that could occur as a result of government stimulus that shovels cash to consumers and causes demand to swamp supply.

President Biden’s proposed Build Back Better economic agenda would expand the nation’s social safety net by trillions of dollars by providing two years of free community college for all students, in addition to giving qualifying families up to $3,600 a child per year and expanding Medicare, among other things.

A separate $1 trillion bipartisan infrastructure bill is held up in the House after progressives said they would vote down the measure unless the social spending package was passed.

The social spending bill uses a combination of deficit spending and tax increases to pay for the plan’s $3.5 trillion price tag, which would grow to $5.5 trillion over 10 years if made permanent.

The legislation is stalled in the U.S. House of Representatives as Democrats attempt to lower the price tag to get moderate Democratic Sens. Joe Manchin of West Virginia and Kyrsten Sinema of Arizona on board.

Both Manchin and Sinema need to vote in favor of the plan in order for Democrats to use budget reconciliation to block a Republican filibuster and pass the bill with a simple majority.

Giving households more cash, either through stimulus checks or subsidies, will boost consumer demand at a time when the tax hikes helping to pay for the programs likely reduce business investment and hiring, according to Benson.

Rising inflation is not a given in the event the legislation passes, according to the report.

First, rising consumer demand could bring people back into the labor force. However, artificially increasing demand is unlikely to do so in an environment of rising COVID-19 cases and when supply-chain disruptions are prevalent. Tax hikes will also likely reduce hiring and investment.

Inflation would also be held in check if consumers hold back on spending in the event of a resurgence in COVID cases. However, prior increases in case counts have caused consumers to pull back on spending on services while stocking up on goods. This would result in even greater supply chain disruptions and more inflation.

There is also the chance that the reconciliation bill increases employment enough to offset the increase in demand through programs like the so-called Civilian Climate Corps. But that program is expected to provide 20,000 jobs – well short of the record 11 million job openings. Additionally, prior studies have shown federal job training programs typically fail to live up to expectations.

Inflation concerns have the Federal Reserve ready to act.

The central bank in September indicated it could begin tapering its asset purchases before the end of this year and start raising interest rates next year in order to combat rising prices.

"Unfortunately, if extraordinary spending levels continue, monetary tapering or even tightening may not have its intended effect," Benson concluded. "Congress should therefore consider the inflationary risks of continuing its recent pattern of ballooning government spending."