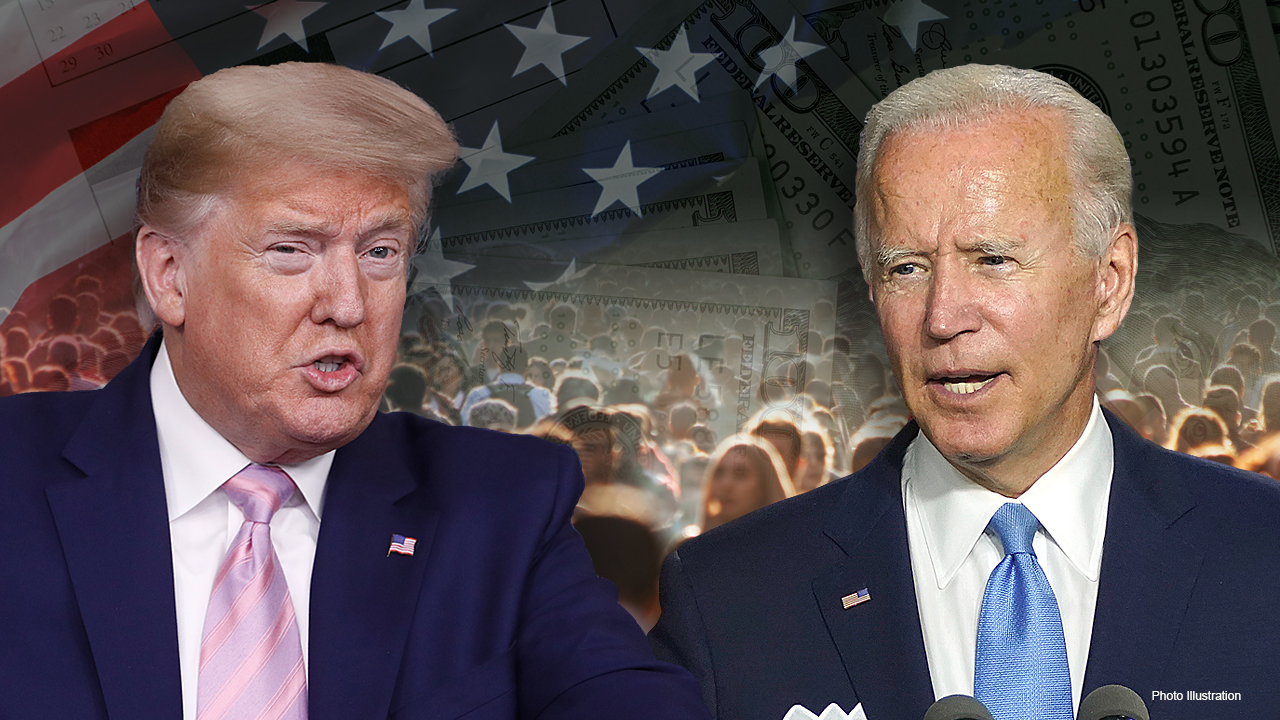 The Joe Biden-Kamala Harris ticket is ahead of the Donald Trump-Mike Pence ticket by a 51-46 percent margin. That 5-percentage point advantage sits right at the margin of sampling error of the latest Fox News survey, taken after the Democratic and Republican national conventions.

Majorities of likely voters have a positive opinion of Biden and trust him over Trump on coronavirus, Supreme Court nominations, and uniting the country -- and that nudges the former vice president just over 50 percent in the presidential race.

The national survey, released Sunday, is the first Fox News has conducted among likely voters this year and the first time it included running mates in the vote preference question.

Both tickets have secured the backing of their key voting blocs.  Biden leads among women, suburban voters, seniors, Millennials, Blacks, and Hispanics.  Trump is ahead among men, Whites, rural voters, veterans, White Catholics, and Gen Xers.

"Despite the often tumultuous events of the day, campaigns are often about partisan homecoming. Trump may be benefiting from this dynamic," says Republican pollster Daron Shaw, who conducts the Fox News Poll with Democrat Chris Anderson. "It looks like Republican-leaning undecided voters have come around, both in the ballot and his job ratings."

Voters also trust Biden over Trump on “policing and criminal justice” (+7), while the two are rated about evenly on “maintaining law and order” (Biden +2).

More describe the unrest in cities like Portland and Kenosha as riots rather than protests by a 48-40 percent margin, and more blame “left-wing radicals” than “right-wing radicals” when violence breaks out (39-33 percent).  Thirty percent of Democrats join 68 percent of Republicans in describing the unrest as riots.

When asked who can bring the country together, likely voters say Biden by a 13-point margin.

-- In the head-to-head matchup among registered voters, Biden gets 51 percent, up from 49 percent in mid-August before the conventions.  Trump garners 46 percent, up from 42 percent -- and the highest support he has received in a Fox News survey.

-- Overall, majorities favor mail-in voting options due to coronavirus (64 percent) and feel confident those ballots will be counted accurately (55 percent).  Most Democrats (71 percent) are confident in an accurate count of mail ballots, while most Republicans are not (60 percent).

-- Forty-nine percent expect to know who won by the day after the election, while 46 percent believe it will take two or more days.  Over two-thirds of Democrats (69 percent) and over half of Republicans (53 percent) are comfortable with the vote count going beyond election night.  Election officials in several states have warned that ballot counting may take longer than usual this year due to the pandemic.

-- Positive views on the economy are up: 38 percent say it is in excellent or good shape, up from 28 percent in August. In May, that number was 20 percent, the worst of Trump’s tenure.

-- While more than 8 in 10 remain concerned about coronavirus spreading and over half disapprove of how Trump has responded to the virus, there is increased optimism about the U.S. controlling the pandemic.  Thirty percent believe it is completely/mostly under control, up from 19 percent in August.  Another 30 percent think it is somewhat under control and 40 percent say “not at all.”  In July, a record 51 percent felt the virus was not at all under control.

-- Forty-eight percent approve of the job Trump is doing as president, up from 44 percent in August.  Some 51 percent disapprove.  His best job rating, 49-49 percent, was in April 2020.

-- Fifty-one percent think Trump will be re-elected. That’s up from 45 percent in July, but lags the 56 percent who felt that way in February.

Conducted September 7-10, 2020 under the joint direction of Beacon Research (D) and Shaw & Company (R), this Fox News Poll includes interviews with 1,311 randomly chosen registered voters nationwide who spoke with live interviewers on both landlines and cellphones. The survey includes results among 1,191 likely voters. The poll has a margin of sampling error of plus or minus 2.5 percentage points for both registered voters and likely voters.

Victoria Balara contributed to this report.