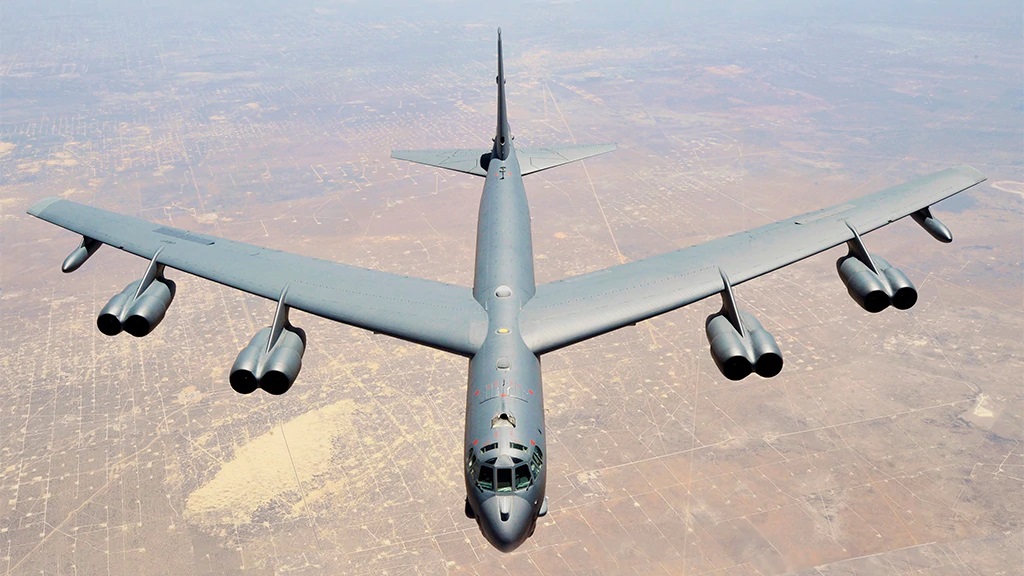 OVER THE EAST CHINA SEA -- "Go back," the Chinese air controller warned. "You are now approaching Chinese airspace. Turn around immediately or you will be intercepted."

The crew of the B-52 lumbering 100 miles off China's coast rebuffed the warning that crackled through the radio, and the 60-year-old aircraft stayed its course.

This was a bomber presence mission, a taxing flight designed to demonstrate the U.S. military's long reach and uphold the right of international passage in disputed airspace.

It was also a window into the Pentagon's plan to rely on aircraft from the earliest days of the Cold War to prepare for the wars of the future.

The February mission began at dawn at Andersen Air Force Base in Guam when the aircrew donned oxygen masks and "poopy suits," puffy outer garments to keep out the cold in case the plane was forced to ditch in the ocean.

Then the bomber, far older than the crew flying it, rumbled down the runway, relying on analog dials and aging radar to zigzag over the Pacific and maneuver inside the "air defense identification zone" that China has declared but the U.S. refuses to acknowledge.

After nearly two decades of waging counterinsurgency warfare in the Middle East and Afghanistan, the Defense Department has turned its focus to "great power competition," its buzz phrase for a major shift in spending and programs to counter China and Russia.

The retooling is a costly reckoning for a military that was stretched by fighting militant groups and focusing on lesser dangers posed by rogue states in northeast Asia and the Middle East. The strategy has been broadly embraced by Lloyd Austin, President Biden's defense secretary, who must now find a way to resource it.

The Marines are getting rid of their tanks and instead are developing the ability to operate from western Pacific islands to bottle up China's fleet. The Army recently conducted tests of its ability to harness artificial intelligence and a network of sensors to take the fight to its foes. The Navy is pursuing the development of unmanned ships.

The strategic pivot, however, has been a particular boon for long-range bombers, which the U.S. is using to signal that it can project power around the globe as Covid-19 hobbles the home front.

To sneak through sophisticated enemy air defenses, the service is developing the futuristic B-21 "Raider" bomber: a stealthy flying wing. To fill out its fleet, it is also counting on the B-52 Stratofortress, an aircraft designed in 1948 with a slide rule.

"It is like an old truck that was built when they actually built them tough," said Gen. Charles Q. Brown, the Air Force's chief of staff and a former commander of its forces in the Pacific. "The challenge you have with a platform like that now is how to bring in new technology and capability."

Like an old house getting an extreme makeover, the plane's durable air frame will be preserved while its fuel-guzzling engines, vintage radios, analog instrument dials and internal weapons bay are replaced with the most modern systems.

So essential is the B-52 to the Air Force's long-term plans that 76 of them will fly until at least 2050. By then, the youngest will be nearly 90 years old. Some generals say the plane might live to celebrate its centennial, besides outlasting the hairdo named for it in the 1960s, which was later made a band name.

How the Air Force has come to rely on such an unorthodox solution for the coming decades is the product of decisions made years ago when the Pentagon assumed the Cold War was over and then spent years fighting militants in the Middle East.

The reliance on the vintage bomber also reflects the lengths the Pentagon has gone to reorient itself for a world of great-power conflict, as it struggles to maintain its inventory while simultaneously pursuing cutting-edge technology in the face of a mounting federal deficit.

Conceived at the dawn of the nuclear age, the B-52 had an original role of deterring, and if need be fighting, a nuclear war. The eight-engine plane, with a wingspan almost two-thirds the length of a football field, was nicknamed the BUFF, which in polite company stands for the "Big Ugly Fat Fellow."

In the 1960s, a dozen B-52s loaded with nuclear weapons were kept on continuous airborne alert, their bellies painted glossy white to reflect the heat of a potential nuclear blast, under a mission code-named "Chrome Dome."

"It was designed to withstand the stresses and strains of combat in a nuclear-weapons environment," said Mark Gunzinger, a former B-52 pilot who now directs the nonpartisan Mitchell Institute for Aerospace Studies.

Nonnuclear conflicts gave the B-52 a combat role. Designed to carry two nuclear bombs, it was refurbished to hold 60,000 pounds of conventional bombs in the Vietnam War.

The development of air-launched cruise missiles provided B-52s with what the Pentagon calls a "standoff" capability, a means of launching weapons from a safe distance. The B-52 took on that role at the start of the 1991 Persian Gulf War, and the plane became a platform for dropping satellite-guided bombs on militants in Afghanistan, Syria and Iraq, including the battle that retook Mosul from Islamic State.

While it was able to adapt, other bomber programs ran into headwinds. The first replacement for the B-52 was supposed to be the B-70, which was intended to fly very fast and high but was scratched after the Soviet Union oriented its air defenses on that threat.

The Air Force developed B-1B "Lancer" bombers, which were designed to fly low with their adjustable wings swept back but took on unanticipated stress when used in high-altitude missions in Afghanistan and the Mideast with their wings forward.

Stealthy B-2 "Spirit" bombers the Air Force developed used cutting-edge technology, but the program was slashed to 21 aircraft from an original 132 when tensions with Moscow eased and budgets tightened, pushing the cost of each copy above $2 billion.

Pentagon disputes, meanwhile, delayed development of a Next Generation Bomber. Concerned that the Air Force's proposal could lead to spiraling costs, Defense Secretary Robert Gates sent it back to the drawing board in 2009 and told the Air Force to stick to proven technology.

In 2018, growing friction with a rising China and renewed tensions with Russia changed Pentagon thinking and led Jim Mattis, by then the defense secretary, to identify the two nations as the U.S.'s principal threats for decades to come.

The strategic shift gave a boost to the development of an array of air war systems, among them "loyal wingman" drones that would fly in formation with piloted jets. It also was the beginning of a new golden age for long-range bombers.

Air Force generals last year called for the service to have at least 220 bombers for conventional missions, while sustaining the nuclear triad that includes long-range bombers plus land- and submarine-based missiles. The bomber goal meant a big jump from the 158 planes in the current fleet.

The Air Force moved ahead with a new bomber called the B-21, which is expected to begin entering the service's inventory in the middle to late 2020s. It is hoping to field at least 100 of them. To sustain its bomber fleet, the service decided to extend the life of its B-52s while saving funds by gradually phasing out its tiny fleet of B-2s and battle-weary B-1Bs.

"Part of the reason the Air Force is so dependent on B-52 modernization is that other proposed successors did not work out along the way," said Jeremiah Gertler, the military aviation analyst for the Congressional Research Service. "The Air Force decided it needed capacity more than capability."

The B-52 is a plane with no hope of evading stiff antiaircraft defenses. And its fuel-guzzling engines were no longer made, requiring the Air Force to rely on a dwindling reserve of engines and parts.

The plane, however, could fire long-range missiles and carry satellite-guided bombs and mines. And alone among current Air Force bombers, it could be equipped with nuclear-tipped cruise missiles, its sole remaining nuclear capability.

The B-52s had another advantage: They had been bought and paid for, at an original cost of a little more than $6 million apiece.

"You can't even buy a Learjet for that these days," said Alan Williams, a former B-52 radar navigator who now is the B-52 deputy program manager at the Air Force's Global Strike Command.

By overhauling the bomb bay, the Air Force saw ways to boost the B-52s' firepower further. That would enable them to carry eight precision-guided weapons internally plus the 12 they can lug on their wings. With new pylons, they could also carry superfast hypersonic missiles the service is developing that are projected to travel 1,000 miles.

Rolls-Royce Holdings PLC, General Electric Co.'s GE Aviation and the Pratt & Whitney unit of Raytheon Technologies Corp. are competing for the contract to sell 608 new engines for the B-52, which would cost billions but are projected to save money in fuel.

So by the late 2030s, the U.S. bomber fleet will be made up of polar opposites: The sleek B-21, designed to slip past enemy air defenses, and the ungainly B-52, which presents a huge cross section to enemy radar but can lob ordnance from afar.

The U.S. strategy faces an array of challenges, including a potential flare-up with Iran that would distract the Pentagon from its "great power" mission. Mr. Gertler also suggested the Pentagon might rethink its decision to keep extending the life of the B-52 in the mid-2030s and channel the savings toward buying more B-21s.