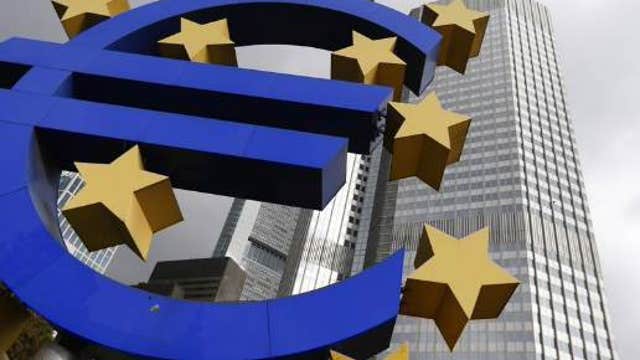 European Central Bank members are all prepared to take more policy action if necessary and the bank's staff will prepare the groundwork in case, President Mario Draghi said on Thursday.

The ECB kept interest rates at a record low 0.05 percent at it monthly meeting, waiting to see how stimulus measures laid out in recent months unfold.

Draghi said risks to the euro zone's recovery remained skewed to the downside and told a news conference: "The Governing Council is unanimous in its commitment to using additional unconventional instruments within its mandate.

"The Governing Council has tasked ECB staff and the relevant Eurosystem (central bank) committees with ensuring the timely preparation of further measures to be implemented if needed," he said.

After the U.S. Federal Reserve ended its bond-buying program while the Bank of Japan increased its pace money creation, markets are trying to judge how close the ECB is to launching more aggressive steps, such as quantitative easing money-printing to buy large amounts of government bonds.

There has been mounting discomfort over Draghi's leadership style.

Reuters reported on Tuesday national central bankers in the euro area planned to challenge Draghi over his communication style and in particular his mention of a balance sheet target for how much money the ECB planned to pump into the economy after the Governing Council agreed not to make any figure public in September.

Draghi reaffirmed that target, saying the balance sheet would "move towards the dimensions it had at the beginning of 2012".

He added that the policymaking Governing Council had signed up to that unanimously but nodded to some policy differences.

"When we differ in our views and our policies ... there is no drawing of a line between North and South. There is no coalition, not at all," Draghi said.

The euro hit a 26-month low and peripheral European bond yields fell after he affirmed the target and highlighted risks to economic growth. [FRX/]

To keep the euro zone from slipping into deflation, the ECB has started pumping more money into the banking system through purchases of private debt and offers of long-term loans, aiming to boost its balance sheet by up to 1 trillion euros.

There is growing doubt whether its current measures will be enough, but the ECB is expected to wait until it gets a clearer view of the impact of its asset purchases and four-year loans to banks before adding further stimulus.

Sources close to the ECB have told Reuters that its plan to buy private-sector assets may fall short of its goal and pressure is likely to build for bolder action early next year, firstly moving into the corporate bond market.

"My sense is that it's not sufficient and that we will see the ECB stepping up and buying corporate bonds," said Moody's Analytics chief economist Mark Zandi, pointing to next year.

The Paris-based Organisation for Economic Cooperation and Development (OECD) called on the ECB to live up to a promise "to do what ever it takes" to revive its economy and begin purchasing government bonds.

Some economists are looking towards December when the ECB will update its economic projections.

ECB staff in September forecast growth of 0.9 percent this year and 1.6 percent in 2015, with inflation reaching 1.4 percent in 2016 - still below its target of just under 2 percent. Inflation stood at 0.4 percent in October.

"The ECB will have to slash its staff projections for growth and inflation substantially in December. That will be a strong argument for loosening policy further," said Berenberg chief economist Holger Schmieding.