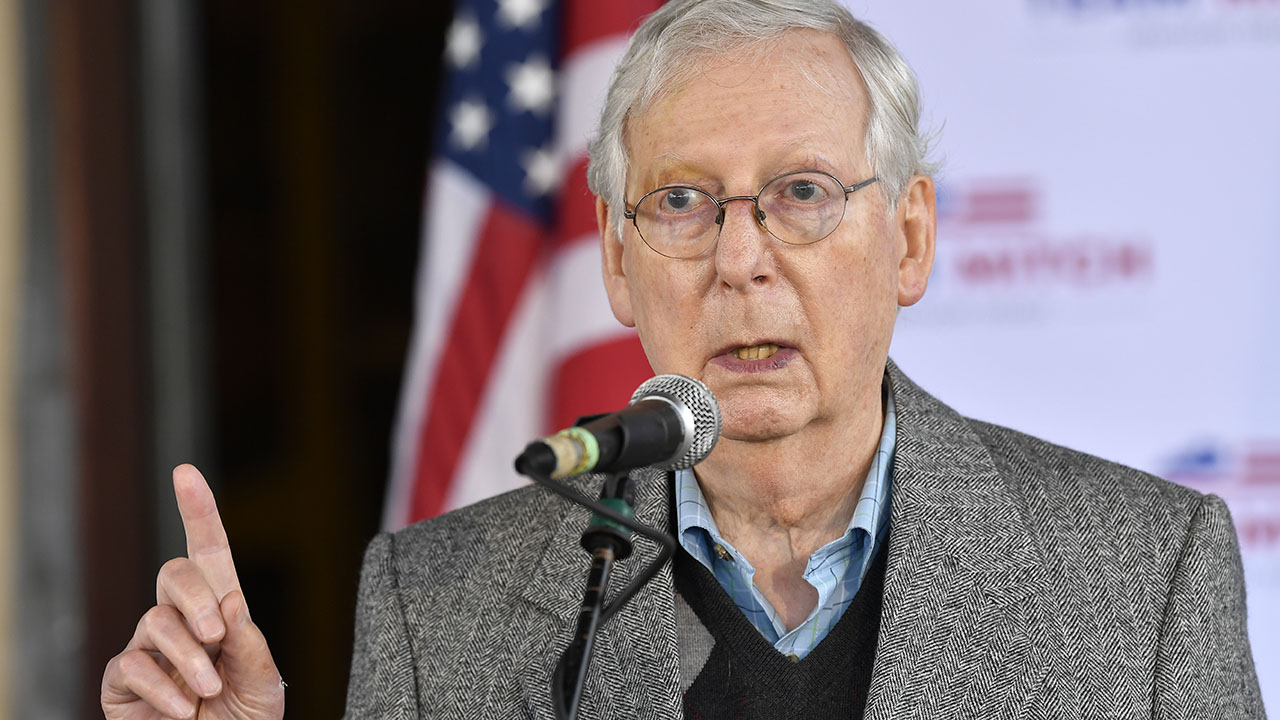 After several days of increasing optimism about the prospect that Congress could come to an agreement on a coronavirus stimulus bill, talks appeared on the edge of falling apart Thursday as Senate Majority Leader Mitch McConnell and Democrats are stuck on the point of federal aid for state and local governments.

"While Democrats hold the Paycheck Protection Program hostage over controversial state government bailouts, family businesses are closing their doors," McConnell, R-Ky., said in floor remarks Thursday. "Our Democratic colleagues have not even let us pass non-controversial money to invest in vaccine distribution. Not unless the two parties settle a whole list of issues that are controversial the way they want."

McConnell doubled down on his comments Friday, saying he offered to drop Republicans' demand of liability protection for businesses in exchange for Democrats dropping their demand for "bailouts."

The signal from McConnell, likely to tamp down on optimism congressional leaders have expressed in recent days, comes as Fox News is told that the bipartisan Senate coronavirus plan, sponsored by a group that includes Sens. Joe Manchin, D-W.V., and Susan Collins, R-Maine. is just "talk."

In this Oct. 28, 2020, file photo, Senate Majority Leader Mitch McConnell, R-Ky., speaks to supporters in Lawrenceburg, Ky. McConnell signaled Friday that funding for state and local governments could be a sticking point for his caucus on a coronavir

Fox News is told that rank-and-file Republican senators criticized the plan during a meeting earlier this week and that many in the Senate Republican caucus still oppose the "controversial" efforts to send money to state and local governments.

The logjam follows multiple "targeted" Republican proposals that have been filibustered by Senate Democrats and Republicans' consistent refusal to significantly increase the size of the price tag they are willing to accept on the bill.

In another signal of how far off a coronavirus deal may be, the House closed down business Thursday until at least Tuesday evening, with Majority Leader Steny Hoyer, D-Md., advising members that votes on a coronavirus proposal and an omnibus spending bill could happen "as early as 6:30 p.m. on Tuesday, December 15th," but that the schedule beyond that could be "very fluid."

Meanwhile, a group of strange bedfellows in President Trump, Sen. Josh Hawley, R-Mo., Sen. Bernie Sanders, I-Vt., and Rep. Alexandria Ocasio-Cortez, D-N.Y., are pushing for another round of direct stimulus checks to Americans -- something that was not included in the proposal introduced by Manchin, Collins and other moderates.

This also comes as Congress is struggling to align on a stopgap measure to prevent the government from shutting down at midnight Friday night into Saturday morning.

After indications that he might hold up a defense authorization bill, Sen. Rand Paul, R-Ky., backed down, clearing the way for a 12:30 p.m. vote on the matter and significantly decreasing the chances of a government shutdown.

But Sanders has said he objects to passing the government funding bill without $1,200 per American in stimulus checks. If Sanders stands his ground on that demand, the Senate could still fail to pass its stopgap government funding measure Friday.

And the same problems might arise next week too, as the over-arching spending bill that would fund the government into next year does not yet exist. There's a possibility another stopgap measure could be needed before Christmas. And the possibility that the Senate and House could need to override a Trump veto of the defense bill.

The government shutdown could still be averted, however, if Sanders backs down on his demand and allow the Senate to pass both bills with unanimous consent.

This is all before Congress would get to the issue of coronavirus relief. But both sides still say they are committed to passing legislation on the pandemic before adjourning for Christmas -- it's just not clear how and when such a deal will come together given how both sides have dug in on their demands.

Fox News' Chad Pergram and the Associated Press contributed to this report.