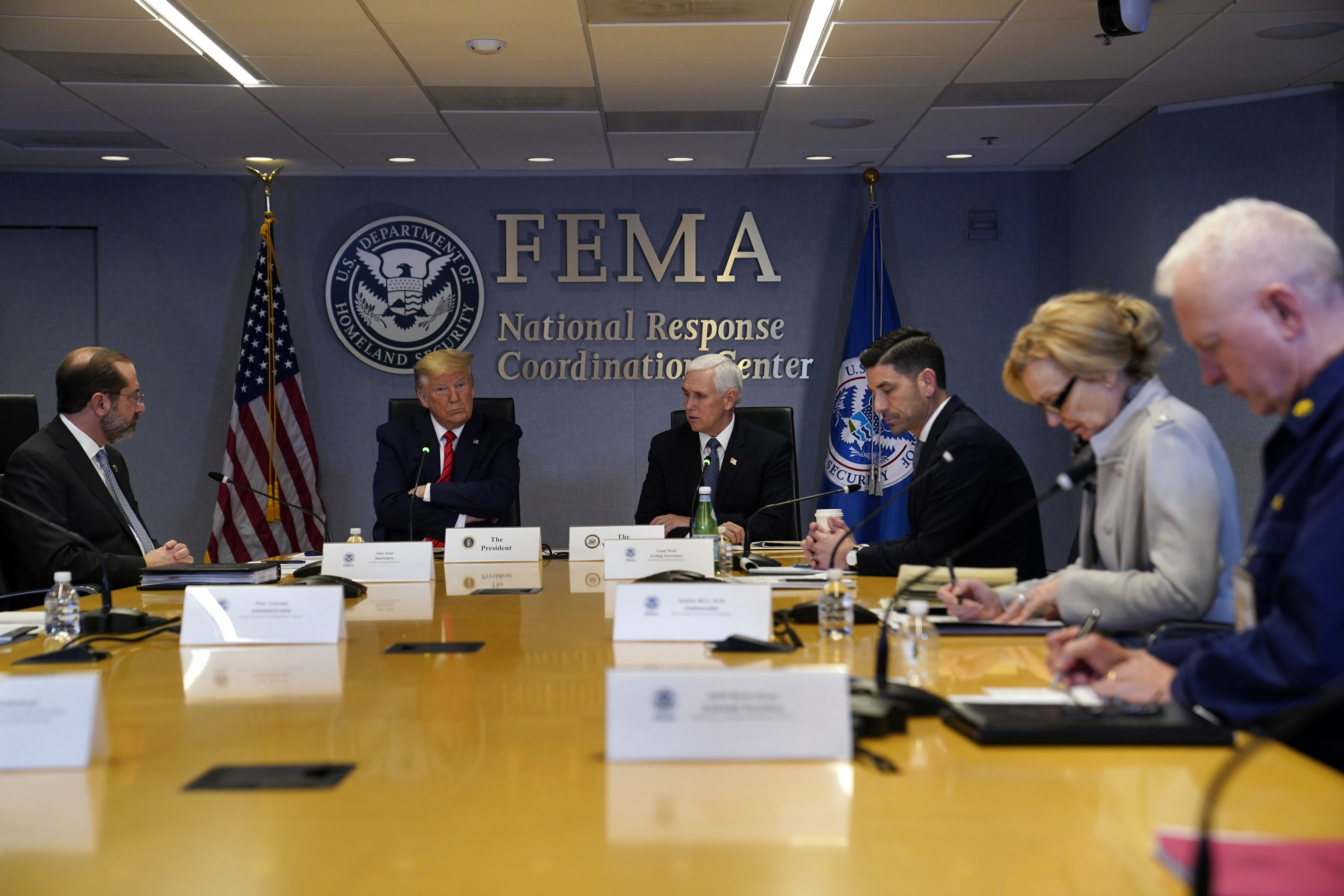 WASHINGTON — It was early on a Friday when Jared Kushner said he received a call from his father-in-law, President Donald Trump. Trump was hearing from friends in New York that the city's public hospital system was running low on critical supplies to fight the new coronavirus — something city officials, nurses and doctors had been saying for weeks.

Kushner, who has taken a lead role in the federal government's response, called Dr. Mitchell Katz, who runs the city's hospital system, to ask what was most needed.

And not long after, Trump was on the phone with New York Mayor Bill de Blasio announcing that the Federal Emergency Management Agency would be sending a month's worth of N-95 masks to the city's front-line workers.

“The president’s been very, very hands-on in this," Kushner told reporters. “He’s really instructed us to leave no stone unturned.”

It was a happy ending to one chapter of a dreadful story: Critical supplies went to a place with critical needs.

But the president's intervention underscored what watchdogs say is a troubling pattern when it comes to how the Trump administration is doling out lifesaving resources. Despite building a data-driven triage system in which FEMA allots supplies based on local needs, those who are politically connected and have the president’s ear have, at times, been able to bypass that process and move to the front of the line.

White House officials reject the notion that the process is being circumvented, stressing that everyone has been working to quickly get supplies to the places that need them most. That includes navigating complicated global supply chain issues and coordinating complementary efforts by private companies like Apple and billionaires including New England Patriots owner Robert Kraft, casino magnate Sheldon Adelson and Chinese business giant Jack Ma. If state and local leaders need assistance, they said, all they need to do is call.

“It’s outrageous that some would even speculate that the resources being delivered by the federal government to the states is somehow based on politics,” said White House spokesman Judd Deere. “This is about saving lives."

But sometimes it helps to know those in charge.

It was just after 8 p.m. last Saturday when Republican Rep. Lee Zeldin of New York took to Twitter to sound the alarm about critical needs on Long Island, a coronavirus hotspot with about 25,000 people infected. Suffolk Count's stockpile had run out of personal protective equipment — PPE — needed by local hospitals, nursing homes and first responders, including masks and gowns.

“We need fellow Americans who can help to PLEASE send us PPE ASAP!” Zeldin wrote.

CRIME DROPS AROUND THE WORLD AS COVID-19 KEEPS PEOPLE INSIDE

Minutes later, his call was answered.

“I posted a tweet and I received a call within minutes — literally within minutes — from Jared Kushner wanting to help,” said Zeldin. A day later, the congressman said, 150,000 surgical masks were delivered by a company he'd been connected with by someone close to the White House who had also seen his message. And 250,000 N-95 masks were delivered by the federal government days later.

“Honestly I couldn’t be happier with how quick the turnaround has been,” Zeldin said earlier this week.

While Zeldin isn't considered a top Democratic target, Trump has also helped vulnerable Republicans secure supplies, raising concerns from critics that he may be using the shipments to bolster political allies.

The president tweeted Wednesday that he would be “immediately sending 100 Ventilators to Colorado" at the request of Sen. Cory Gardner, a Republican who is considered among the party’s most vulnerable senators. To Colorado Rep. Diana DeGette, a Democrat, that looked like “playing politics w/ public health.”

On Friday, another vulnerable GOP senator, Martha McSally, took to Twitter to relay the “huge news” that Arizona would be getting 100 ventilators and to thank “President Trump and @VP for hearing our call.”

Allies of the president have intervened in other ways. Republican fundraiser Ray Washburne helped arrange a call between Trump and high-end restaurateurs including Wolfgang Puck and Jean-Georges Vongerichten, a tenant of Trump International in New York. Trump quickly embraced a proposal to restore the tax break allowing corporations to fully deduct the costs of restaurant meals and entertainment.

“I’ll just get the president on the phone,” Washburne recalls telling the group. “He was fantastic.”

Members of Trump’s private Mar-a-Lago club also have contacted the White House, asking for advice about where to send supplies they had privately procured.

Noah Bookbinder, executive director of Citizens for Responsibility and Ethics in Washington, a government watchdog group, said it's always problematic when presidents make decisions based on what they're hearing from friends, business associates and customers.

“But when we're talking about life and death decisions that will affect the future of not just individuals but whole communities, it’s particularly appalling that these decisions are made based on the whim of the president and the input of the people who happen to have his phone number," Bookbinder said.

N95 respiration masks at a laboratory of 3M, that has been contracted by the U.S. government to produce extra marks in response to the country's novel coronavirus outbreak, in Maplewood, Minnesota. (REUTERS/Nicholas Pfosi)

Billionaire philanthropist Ken Langone, namesake of New York's NYU Langone Medical Center, panned the idea that anyone was receiving special treatment and applauded the administration's efforts to make sure everyone gets what they need.

“I’m very impressed with the team effort that’s going on," he said, adding, “I wish my having known Trump had got me special treatment."

"There is none of that ... otherwise we wouldn’t have shortages."

As for Zeldin, the congressman said he had been relying on the process set up by the White House, in which states go through FEMA to get supplies. But “when the stockpile gets down to zero," he said, “then you have to find another way.”

In any case, he said, now isn't the time to point fingers.

“There will be an after-action report that is done here and part of what will be done here is analyzing the process of how the federal government communicates and works with the states and how the states communicate and work with the counties," he said. But for now, “Everyone's in the same foxhole with their rifles pointed in the same direction and that’s the only way to get through this."